As we approach the business end of the 2018 Australian Open, the chatter has increased at Melbourne Park. Are we staring at a possible 2017 Men’s Final rematch between Switzerland’s Roger Federer and Spain’s Rafael Nadal?

It’s not surprising really. Federer is the defending champion, and regarded by many people as the Greatest of all Time (GOAT), with 19 Grand Slam tournament wins.

Fellow 2017 finalist Nadal is also rightfully included in GOAT conversations, given his 16 Grand Slam wins (second on the overall list behind Federer) and his dominant win-loss record over Federer 23–15 (9–3 in the Slams).

Read more: Three key steps are linked with success in the Australian Open

So what are some of the reasons for their success? 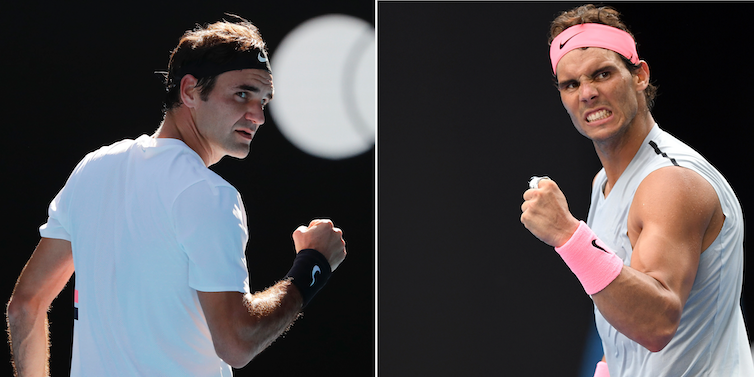 The Tennis Australia Game Insight Group (GIG), in partnership with Victoria University, has analysed data from Federer and Nadal’s performances at the Australian Open over the past six years to provide some insights into what separates these two masters from the rest.

Both players are elite “clutch” performers – that is, they win more of the big points than the rest. Traditionally the only way to infer a player’s clutch ability was to crudely count the number of break points won.

But the GIG now mathematically determine the relative importance of every point in a match to produce a clutch index. 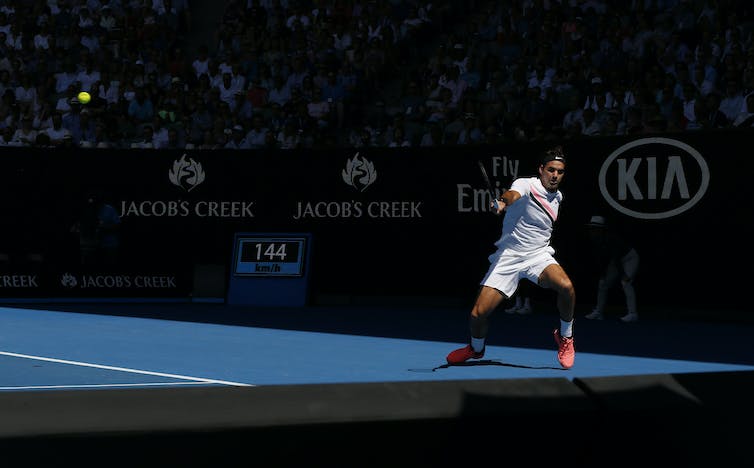 Roger Federer during his fourth round match at the 2018 Australian Open Grand. AAP Image/Narendra Shrestha

As can be seen in the table below, Federer reigns supreme on this index of pressure performance.

Nadal is renowned for his physicality on the court. The GIG workrate measure considers a player’s total lower body energy expenditure, or how hard a player is working. 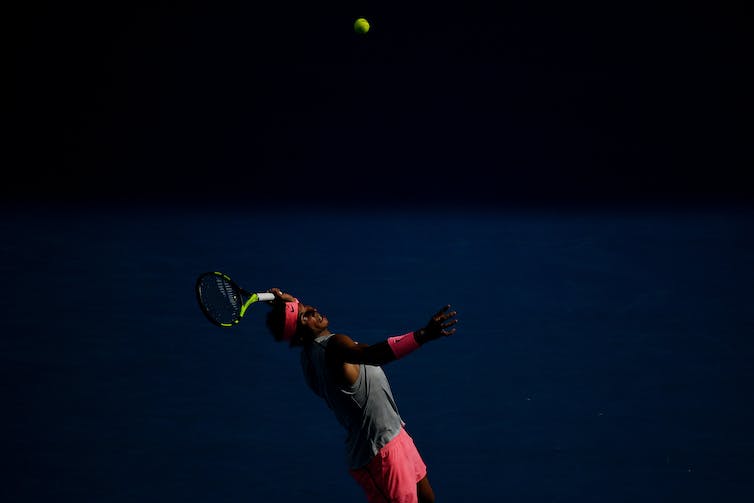 Rafael Nadal during round four at the 2018 Australian Open. AAP Image/Lukas Coch

While Nadal tops this list, Federer’s physicality is not necessarily explained by his workrate, which is actually low in the table (above).

Instead, the pillar of Federer’s physical success seems more tied to the perception that his movement is effortless. His ability to produce force quickly from a wide and deep split-step is reasoned to be the foundation for his balance and agility.

He dictates play by controlling court position. His contact point on return of serve is more than 30cm further forward into the court than other Top 10 players. Similarly, during rallies he is 40cm further forward. 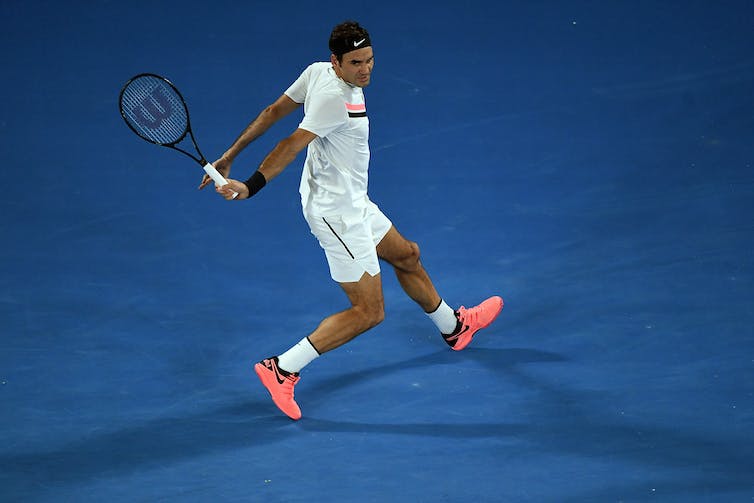 Roger Federer during round two of the 2018 Australian Open. AAP Image/Lukas Coch

Federer’s ability to play further up the court is because he can forecast ahead of time what’s likely to happen next. He can read both an opponent’s posture as they commence their serve (such as a ball toss location telling him a likely serve direction) as well as their preferred patterns of play (such as shot locations based on score probabilities).

This is evidenced in his return of serve reaction time in the table (above). 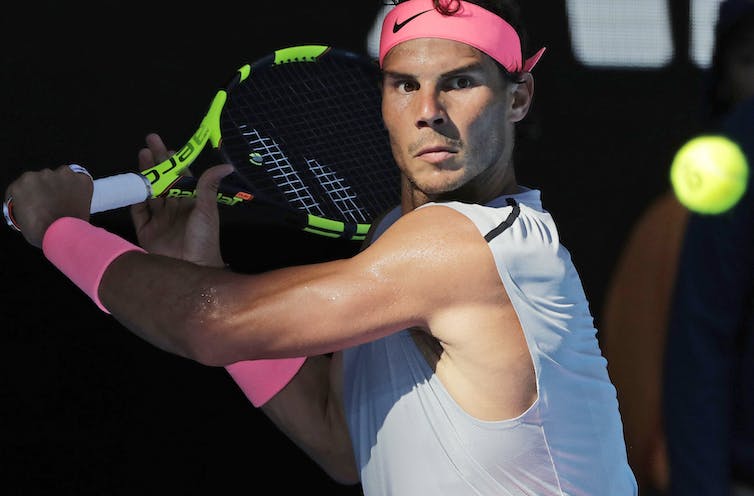 Rafael Nadal in action during his second round match at the 2018 Australian Open. EPA/Mark Cristino

Nadal is also tactically brilliant but in a very different way. He positions his serve to guarantee he gets to hit as many forehands (his preferred weapon of choice) as possible. Statistically he gets his wish 12% more often than the Top 10 average.

In simple terms tennis requires you to be able hit hard and fast with as much accuracy as possible. Sound swing mechanics is how this is achieved. 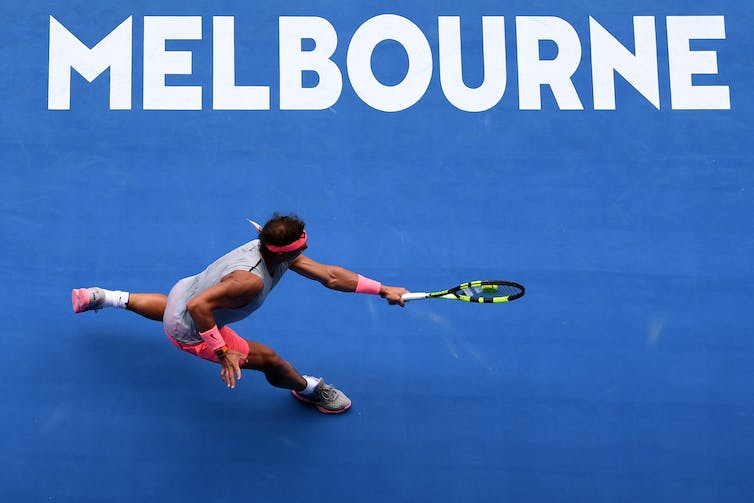 Rafael Nadal playing from the back of the court during round four at the 2018 Australian Open. AAP Image/Lukas Coch

Again our two GOATs achieve this in different ways. As evidenced by his impact position statistics, Nadal stands much further back than most players, affording him a big wind-up. In turn, when he hits a return of serve he does so at a speed that is 5% higher than the Top 10 average. 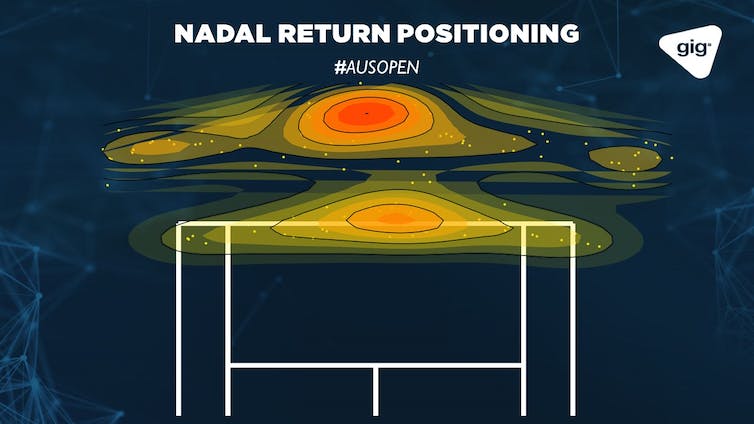 Again, in contrast to Nadal’s brute force, Federer is known for his deft touch and all-round wizardry with a racquet in his hand.

One particular technical feature of note is the consistency of his serve. While not the fastest, it presents a perennially difficult challenge for his opponents. 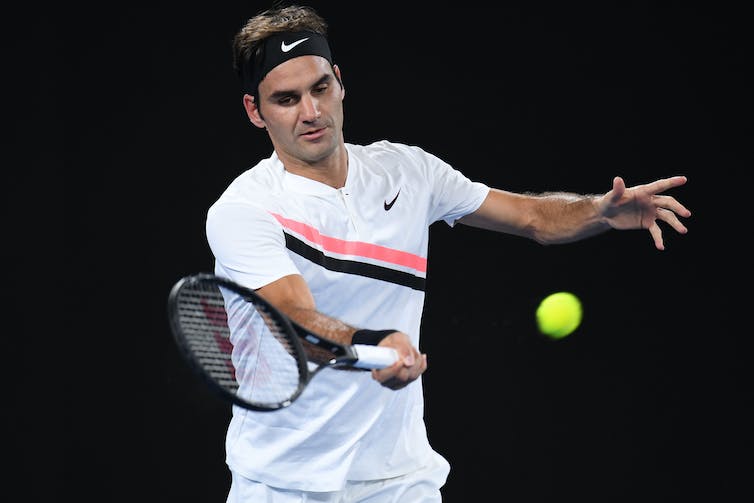 Roger Federer during round two of the 2018 Australian Open. AAP Image/Dean Lewins

The serve has metronomic rhythm, a technical similarity that makes it difficult to determine where it is being directed, and an accuracy that means he hits the corners with regularity.

Many of the qualities described above are inter-related.

Federer has an all-round game with no obvious weaknesses, an impenetrable mindset, and tactical superiority that allows him to work within his physical limits.

Nadal is physically elite, he wins the points that matter, and has a tactical approach that is perfectly suited to his technical strengths.

Both players are the elite of the elite, yet they play the game in very different ways which makes such comparisons all the more interesting.

So what are the chances of both players making it through to the men’s singles final on Sunday?

From the latest GIG analysis it’s looking hopeful for Federer but whether we’ll get a repeat of last year’s final with Nadal is still open.