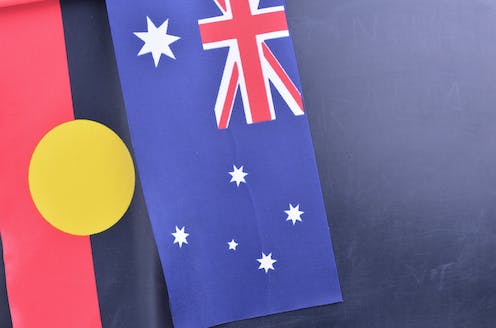 As the debate continues over whether Australia Day should be celebrated on January 26, this series looks at the politics of some unresolved issues swirling around Australia Day – namely, the republic and reconciliation. And just for good measure, we’ll check the health of Australian slang along the way.

Recent moves to promote changing the date of our national day are informed by the fact that many Australians – both Indigenous and non-Indigenous – feel they cannot celebrate on January 26, because that date marks the commencement of a long history of dispossession and trauma for Aboriginal and Torres Strait Islander people.

We’ve changed the date before – in fact, January 26 has only been a national public holiday since 1994 – and must do so again if we want to achieve a national day that unifies all Australians.

Still, there is a strong contingent of Australians who do not agree.

Before we can settle on a way forward, there is more work to be done in terms of raising awareness of the fraught symbolism of January 26, and what Australia stands to gain by changing the date of our national day to one that represents the shared values of modern Australia.

Thinking about exactly what we are celebrating

There are differing interpretations of what it means to celebrate on January 26. But what’s indisputable is the historical origin of the date.

Read more: Why Australia Day survives, despite revealing a nation’s rifts and wounds

Arthur Phillip arrived at Sydney Cove and raised the national flag of the United Kingdom on January 26, 1788. In doing so, he founded the colony of New South Wales and, at the same time, commenced the dispossession and marginalisation of Indigenous people.

The tradition of observing January 26 began a few decades later, in the early 1800s, but only in NSW. It was referred to by various names in the following years, including First Landing Day and Foundation Day. Other colonies – namely South Australia, Western Australia and Tasmania (then Van Diemen’s Land) – celebrated their own colonial foundations, which took place on other dates.

It took another century before the states and territories agreed, in 1935, to a common name (Australia Day) and timing (the Monday nearest to January 26) of celebrations. And it wasn’t until 1994 that the decision was made to make January 26 a national public holiday.

What does celebrating January 26 actually mean?

As the history books indicate, January 26 festivities were initiated to mark the arrival of the first British colonists and the establishment of a British colony on the east coast of Australia.

This history involves a period of conflict that continued until the 1960s, as well as government policies of assimilation, separation and dispossession. During this time, many Indigenous people were removed from their traditional lands, and stopped from practising their language and culture.

Today, Indigenous peoples are still recovering from the chain of events that were set in motion on that day in 1788. The ongoing impact can be seen in disturbing rates of Indigenous incarceration and the growing overrepresentation of Indigenous children in out-of-home care, to give just two of many examples.

Another problem with holding our national day on January 26 is that it is a day that positions European settlement as the primary source of national identity and pride. In doing so, it ignores more than 60,000 years of pre-colonial history and 230 years of multicultural migration to Australia.

By changing the date, Australia can show that it is ready to truly accept and include Indigenous histories, cultures and contributions as a valued part of the Australian story.

While not all Australians agree that a change of date is needed, it’s clear this is an issue that is not going away. More and more Australians are asking: “why not?”

Read more: First reconciliation, then a republic – starting with changing the date of Australia Day

This year marks the 80th anniversary of the first Day of Mourning at Australia Hall in Sydney, where Aboriginal and civil rights activist Jack Patten told attendees that “Aborigines have no reason to rejoice” on Australia Day.

All these years later, changing the date remains a relatively simple procedure that would have an immense symbolic impact. It would demonstrate to Indigenous Australians that the broader community wants a national day on which all Australians can celebrate together.

While figures on the other side of the debate suggest a push to change the date is divisive, #changethedate is – at its heart – a movement that seeks to bring us closer together. That’s what reconciliation is about: recognising and healing the past so that we can build a better and more unified tomorrow.

On January 26, I call on all Australians to thoughtfully consider the following: can our national day ever be truly inclusive if it is celebrated on a day that represents the physical and cultural dispossession of the First Australians?

Until Australia is ready to change the date, Reconciliation Australia will continue to share the knowledge that is necessary to help more Australians realise the undeniable answer to this question.

Catch up on others in the series here.