The rise of the #MeToo and Time’s Up movements have put an unprecedented focus on the issue of what is acceptable sexual behaviour. An explosion of high-profile allegations in the Hollywood movie industry and in the Australian theatre scene have only added to the public scandal.

Of all the allegations of sexual misconduct swirling in Hollywood, the case involving Aziz Ansari is most divisive, because it centres on what constitutes consent. There is now pressure to move away from consent that can be implied or inferred, to a pure affirmation model, where only yes means yes.

The extent of the problem

The Australian Bureau of Statistics (ABS) defines sexual assault as an act of a sexual nature carried out against a person’s will or without a person’s consent. It involves physical contact and/or the use of physical force, intimidation or coercion.

The Australian Institute of Criminology indicates that the rate of sexual assault recorded by police in Australia has increased steadily since 2012.

According to ABS figures from 2015–16, during the 12 months prior to interview, 77,400 Australians aged 18 years and over (0.4% of the population) experienced sexual assault. However, under-reporting was prominent. Only some 30% of matters were reported to police.

Of those sexually assaulted, 21% were male and 79% were female. More than 60% of those assaulted were aged between 18 and 34 years.

In Australian jurisdictions consent is generally held to include free and voluntary agreement given by the complainant.

All jurisdictions, except for the Australian Capital Territory (ACT), have statutory definitions of consent. The ACT provides a list of circumstances that do not constitute consent.

The definitions of consent do not outline the form or way such agreements need to be formulated. Rather, they go to the context of consent and the ability to give consent.

However, the Queensland Court of Appeal noted:

A complainant who at or before the time of sexual penetration fails by word or action to manifest her dissent is not in law thereby taken to have consented to it. Failing to do so may, however, depending on the circumstances … provide a basis for exemption from criminal responsibility under s.24 of the Criminal Code [mistake of fact].

The UK Sexual Offences Act talks of consent being agreement by choice, and the person has the freedom and capacity to make that choice.

The United Nations Handbook for Legislation on Violence against Women states that consent requires:

the existence of ‘unequivocal and voluntary agreement’ and requiring proof by the accused of steps taken to ascertain whether the complainant/survivor was consenting.

The affirmation model of consent essentially relies on a positive agreement between the parties before sexual interaction can begin – in simple terms, a clear and unequivocal “yes”.

In the United States, the primary focus of affirmative consent is on how sexual assaults are handled in universities and colleges. California and a handful of other states, and hundreds of educational institutions, have now enacted affirmative consent laws and policies.

A person must take reasonable steps, in the circumstances, to ascertain whether the other participant affirmatively consents.

Tasmania does reference the fact that consent does not exist if the person “does not say or do anything to communicate consent”. In other words, in the absence of positive affirmation there is no consent.

The allegations against Ansari centre on misreading non-verbal cues, with the complainant stating:

You ignored clear non-verbal cues; you kept going with advances.

Ansari did stop when the complainant asked him to. The affirmative model removes any ambiguity around the issue of consent – it is either yes or no, and the model places an onus on both parties to obtain such permission.

Adopting an affirmative consent model may not necessarily remove issues of credibility at trial when there is no secondary evidence of consent (such as recordings or witnesses).

In acquaintance sexual assaults, consent becomes a central evidentiary element required to be proven. As a former senior detective, I saw these matters often reduced to a battle of credibility between the accused and the accuser. In Australia between 2010-2016, the majority of reported offences were acquaintance based. 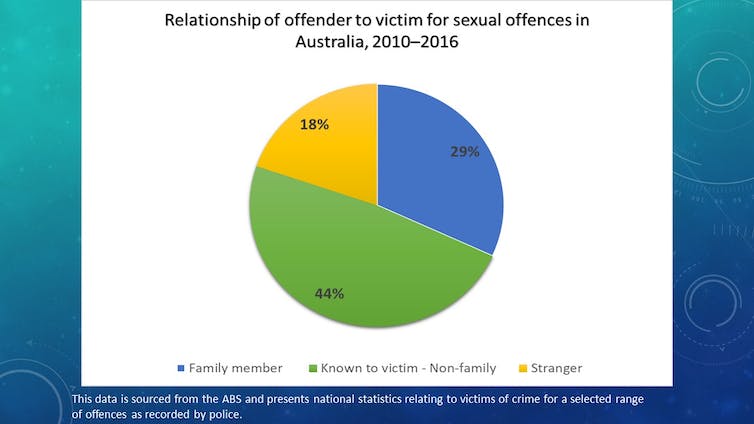 Breakdown of relationship status between victim and offender as sourced from police reports. Sourced from ABS. Author

Supporters of the laws argue it removes the onus on the victim to show resistance to the act, or the fact they said no, and addresses a culture of entitlement in sexual interactions. Requiring affirmation, it is argued, can be used to create a culture of respect.

Critics of the yes-means-yes model suggest it removes due process and impinges on the rights of the accused by changing the evidentiary onus. Some argue that, given the nature of sexual interaction, it removes the passion from such transactions.

Compounding this is the need to obtain consent for each act of sexual interaction. The premise being ask first and ask often.

While such a requirement may appear awkward, others argue it can be turned into “enthusiastic consent” where it can be entwined with foreplay and

turned into an integral part of a sexual encounter as partners banter back and forth, tease, and check in with each other on what they are (and aren’t) going to do.

When I ask my criminology students what consent in sexual assault matters means, few are able or willing to answer. Such questions are met with embarrassment and the inevitable answer is “you just know”. Of note is that my classes are overwhelming female. There are differences as to how males and females seek and interpret consent.

This highlights that not only must we focus our efforts on educating on appropriate sexual behaviours, but we must also educate those most at risk as to what levels of consent they are entitled to. As one article highlighted, we need to make consent cool.