You’ve probably read stories about new research using the gene editing technique CRISPR, also called CRISPR/Cas9. The scientific world is captivated by this revolutionary technology, since it is easier, cheaper and more efficient than previous strategies for modifying DNA.

The term CRISPR/Cas9 stands for Clustered Regularly Interspaced Short Palindromic Repeats/CRISPR associated protein 9. The names reflect important features identified during its discovery, but don’t tell us much about how it works, as they were coined before anyone understood what it was.

What does CRISPR/Cas9 do?

CRISPR/Cas9 is a system found in bacteria and involved in immune defence. Bacteria use CRISPR/Cas9 to cut up the DNA of invading bacterial viruses that might otherwise kill them.

Today we’ve adapted this molecular machinery for an entirely different purpose – to change any chosen letter(s) in an organism’s DNA code.

We might want to correct a disease-causing error that was inherited or crept into our DNA when it replicated. Or, in some cases, we may want to enhance the genetic code of crops, livestock or perhaps even people.

So do we just snip the unwanted gene out and replace it with a good one?

We first have to remember that animals and plants are composed of millions of cells, and each cell contains the same DNA. There is no point editing just one cell: we would have to edit the same gene in every single cell. We’d have to snip out millions of genes and paste in millions of new ones.

And not all cells are easy to get to – how could we reach cells buried in our bones or deep within a brain?

A better approach is to start at the beginning and edit the genome while there is only one cell – a very early embryo.

So, all we need is a giant microscope and a tiny pair of scissors. And that is basically what we use.

Cas9 is the technical name for the virus-destroying “scissors” that evolved in bacteria. The CRISPR part of the name comes from repeat DNA sequences that were part of a complex system telling the scissors which part of the DNA to cut.

Find, cut and then paste

In order to target our Cas9 scissors, we link them to an artificial guide that directs them to the matching segment of DNA. 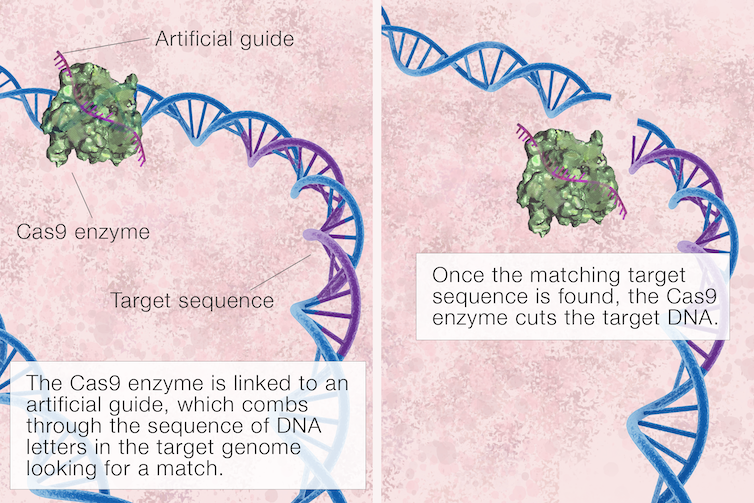 We give the scissors a copy of the DNA we’re after so they know where to cut. CC BY-ND

Remember, DNA comes in two strands, with one strand fitting alongside the other. We make a guide with a code that will line up with only one part of our 3 billion base pair long genome – it’s like a “Google” search. It’s truly possible for our guide to comb through vast amounts of genetic material to find the one section it matches exactly. Then our “scissors” can make the cut in exactly the right place.

Once the Cas9 scissors cut the DNA just where we intend, the cell will try to repair the break using any available DNA it can find. So, we also inject the new gene we want to insert. 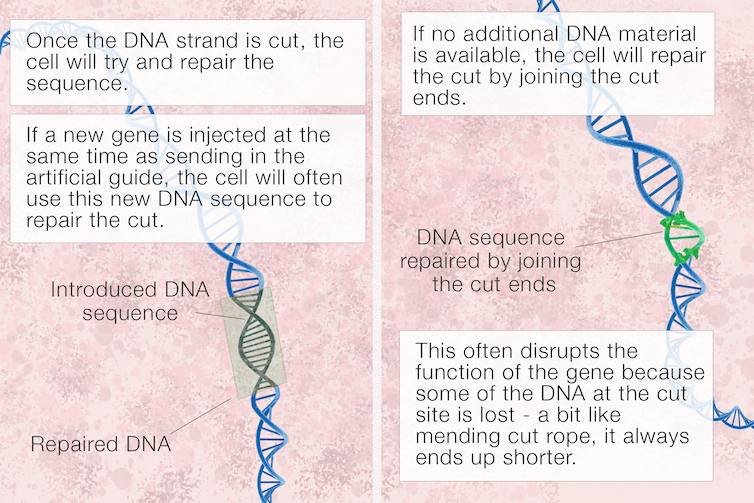 If we inject new DNA it will take the place of the DNA we have cut.

Read more: Now we can edit life itself, we need to ask how we should use such technology

You can use a microscope and a tiny needle to inject the CRISPR/Cas9 together with the guide and the donor DNA, the new gene. Or, you can punch holes in cells with electric currents and let these things just float in, use guns to shoot them in stuck-on tiny bullets, or introduce them encapsulated in bubbles of fat that fuse with the cell membrane and release their contents inside.

But how does the new gene find the right place to embed itself? Imagine you wanted to put in the last piece of a jigsaw puzzle with 3 billion pieces, and it’s inside a cell, filled with goop like a passionfruit.

What you’d do is fabricate a jigsaw piece of precisely the right shape and inject it into the passionfruit. Then it’s just a case of jiggling around until eventually the piece finds its way to the correct part of the puzzle and slots into the only place it fits.

You don’t need to be able to see the DNA in our genome through the microscope – it’s too small. And you don’t really have to jiggle either – random diffusion (called Brownian motion) will always deliver the jigsaw piece to the place where it fits in the end.

First, the guide will jiggle along and find the right place for the scissors to cut, and then the new donor DNA will similarly line up where it fits and will be permanently stitched into the DNA strand via natural DNA repair mechanisms.

Recently, though, new CRISPR editing systems have been created that don’t even require a cut through the DNA. In this case, the CRIPSR/Cas and guide system can deliver an enzyme to a particular gene and alter it, changing perhaps an A to a G or a C to a T, rather than cutting anything out or putting anything in.

What are we doing with CRISPR/Cas9?

Most experiments use mouse embryos or cells grown in petri dishes in artificial liquid designed to be like blood. Other researchers are modifying stem cells that may then be re-injected into patients to repopulate damaged organs.

Only a few labs around the world are actually working with early human embryos. This research is highly regulated and carefully watched. Others work on plant cells, as whole plants can be grown from a few cells.

As we learn more, the scope of what we can do with CRISPR/Cas9 will improve. We can do a lot, but every organism and every cell is different. What’s more, everything in the body is connected, so we must think about unexpected side effects and consider the ethics of changing genes. Most of all we, as a society, should discuss and agree what we wish to achieve.

Read more: Why we can trust scientists with the power of new gene-editing technology