More than five years after the Murray Darling Basin Plan was implemented, it’s clear that it is not delivering on its key objectives.

The Basin Plan, at its core, is about reducing the amount of water that can be extracted from its streams, rivers and aquifers. It includes an environmental water strategy to improve the conditions of the wetlands and rivers of the basin. The Productivity Commission will conduct a five-yearly inquiry into the effectiveness of the Basin Plan in 2018.

It is high time to explain what is really going on in the Basin and water recovery. For this reason we have all signed the Murray-Darling Basin Declaration to explain what has gone wrong, to call for a freeze on funding for new irrigation projects until the outcomes of water recovery has been fully and independently audited, and to call for the establishment of an independent, expert body to deliver on the key goals of the Water Act (2007).

Until the ABC’s 4 Corners program in July last year, many Australians were unaware of alleged water theft and grossly deficient compliance along the Darling River. The true situation stands in stark contrast to the official view that all was well.

Some A$6 billion has been spent on “water recovery” in the Murray-Darling Basin. Of this, A$4 billion was used to subsidise irrigation infrastructure. This water recovery and the 2012 Basin Plan have been presented as a comprehensive solution to the environmental and economic problems of the Murray-Darling. But what has this huge public expenditure actually bought us?

The basin remains in a poor state. While there have been environmental improvements at specific sites, these have not been replicated basin-wide. Indeed, the federal government’s own State of the Environment Report 2016 gives a “poor” assessment on inland water flows in the basin. It reports long-term downward trends in flows since 2011 and a widespread loss of ecosystem function. Other evidence tells the same story.

Water recovery infrastructure projects have benefited irrigators, but for many of these projects there is no scientific evidence that they have actually increased net stream flows. Flows at the Murray River mouth remain inadequate. The federal government’s objective to keep the mouth open to the sea 90% of the time will almost certainly not be achieved.

The Murray mouth remains in a dire state – dredging to keep it open is the norm rather than the exception, even without a drought.

How is it possible to spend A$6 billion on water recovery in the basin and have so little to show for it? It is now more than 11 years since the A$10 billion National Plan for Water Security was announced, seven years since the Millennium Drought ended, and the Australian government is already 70% towards achieving its water recovery goal. Surely, by now, Australian taxpayers – not to mention the river’s ecosystems – should be seeing a better return on this bold environmental investment?

We have spent much of our working lives investigating water reforms and the health of the Murray-Darling Basin. We deplore the diversion of funds for environmental recovery into irrigation upgrades – a decision that simply represents poor public policy. Much more could have been achieved for far less, as federal government data show that buying water from willing sellers is 60% cheaper than building questionable engineering works.

To make matters worse, just two months ago the Murray-Darling Basin Authority recommended to parliament that buying back of environmental flows be reduced by 22% by July 1, 2019. This is an average annual reduction that exceeds the volume of water in Sydney Harbour.

Instead, 36 water supply projects are planned to deliver this water recovery goal. Yet 25 of them fail to satisfy the Basin Plan’s own conditions of approval such as environmental risks are adequately mitigated.

Plans are also afoot to “invest” A$1.5 billion in yet more infrastructure projects that will supposedly be the equivalent of 450 billion litres per year of water by 2024. South Australia demanded this extra water before it would approve the 2012 Basin Plan. 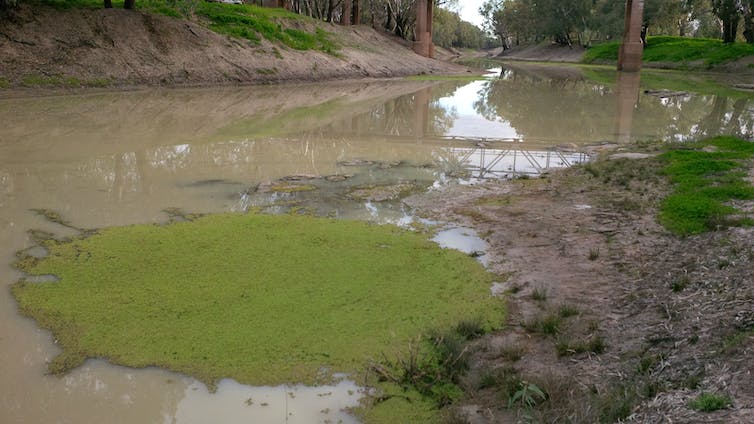 An algal bloom in the Darling River at Louth. John Williams, Author provided

Despite spending A$4 billion to reduce water losses from irrigation over the past decade, we still do not know what impact this has had on the water that previously flowed from farmers’ paddocks and returned to wetlands, rivers and aquifers. The decline in these flows might have completely offset increases in environmental flows from water rights acquired through subsidies.

It is time to call it like it is. Australia is paying the price of alleged water theft, questionable environmental infrastructure water projects, and policies that subsidise private benefits at the expense of taxpayers and sustainability.

Accountability requires transparency in reporting and monitoring. So far we have failed to redirect public money away from wasteful subsidies while the rivers suffer. This is why we have signed the Murray-Darling Declaration, to highlight our concerns and to offer solutions.

Many aspects of water reform need to change, but three steps are necessary to deliver fully on the key objectives of the Water Act 2007. These are:

There is no time to waste for the Murray-Darling Basin, its rivers, environments, traditional owners, and communities. Our declaration makes it clear what must be done. The federal and state governments must be held to account and actually deliver what is needed for the basin, before the next big drought causes irreversible damage.

This article was co-authored by Richard Davis, a former chief science adviser to the National Water Commission.