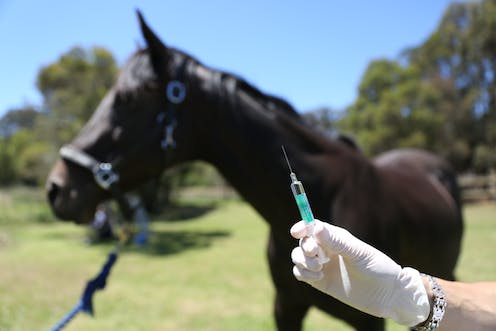 Vaccination against the deadly Hendra virus in horses does not reduce their racing performance, according to new research published in the Australian Veterinary Journal.

The research was done following concerns by some that the vaccine could impact on the performance of horses.

The new study should ease those concerns, and lead to an increased uptake of the vaccine for horses to protect them – and also protect the people who work with the horses (who are potentially at risk from the virus too).

Read more: Why horse-racing in Australia needs a social licence to operate

The Hendra virus was first identified in 1994 in a large outbreak in a thoroughbred racing stable in the Brisbane suburb of Hendra. In this outbreak, the horse trainer and 13 of his horses died, and the stable-hand became sick. Brisbane racing was cancelled for three weeks.

The Hendra virus spills over sporadically from fruit bats to horses. It has caused 60 outbreaks of disease in Queensland and in northern New South Wales as far south as Kempsey.

At last, a vaccine

A horse vaccine for Hendra was finally developed following years of research involving the CSIRO.

Read more: How we developed the Hendra virus vaccine for horses

On November 1, 2012 the Hendra virus (HeV) EquiVac vaccine for horses was made available under a special “minor or emergency use” permit due to the urgent need for its release following the large number of outbreaks in 2011. In May 2015 the vaccine was fully registered.

There is no vaccine available for people, but Queensland Health has conducted a successful early phase clinical trial of monoclonal antibody treatment for people exposed to Hendra virus.

The Hendra vaccine for horses is promoted by many authorities, including the New South Wales and Queensland governments and the Australian Veterinary Association, as the “single most effective way of reducing the risk of Hendra virus infection”.

Low uptake of the vaccine

But despite the vaccine protecting human and horse health, its uptake was low.

Our unpublished data suggest that just 26% of thoroughbred horses racing in southeastern Queensland received vaccinations between November 2012 and December 2016. Overall, only about 14% of all Australian horses have been vaccinated.

Some individuals and performance horse associations voiced their concerns about potential performance impacts caused by the vaccine during a 2016 Queensland Parliamentary inquiry. For example the Thoroughbred Breeders Queensland Association described anecdotes of alleged poor performance in some racehorses following Hendra vaccination.

In a study of 27 horse owners, some also said they were concerned and uncertain about adverse reactions as they had heard about horses’ performance decreasing, horses aborting, becoming sterile, getting severely sick, or even dying due to the vaccine.

Some people also expressed such concerns over vaccination via social and other media.

In contrast, the Australian Veterinary Association and a well known racehorse trainer said Hendra vaccination did not impact performance of top racehorses. The Queensland Horse Council submission to the inquiry also fully supported the vaccine.

As a result of lacking objective information about any effect of vaccination on racing performance, the Queensland Racing Integrity Commission funded the University of Sydney’s Equine Infectious Disease Research Group to investigate the issue last year.

The extensive study examined performance data of 1,154 thoroughbreds over 12,066 race starts in the three months before and after receiving Hendra vaccination.

Each horse acted as its own control. Horses were selected if they had raced at one of the six major southeastern Queensland racetracks between July 2012 and December 2016.

The study also compared the margin of the horse to the winner and whether a horse won the race, placed first to third or won any prize money.

The results are in

None of the analyses found any statistically significant difference in horse performance before and after vaccination.

The large number of horses and race starts studied allowed us to account for many factors that can affect horse performance, such as distance and track conditions. It provides very high confidence that performance is unaffected by vaccination.

It’s hoped the study’s findings will now increase the uptake of the Hendra vaccine. This would lead to a higher number of horses protected from this deadly disease. It would also result in prompter treatment of sick horses and improved horse welfare.

But there are other reasons for the poor uptake of the Hendra vaccination that need to be addressed.

Costs can be a factor as each vaccination costs between A$80 and A$120 to be administered by a veterinarian.

Read more: Why bats don't get get sick from the deadly diseases they carry

Other barriers for vaccination uptake include a perceived low infection risk, fear of adverse reactions and opposition to regulations that mandate vaccination.

It is important to remember that Hendra virus disease is also a human health issue.

So the results of our study should remove the barrier to vaccination uptake that was based on misinformation around racing performance impacts. Horse trainers and owners can be confident that Hendra vaccination can prevent infection in horses, themselves and staff without adversely affecting their horse’s performance level.