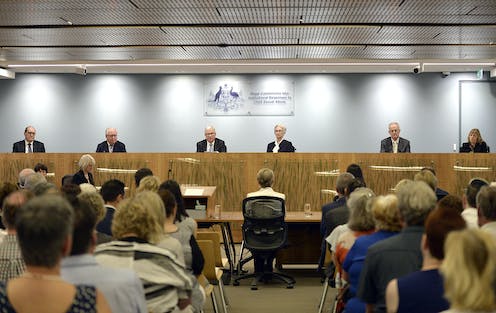 The recently completed Royal Commission into Institutional Responses to Child Sexual Abuse is recognised as a world exemplar in its mode and scope.

However, there are considerable political and policy hurdles facing the federal government if it is to lead the states and territories and move Australia toward a national redress scheme for victims of child sexual abuse, as recommended by the royal commission.

Establishing a national scheme is difficult because the Commonwealth alone cannot legislate it. Rather, states must refer powers to the Commonwealth, which then permits their non-government institutions (like churches, charities and secular organisations) to opt in.

A bill currently before parliament is a first step. Passage will affect Commonwealth survivors and permit the territories and associated non-government institutions to opt in. The Commonwealth has 1,000 of a national total of 60,000 eligible survivors.

Despite many meetings over the past two years, the federal government has not been able to persuade the states to refer powers and opt in. This significant hurdle can be traced to who will pay and how much, scheme details, and state-federal politics.

One major concern with the current bill is that core elements of the redress scheme – among them who will be eligible and how the monetary payment will be determined – are not in the legislation. Rather, they are in delegated legislation (the rules, not regulations), which gives the scheme operator (the social service minister) considerable discretion in implementing the legislation.

The effect of using the rules is to bypass detailed parliamentary debate on the bill’s provisions. The then social services minister, Christian Porter, explained that using rules rather than regulations or legislation provides “flexibility” in implementing the scheme, “prompt responses … to unforeseen issues”, and an ability to adapt and modify the scheme in a timely manner.

This position is understandable in light of many questions that will arise during the scheme’s implementation. But a balance will need to be struck between parliamentary oversight and operator flexibility.

The minister has broad powers in the rules to decide who is eligible. Porter has said those convicted of a sexual offence or sentenced to imprisonment for five years or more would be ineligible. The reason given was to ensure integrity and public confidence in the scheme.

Read more: When it comes to redress for child sexual abuse, all victims should be equal

Another area of contention, and in the rules, is the minister’s power to “declare a method” for deciding the monetary payment, known as the assessment matrix.

Porter’s rationale for not having the matrix in legislation is “to prevent fraudulent claims”, which might result if the method or guidelines were published. However, what’s in the rules will be publicly accessible.

Sufficiently robust information, but of a general nature, on what is to be assessed and how it will be assessed must be publicly available so that claimants, legal advisors and support staff, and members of the public are informed. More precise guidance and detail for decision-makers to calculate a monetary payment can be in administrative guidelines.

What do survivors and advocates want?

I carried out 16 interviews with well-known public survivors and advocates to get their views on a national redress scheme. Most were interviewed in the months before the bill was tabled. Several major themes emerged.

First, there is strong endorsement for a national redress scheme, with all government and non-government institutions “coming to the table”. It should be “embraced by states and territories, supported by the institutions” to provide “uniformity and equity”. It “shouldn’t be a question of where you live”.

Despite this, concern was expressed that it may not be national. One interviewee said:

In the current political climate, there’s absolutely no way the Labor states are going to refer powers. [They] can now sniff the breeze and realise that nationally [the Coalition] is in trouble … The state premiers are coming up for re-election. There’s no way they’re going to surrender powers. They’re going to sit this out.

The most we can hope for is some sort of flawed partial national scheme.

The political questions are: who is going to pay, is there support, and where is the momentum and media attention? Two interviewees said:

It’s coming down to the money and who will budge first: how much money the federal government needs to put in and how much the state governments need to put in.

There are no votes in this scheme. There are just no votes … There are no champions beyond those intimately involved. It’s been very difficult for these past five years to keep momentum.

Some states may opt-in to the Commonwealth scheme, but others may decide to legislate their own. Other states may not opt-in or delay a decision. Some non-government organisations may continue to run their own schemes. This fragmentation will create further uncertainty – and one result is increasing civil litigation.

All care-leavers and their advocates underscored their concern with the scheme’s sole focus on sexual abuse, but so too did several advocating for clergy abuse survivors or service groups with a mixed clientele. There is more general interest, then, to include physical and emotional abuse in the redress scheme.

Those interviewed after the minister’s announcement of exclusions based on survivors’ criminal history were against the idea.

Another theme to emerge was the human costs of not meeting or poorly managing survivors’ expectations. For example:

Many said redress is more than a monetary payment: a payment can “help people get back on their feet”, but it also means acknowledgement, recognition and validation of survivors.

Redress requires attention to how a scheme is implemented. Practices should follow what the commission did when working with survivors, which means sufficient funding for legal and support services. Financial advice, if it is sought by survivors, can ensure that payments are used wisely.

Other redress elements should be considered, such as educational scholarships, access to medical and dental benefits, housing in lieu of a monetary payment, and collective modes of redress like a national memorial and a permanent museum collection on orphanages.

Interviewees argued that government and non-government institutions must be held accountable. They spoke about accountability in two ways:

Interviewees also wanted to know more about scheme elements and stressed the need for a public education campaign. One said:

Any scheme has got to be sold not only to survivors, but also the Australian public. Public support is very important … I would like to see a lot more public awareness … The taxpayer will be contributing, and if you [want] them supporting it and behind it, they’ve got to understand how it’s operating and be on board.

Another believed there should:

… have been some public process of informing people about the principles. But [there’s been] nothing, just nothing for the public.

Participants raised many questions about the redress scheme’s elements, how it would operate, and its relationship to civil litigation. An identified problem is that too little detail about the scheme and its principles has been readily available to survivors, advocacy groups, and the public. The federal government needs to be more proactive in this respect.

Many were optimistic when the royal commission released the proposed redress scheme in September 2015. The mood today is more one of pessimism and uncertainty because it has taken a long time to see progress.

Despite this, the message that survivors and advocates want to send to parliament, the minister, all the states and territories and non-government institutions is to establish a truly national scheme:

… as soon as possible … there are plenty of people who are suffering, and the longer we wait, the less support there will be.

The nation has been patient. It’s time to end the political games and fulfil the mandate of the royal commission.