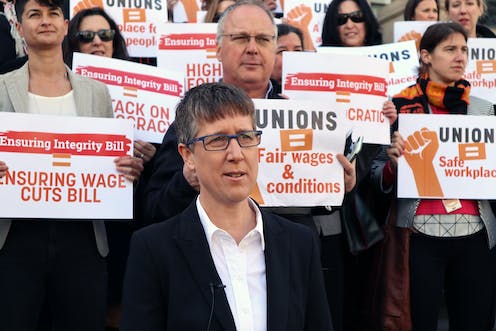 This year has begun with an intensification of the debate about wage stagnation and wage inequality in Australia.

Research papers published this year have linked the stalling of wage increases to drastically reduced levels of industrial action (and therefore unions’ collective bargaining power), and highlighted the current system of workplace regulation’s focus on outdated notions of work and the workplace.

Read more: Vital Signs: jobs may be increasing but the real test is whether we get a pay rise this year

The Labor Party’s national president, Mark Butler, recently urged the labour movement “to have a no-holds-barred debate about the place of unions in Australia”. He pointed to the problems unions faced in terms of employer hostility and unhelpful laws, but also argued:

Most people still imagine union organising against a backdrop of relatively large workplaces with a stable workforce – traditional factory organising … [However a] modern workplace is far more likely to be small and difficult to access, with a workforce that has high levels of turnover.

Unions have to persuade people of the wisdom of having a collective voice in the workplace, and find a new version of solidarity for the digital age.

Sally McManus has been secretary of the Australian Council of Trade Unions (ACTU) for just under a year. In that time, she has proven effective at elevating the debate over workplace reform. The union movement’s mantra – “the rules are broken”, “we need to #changetherules” – is biting in the community.

McManus recently effectively called time on the 25-year process of enterprise bargaining. She argued unions are confronted with “a labyrinth of regulations”, and workers now have “little to trade off”.

The Fair Work Act is a legacy of the last Labor government; it’s been the subject of minimal change by the Coalition to date.

Unions had significant input into drafting the act when Julia Gillard was workplace relations minister in 2007-08. They ensured it included various mechanisms to support collective bargaining, in a shift from the individualised focus of the WorkChoices era.

However, in the decade since then, employers have found various ways to side-step many of the Fair Work Act’s requirements. And other union or employee rights have been read down by the courts and the Fair Work Commission.

Clearly, there are changes to the law that would, as McManus argues, help unions in their efforts to organise and represent workers. These include:

Labor has already committed to implement many elements of the union agenda if it wins the next election.

But even with the most favourable laws, unions will still need to confront the reality of a dramatic transformation in the world of work: automation, the expanding “gig economy”, and what US academic David Weil calls the “fissuring” of work – where business functions are split off to new entities that are forced to engage in intense competition, thus driving down labour costs.

The workplaces and communities in which we organised politically and industrially have disappeared underneath us … Unions have to transform to catch up to the world as it is.

These developments, combined with the disinclination of young workers to join unions, mean new forms of engagement have to be found outside the conventional notion of the workplace. Unions must connect with people in their communities and speak to them using technology they are familiar with.

Some Australian unions are taking on this challenge. They are attempting to organise workers in their homes, places of religious observance, and other focal points for community activity. For example:

However, not all union leaders are embracing these kinds of innovation. They may be at risk of placing too much faith in the capacity of legal changes to deliver a revival in membership numbers.

Given record-low wage increases and widespread exploitation of vulnerable workers, the value proposition of a collective voice in the workplace has rarely been stronger.