South Korean President Moon Jae-in wants to use his country’s hosting of the Winter Olympics in Pyeongchang to renew the inter-Korean relations that have become strained over the past ten years under two conservative governments. There are calls for all parties to maintain the peaceful momentum beyond the Games.

North Korea sending multiple delegations to the Olympics is also welcome, especially after its series of military provocations in 2017. But the mistrust between the two nations is so deep that there are more sceptics than enthusiasts as the Games begin.

A backlash to North Korea’s involvement

Several joint events between the two Koreas will take place in Pyeongchang. Among these are the two teams marching together at the opening ceremony. This is expected to be a highlight. 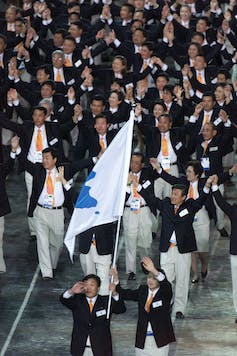 Athletes from the two Koreas marched under the unified Korean flag at the Sydney Olympics. Reuters/Mike Blake

I remember the teary moments when the North and South Korean athletes entered the stadium together at the 2000 Sydney Olympics, bearing the big blue unified Korean flag. It was as if the two Koreas had finally ended five decades of conflict and hatred after the 1953 armistice.

The overwhelming emotion was felt not only among Koreans, but also the international audience tuned into the ceremony.

In the same year, the two Koreas’ leaders – South Korea’s Kim Dae-jung and the north’s Kim Jong-il – met for the first time.

Eighteen years on, the mood has totally changed. While Moon’s domestic supporters welcome the government’s efforts to bring about peace through sport, critics are mocking the event as the “Pyongyang Olympics”. They believe North Korea is deciding the terms of their participation, and that it is manipulating South Korea.

Conservative newspaper The Chosun Ilbo has reported the South Korean government is censoring speeches by Thae Yong-ho, the highest-ranking North Korean refugee living in Seoul – an allegation that has been denied.

Others have alleged the Moon administration is silencing pessimism about the prospect of improved inter-Korean relations after the Olympics.

But, contrary to the critics’ claim on media censorship, the open criticism and pessimism is in itself proof of a free media. South Korea is a democracy – and that democracy was only won back last year after peaceful candlelight demonstrations helped lead to the ouster of then-president Park Geun-hye, who is now in jail awaiting trial on corruption charges. 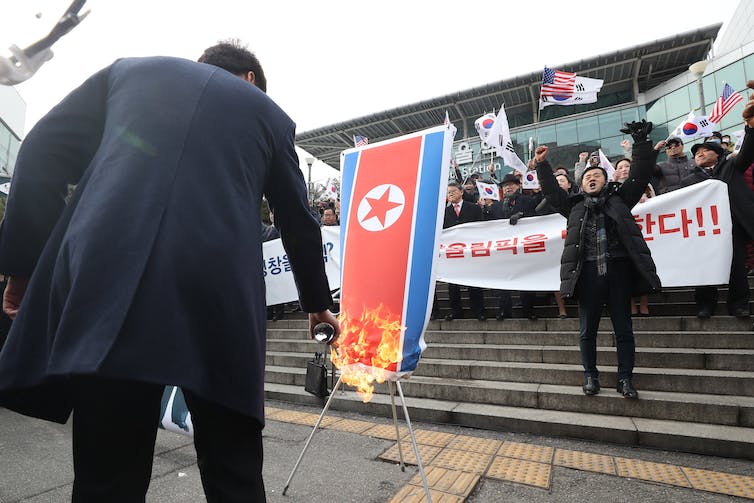 What’s being missed is the considerable amount of support from South Koreans.

I arrived in Seoul on the evening of February 1, when the North Korean athletes were arriving at Yangyang Airport near Pyeongchang. I’ve spoken to street food vendors, shop owners, and young workers about how they feel about North Korea’s participation in the Olympics, and all said it was welcome news.

The 50-year-old Asiana pilot who flew South Korean athletes to a North Korean ski resort said it was:

… personally an overwhelming experience but also a good opportunity for the country and the nation. Before we talk about unification, we need to do exchanges first so that we overcome our differences. I wish there will be more inter-Korean exchanges and we can travel to each other’s side freely.

The role of women in improving inter-Korean relations is also noticeable. The decision to form a joint women’s ice hockey team may be seen as a government intervention, but it is also a rare opportunity for North and South Korean athletes to try working together as a team. Korean women have shown a great deal of pragmatism in difficult times.

I am in Pyeongchang for the Games. I welcome the North Korean athletes and delegation’s participation at the Olympics and am looking forward to their performance. It’s the North Korean people who need to be engaged with whenever an opportunity rises, and the regime that should be punished for bad behaviour.