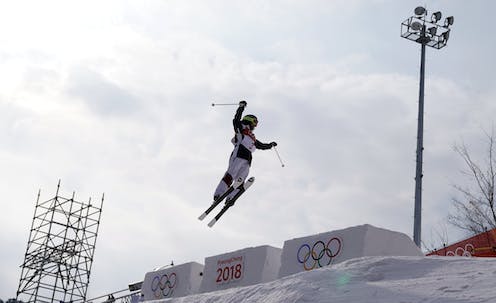 On Monday, Matt Graham won Australia’s first medal – a silver – at the Pyeongchang Winter Olympics in the freestyle moguls.

Graham’s second placing is the third time an Australian has won a medal in the event at a Winter Olympics. Dale Begg-Smith – who was also coached by Graham’s mentor, Steve Descovich – won gold at the 2006 Turin Olympics and silver at the 2010 Vancouver Olympics.

What is mogul skiing?

There have been official mogul races since 1971. The International Ski Federation’s handbook stipulates that a mogul competition:

… shall consist of one run of free skiing on a steep, heavily moguled course, stressing technical turns, aerial manoeuvres and speed.

What makes the mogul discipline distinctive is that it is both a judged event and a timed event.

Athletes are given a score out of 100 for their overall time (20 points), and their technical ability in turning manoeuvres (60 points) and aerial manoeuvres (20 points). In the evaluation of turns, five judges determine “rhythmic changes in direction of travel”. Two judges evaluate the form and difficulty of a mogul skier’s aerial manoeuvres.

Moguls skiers face several physical challenges in their discipline. They ski, at speed, downhill on a steep course and have to absorb the shock to their bodies of numerous artificially created undulations – known as moguls.

An Olympic course has:

… a slope, with an average tilt of 28 degrees, a difference in elevation of 110 metres, a course length of 250 metres, and a minimum course width of 18 metres. And the middle portion of the course has two jump sections.

In training, athletes must grow accustomed to the forces they will experience at speed, and prepare them for two landings on a steep slope while attempting elevated aerial manoeuvres.

In Pyeongchang, athletes also had to deal with extremely low temperatures that changed the texture of the skiing surface.

Read more: Winter Olympics: how athletes adapt to competing in the bitter cold

The decision to take part in mogul skiing requires athletes to develop their mental skills to deal with the volume of training required, the precision of their technical skills, and their ability to tolerate low temperatures on a snow surface that varies every time they ski.

As with all sports, athletes have to consider their exposure to injury – particularly to their lower limbs.

A 2010 study of freestyle skiers reported:

… the injury rate among World Cup athletes in freestyle skiing is high, especially for severe injuries. The knee is the most commonly injured body part, also dominated by severe injuries.

The role of coaching

Australia has both a head coach (Desovich) and a jump coach (Jerry Grossi). Both work with athletes in a daily training environment that takes them all over the world. Graham has competed in world events since 2010; he was a finalist at the 2014 Sochi Olympics.

His silver medal at Pyeongchang is the culmination of support from his family and friends, years of training, and the insights of experienced coaches.