Nine out of ten people in Western Australian youth detention are severely impaired in at least one area of brain function such as memory, language, attention, and executive function (planning and understanding consequences). Such deficits would strongly impact on their ability to conform with legal instructions, and with other aspects of the justice system such as being interviewed in court.

Our new research, conducted in WA’s only detention centre and published today in the journal BMJ Open, also found one in three of the young people assessed had fetal alcohol spectrum disorder (FASD). This is a lifelong and severe disorder of brain development that occurs as a result of exposure to alcohol in the womb. This is the highest known rate of FASD among any population involved in the justice system worldwide.

While we know damage to the brain occurs from prenatal exposure to alcohol with FASD, the causes of other impairments responsible for the high rate of functional deficits we found are complex. They can include accidents, infection and nutritional problems.

Most impairments had never been recognised or managed appropriately by any of the agencies these young people had previously been involved with – including health, education and child protection services. We recommend every individual be comprehensively assessed at first contact with the justice system, and provided with a management plan for effective intervention.

Who are the young people in detention?

Adaptive function is difficult to assess in detention settings, so the levels reported here are an underestimate. 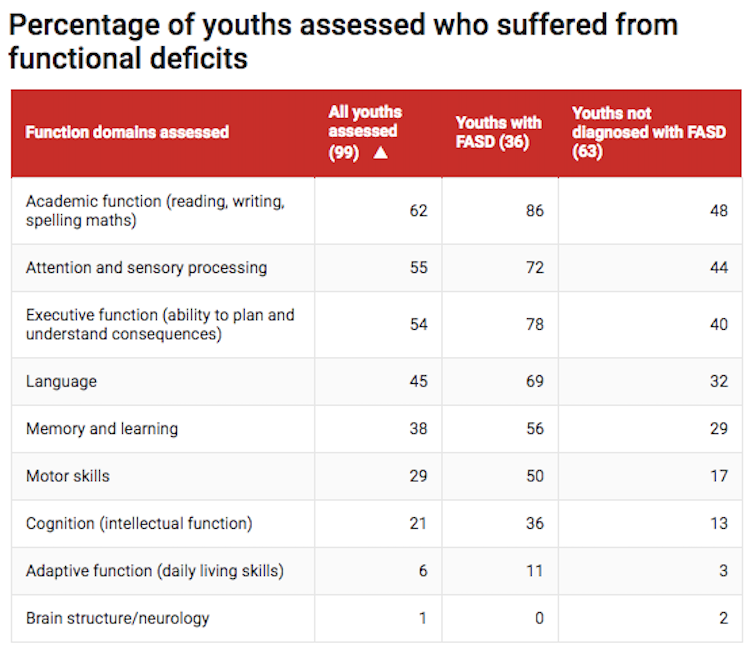 Telethon Kids Institute The assessments were conducted by a paediatrician, neuropsychologist, speech pathologist and occupational therapist. A research officer also collected background health, education and well-being information from multiple sources. We found, regardless of whether the young person had FASD, 89% were severely impaired in at least one area of functioning. Some 65% were impaired in three or more areas. While the majority of the participants in the study (74%) were Aboriginal, the impairments were found across all young people. Many participants displayed problems with remembering and recalling information, such as struggling to remember instructions. Others had difficulty understanding what was being said to them and being able to express themselves verbally, focusing their attention and being able to switch focus between tasks when required. Impairments may come across in behaviours with young people appearing wilfully naughty, defiant, or lazy, when in reality they may been be struggling to remember, understand or comprehend what is required of them. Many of the young people had a history of trauma, early school disengagement and early substance misuse. It is likely the extensive amount of impairment, along with poor mental and physical health, histories of trauma, and the lack of adequate processes in place to support them, is contributing significantly to the high rates of youth crime and the increase in serious incidents in Australian detention centres. The end of the line Juvenile detention is currently the end of the line for the most vulnerable, injured and disadvantaged young people who may have repeatedly slipped through cracks in the systems responsible for their welfare. For instance, of the 36 young people we diagnosed as having FASD, only two had previously been diagnosed. These young people may have avoided the justice system altogether if such issues had been identified early and appropriate support put in place. We recommend each young person be assessed upon entry into the justice system, and preferably much earlier. Our study’s assessment process gave us an understanding of each young person’s cognitive strengths and difficulties, which was useful for the youths, their families and those working with them. If more programs and services were based around the strengths of these young people, this may lead to better education and employment opportunities and a more hopeful future. Read more: Young offenders must be screened for fetal alcohol spectrum disorders before sentencing We also found juvenile justice staff, at least in WA, are enthusiastic for research-informed training to provide appropriate support for young people in their care. Equipping all staff who work with these vulnerable young people (be it in detention, community justice, education, child protection or health settings) with knowledge, resources and support is critical for the well-being of everyone involved. We also need to take a national approach to this problem, sharing our knowledge of what works, so government and researchers can move forward together to inform best practice nationwide.