With tensions in the Korean peninsula seemingly never-ending, the possibility of conflict erupting in East Asia is keeping everyone on edge. North Korea’s continuous launching of missile and nuclear tests has been met with fresh sanctions from the UN Security Council – an action Pyongyang considers an “act of war”.

In the event of conflict breaking out, analysts are expecting a large human toll. With a 1,670 kilometre shared border with North Korea, both China and South Korea would undoubtedly witness a mass refugee spillover.

To avoid another refugee “crisis” that would take the world, the humanitarian aid system and neighbouring countries by surprise, both China and South Korea need to be prepared. To do so, they will need to learn from other refugee emergencies by making three key policy decisions.

As party to the 1951 Geneva Convention on the Status of Refugees, China and South Korea are bound by the principle of non-refoulement, which requires states not to return refugees to countries where they face potential threat.

Since this principle is also enshrined in customary international law, the international community will be expecting both countries to admit those seeking refuge to their territories.

Ideally, people fleeing persecution should be granted “refugee” status, as envisaged by the 1951 Convention. However, in the case of a mass influx situation, governements’ capacities to process refugee claims individually are often overwhelmed. Therefore, some countries have opted for a temporary protection regime instead.

Since 2011, for instance, the Turkish government has been providing asylum to Syrian nationals under a temporary protection scheme, which provides them with a set of rights, including the right to protection from forcible return, until a solution to their situation is reached. 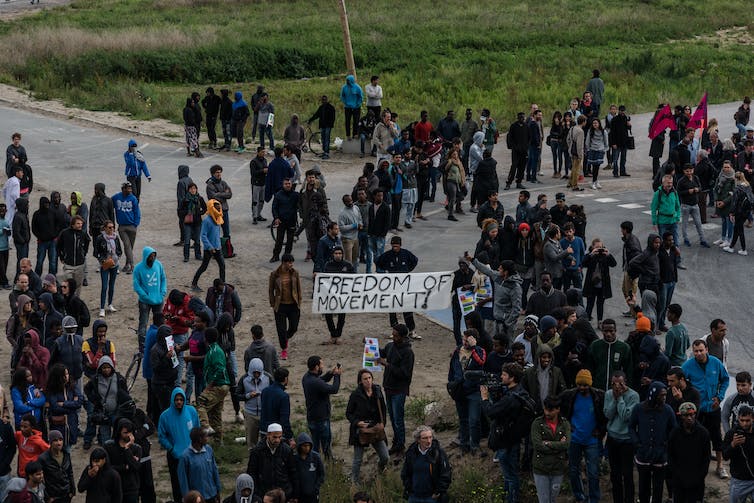 A refugee influx can turn into a crisis if countries aren’t prepared. Samuel Boivin/AAP

To benefit from this regulatory scheme, Syrian nationals must register themselves with the authorities within a designated time, and are issued identity cards, without which they cannot access vital services such as health care.

Temporary protection then ends with return to Syria when conditions are deemed safe, or resettlement to a third country.

This scheme may prove useful in the context of a North Korean refugee spillover.

Read more: Why a first strike option on North Korea is a very bad idea

2. Allowing them choice of settlement

Over the years, practices have varied between housing refugees in camps and allowing them to self-settle in urban areas.

Both practices have their pros and cons. While camps make the provision of aid logistically easier, allowing refugees to self-settle reduces their sense of imprisonment and idleness, which can have negative social manifestations such as gender-based violence.

The best approach would be something in the middle. China and South Korea can emulate the Jordanian model, where Syrian refugees were given a choice to self-settle or stay in one of the designated refugee camps.

Since women and children make up the majority of refugee movements, it makes sense to provide encampment for the most vulnerable, while avoiding the situation where camps turn into cities themselves as a conflict becomes protracted.

3. Including them in the formal economy

While needs in the early emergency phase mainly revolve around relief assistance, as time goes by refugees’ needs change. When refugees do not have a source of livelihood, they resort to negative coping mechanisms, such as child labour and street begging.

China and South Korea can get inspiration from the Ugandan model if a refugee influx occurs. In this model, refugees work, pay taxes, and use their entrepreneurial skills to boost the formal economy.

Engaging refugees in the labour market avoids their otherwise inevitable inclusion in the informal economy, reduces their reliance on assistance, and avoids trapping them in a vicious cycle of dependency.

Regulating the refugee influx, rather than restricting or barring it, is not only the humane thing to do, but it is also smart management. Refugees can be a power to harness if they are considered a source of added value, rather than a threat.

Allowing refugees in, while regulating the influx, can help China and South Korea uphold their obligations while simultaneously staying in control of the situation.

And as with every refugee crisis that came before it, and every one that will sadly but inevitably follow, there can be no greater effort than the effort made in reaching a political resolution to the underlying conflict in the Korean peninsula. Diplomacy between countries can help the world avoid another tragic and protracted humanitarian crisis.