Parents are always on the lookout for ways to entertain their kids, whether it’s for birthday parties, school holidays, or a way to escape the house on a rainy weekend. We also like to encourage physical activity, to ward off the obesity risks from too much couch time and junk food.

Indoor trampoline parks have rapidly become a popular solution. The first park opened in 2012 and there are now around 80 across the country.

Attendance has soared, and so too has the number of injuries, as our research – published today in the Australian and New Zealand Journal of Public Health – shows. Some injuries are minor but others have resulted in permanent disability.

Read more: How to prevent injury from sport and exercise

While some indoor trampoline parks operate to a high safety standard, others don’t, and there’s nothing compelling them to lift their game. Voluntary Australian safety standards are currently in draft form and under review, but to make a real difference to kids’ safety these standards must be mandatory.

Emergency departments across Victoria, Queensland and Western Australia saw almost 500 injures from indoor trampoline parks between 2012 and 2016. And that’s an underestimate; our research used data from the state’s injury surveillance databases, missing those treated in private hospitals or by their GP.

Dislocations, sprains and strains were most common, followed by fractures. Some 15% of children presenting to hospital were admitted due the serious nature of their injuries.

More than half of all injuries were in children aged 10 to 14 years, with girls just as likely to be injured as boys. 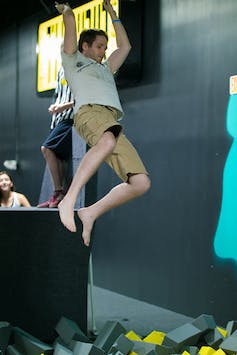 There are no mandatory safety standards for foam pits. Nan Palmero, CC BY

The biggest problem was when multiple users were on one trampoline, attempting to do somersaults or flips, or landing awkwardly.

Another key problem is when users jump into the foam landing pit, which is not mandated to ensure sufficient depth, padding and impact reduction. It would be possible to land on a concrete block on your head, for example.

Trampoline park operators ask entrants to sign a risk warning and waiver, accepting the “risk of personal injury and death”, prior to entry. While this risk might be low, in rare cases users have sustained permanent and lifelong disability. The case of one user sustaining spinal cord damage resulting in lifelong quadriplegia, for example, is now before the courts.

This trend has been also seen internationally, where a previously fit and healthy 30-year-old man attempted a flip and landed awkwardly in a foam pit. The pit was only half the recommended depth, and the injury cost the man his life.

Entrepreneurs have cashed in on the rapid growth of trampoline park venues across Australia, with one generating A$32 million of revenue in the first two years.

The problem is that there is currently no Australian standard for indoor trampoline parks – voluntary or mandatory. That means anyone can set up a profitable park by importing cheap trampolines, squeezing as many as they can into a facility, and scrimping on daily safety checks and maintenance.

Regulators have drafted a voluntary set of safety standards – minimum safety thresholds – to reduce the risk of serious traumatic injuries at indoor trampoline parks. These are currently under review, pending publication later this year. But these are voluntary; park operators can choose to follow them or not.

Australian standards for indoor trampoline parks would ensure operators are consistently setting up and running safe and well-maintained venues. Recommendations to make these venues safer include:

Until park operators are mandated to adhere to safety standards, patrons have limited legal recourse in cases where trampoline parks do not comply. 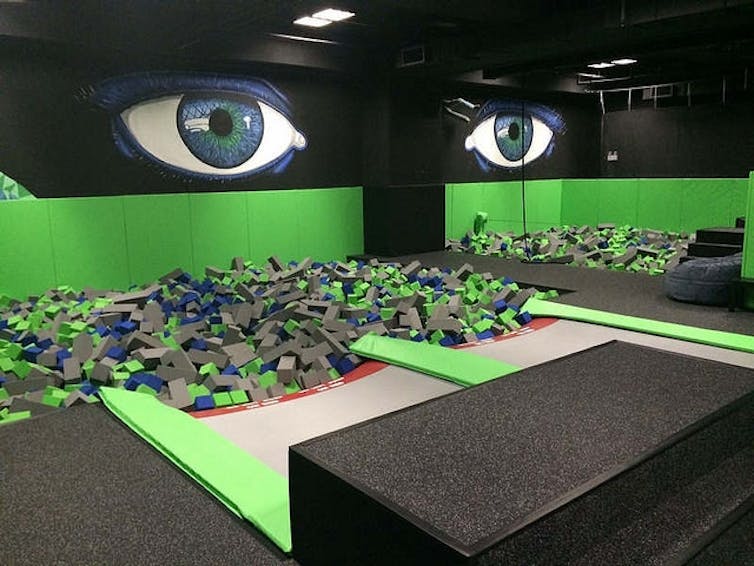 Some indoor trampoline parks are better than others. Pictures I Like, CC BY

So what can you do?

Well, you can use your own or a friend’s outdoor trampoline. While there are, of course, risks for children jumping on backyard trampolines, Australian standards apply to the import, enclosure systems, structural integrity, and entrapment risks to protect children falling off or being injured on elevated trampolines. The ACCC provides a good safety checklist for choosing a backyard trampoline.

If you are going to send your kids to an indoor trampoline park, opt for one with Australian Trampoline Park Association accreditation. This is a code of practice to which ATPA members must adhere, and which covers around one-third of parks. While we wait for mandatory regulation, indoor trampoline park users can vote with their feet and choose to jump at centres that take safety seriously.