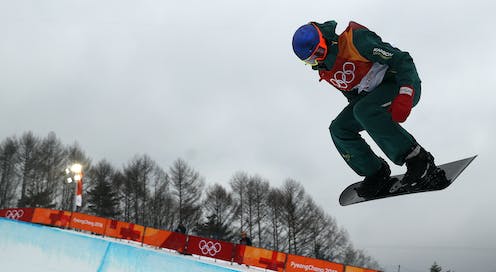 James’ medal adds to those won by fellow Australian Torah Bright (gold at the 2010 Vancouver Olympics and silver at Sochi in 2014) in the women’s snowboard halfpipe event.

What is snowboard halfpipe?

The snowboard halfpipe made its debut at the 1998 Nagano Olympics. The event takes place on a trough-like feature made of snow, built on a shaped earth base. The Olympic halfpipe is sloped at approximately 17-18°, and is between 150-170 metres long, 19-22m wide, and 6.7m high.

The halfpipe event consists of three runs lasting around 20-30 seconds, and involves between six and eight “hits” of the pipe. A “hit” is an aerial trick (jump, rotation and twist) off the top of the pipe.

Six judges score a competitor’s run based on each hit’s height, rotation, technique and degree of difficulty, with a score given out of 100. The highest and lowest scores are removed, and the final score is the average of the four remaining scores.

The best score of the three runs is recorded; the highest scores determine the medals.

Judges deduct points for errors in a run based on the following criteria:

Highlights of the men’s snowboard halfpipe final from Pyeongchang.

The nature of snowboard halfpipe means most competitors risk serious injury – and possible death – throughout their career.

The most common injuries are to the lower arm/wrist, spine, and knee. As a result, current training practices focus heavily on giving athletes the physical tools to prevent these injuries.

Specifically, many programs target jumping/landing force, as this is the common factor of injury occurrence for snowboard halfpipe athletes. Training for “crash robustness” requires athletes to build joint strength and soft-tissue support in muscles and ligaments across the entire body.

Core strength to support and tolerate spinal loads during rotations, jumps and landings is also crucial in avoiding spinal injuries.

A horrific crash in the men’s snowboard halfpipe final from Pyeongchang.

Snowboard halfpipe is an explosive, skill-based sport. While building “crash robustness” is integral, these athletes need to train to perform. They may seem laid-back and relaxed, but they are subjected to high physical load and fatigue induced by training and competition.

An average training day for halfpipe may consist of between ten and 12 runs (each lasting 20-30 seconds), plus hikes to the top of the pipe. This equates between two and four hours of training each day. Managing sub-zero temperatures and the effects of altitude on physical performance is also a concern.

A large majority of off-snow training focuses on sport-specific skill development, such as building co-ordination and the smoothness of trick execution. Athletes and coaches use a “gymnastic approach” to off-snow training – via trampolines, foam pits, and diving platforms/pools – to practice aerial skills in a safe landing environment.

So, behind his cool exterior, James has worked as hard as any other elite athlete on all aspects of his training to avoid injury and increase performance. Put together, this enabled him to stand on the podium to receive his bronze medal.