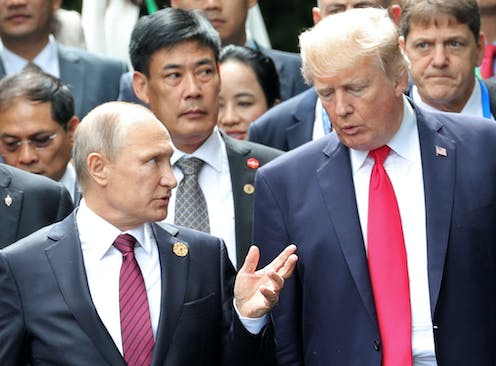 Russia keeps posing a massive intelligence puzzle to the West: it is never as weak as we may want it to be, nor is it as strong as we fear it may be.

So, how can we classify Russia as an international power? It is not the Soviet Union reincarnated, so it is not a reborn counterpoint to US global supremacy. Nor does it intend to be. But it remains a major strategic spoiler of the US’ ambitions to retain its rules-based global order.

Moscow is trying to strengthen its relationship with like-minded major powers. China is one of Russia’s comrades-in-arms, although not a formal ally. China and Russia are not forming any sort of anti-Western/anti-US alliance; both great powers have their own national agendas.

Over the past ten years, Russia and China have developed very close military ties, but their economic relationship remains uneven and quite low on the common strategic agenda. They are de facto engaged in soft competition across Central Asia and the Asia-Pacific.

But their intention to change the status quo in support of their ambitions aligns with their security and strategic agendas, at least for now. Just like China, Russia seeks to maximise its strategic autonomy by aggressively fending off any perceived challenges to its national interests or sovereignty.

The time cannot be better. US President Donald Trump keeps puzzling allies by reversing major political decisions of previous administrations, while prioritising an inward-looking approach to running his country. And he is no match for Vladimir Putin in terms of experience, charisma, domestic popularity and global influence.

Read more: Stakes are high as Turkey, Russia and the US tussle over the future of Syria

Try a simple experiment: search any publication about Russia published by the Australian media and try to find an article on anything Russia-related that does not have a reference to Putin. We see in Putin a manifestation of Russia’s ambitions; its political, military, economic and even sport successes and failures; defence of traditional values and criticisms of the Western way of life.

Putin wants for Russia a “place under the sun”: that is, dominance over the immediate neighbourhood combined with Russia’s recognised right to have interests in other parts of the world. The big question is: does modern Russia have what it takes to be a global superpower? The reality is there is no definitive answer to that.

On the one hand, Russia possesses key elements of a superpower: it is self-sufficient when it comes to natural resources and it is an energy superpower; it is a space power with a developed sovereign capability; it has a world-class scientific capability; it is the second-biggest military superpower in the world behind the US. Finally, it has global ambitions and a global agenda.

On the other hand, like China, Russia does not have a civilisational agenda – a competitive political model that could be an alternative to Western liberalism based on a free-market economy. After all, the Cold War was a clash of competitive socioeconomic systems supported by geopolitical and military-strategic competition. There is none of that today.

Second, Russia does not have the economic might of China and its intertwined economic interaction with the US. The Russian economy has suffered a great deal from the tight sanctions regime implemented after the Ukraine crisis, and is only beginning now to show signs of recovery.

That is not to say Russia has lost the economic means to support itself and its global ambitions. Over the past two years, it has achieved a major breakthrough in exporting grain and other agricultural produce, making it one of the top-three foreign currency earners. In 2017 alone, Russia earned some US$20.5 billion by exporting agricultural produce.

Read more: Where will the global political hotspots be in 2018? (Spoiler alert: it's not all about Donald Trump)

The Russian defence sector plays its traditional role of both earning much-needed cash and furthering Russia’s geopolitical agenda. In 2017, Russian arms exports were worth US$17 billion, while the total portfolio of foreign orders of Russian armaments and military equipment is about US$45 billion, effectively retaining the number-two position in global arms sales.

Still, Russia has no means of global economic expansionism. It is desperately seeking new economic opportunities and partnerships with other countries that do not want all the power focused on the US. This gives China a strategic lead because of its diversified extensive economic partnerships with the US, Europe and Asia.

Yet it would be premature to crown China as the sole superpower rival to the US. Unlike Russia, China clearly lacks political and diplomatic experience – the ability to play complex games on a global chessboard.

As an incoming superpower with global ambitions but limited experience in great power politics, China studies carefully the Soviet and Russian experiences and leaves Russia to fight all the major fights at international forums. North Korea and the South China Sea are among the few exceptions where the Chinese show strategic activism.

Under Putin, the Russian military managed to close the capability gap with the most advanced Western militaries and transformed itself from a large, under-equipped and understaffed army into an effective, highly motivated and battle-hardened force. Putin has given the once-cash-strapped military machine a massive financial boost – and, more importantly, full political support.

Between 2013 and 2017, Russia landed in the world’s top-three nations on defence expenditure, just behind the US and China. In Europe, Russia has remained the single largest defence spender and buyer of major combat systems.

From 2012 until early 2017, the Russian military received 30,000 new and upgraded armaments and items of heavy military equipment. The Syria campaign and Russia’s ability to exercise strategic reach has once again made the military factor supported by active diplomacy one of the key determinants of successful realising its national strategic agenda.

In short, Russia is a major global power in outlook and reach, locked in a values-based confrontation with the West. But it still lacks all elements of a developed superpower.

But what it does most effectively is play the role of a strategic spoiler in times when the world is gradually accepting a new international configuration with a suite of established and emerging great powers that would dominate a future world order.