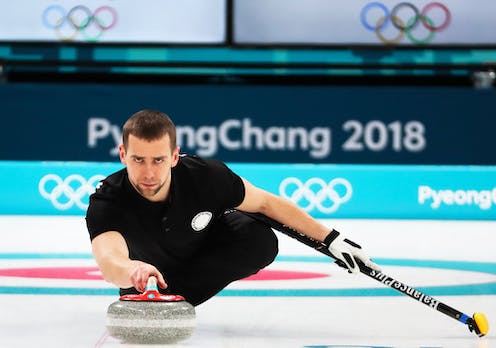 Thus far at this year’s Winter Olympics, the International Olympic Committee (IOC) has brought disciplinary proceedings against three athletes suspected of doping. One of them is Aleksandr Krushelnitckii, who won bronze in the mixed curling event. He has tested positive for meldonium.

Some have delighted in noting that the strange “broom and stone” sport of curling had been “rocked” by the doping allegation. It has also raised memories of Russian tennis player Maria Sharapova, who was banned for 15 months after testing positive to meldonium in 2016.

Krushelnitckii is also Russian, though technically competing in Pyeongchang as an Olympic Athlete from Russia (OAR). This is the term the IOC has given to the 160 or so Russian athletes deemed eligible to compete despite the continuing suspension of the Russian Olympic Committee over doping allegations at the 2014 Sochi Winter Olympics.

Read more: Russia's humiliating ban from the Winter Olympics is the right move to protect integrity in sport

Krushelnitckii and the ‘sabotage’ defence

The construction of the case against Krushelnitckii seems straightforward; his routine doping sample has come back positive for meldonium.

Although he left the Olympic Village without comment, it seems his defence will be that a fellow competitor – disgruntled at having not been selected to go to the Olympics – spiked or sabotaged his drink with the prohibited substance.

The burden of proof with this defence will be on Krushelnitckii. The “someone spiked my drink” defence is rarely credibly argued in doping cases and even more seldom successful.

In the build-up to the 2016 Rio Olympics, the World Anti-Doping Agency (WADA) appealed a decision by India’s National Anti-Doping Agency that annulled a doping infraction against wrestler Narsingh Yadav. The Indian body had accepted Yadav’s plea of “sabotage by another”, and the annulment permitted him to be selected to compete in Rio.

But, days before his first bout, WADA appealed to the Court of Arbitration for Sport (CAS).

CAS imposed a four-year ban on Yadav. It argued any contention that seeks to undermine the scientific integrity of a positive test needs more than vague, circumstantial assertions by the athlete that persons unknown and at a time unknown had the motive and opportunity to conspire to sabotage the athlete’s sample.

Also, in the Yadav case, the expert scientific witness noted that the prohibited substance in question – a steroid – would not have dissolved fully, and Yadav would likely have noticed sediment in his drink bottle.

Although the Yadav case gives an insight into the difficulties Krushelnitckii’s defence will face, athletes have, on occasion, mounted successful sabotage defences.

The most-celebrated example at CAS was that of Belgian judoka Charline Van Snick. She tested positive for cocaine at the 2013 World Championships and faced a two-year ban, but claimed that someone must have sabotaged her drink bottle with the substance.

At CAS, she provided detailed toxicology reports showing she was not a habitual user of the drug. This evidence, combined with the spiked bottle’s testing results, was enough to clear her of wrongdoing.

The only other example of the “spiking” defence being successful is where the athlete has specific evidence against another person – usually a rival or disaffected member of that athlete’s entourage – who had the motive and access to carry out the act.

A very recent example of this occurred last month. One of Japan’s top sprint canoeists, 32-year-old Yasuhiro Suzuki, was banned for eight years for spiking a younger rival’s drink with an anabolic steroid. The rivalry between the two had, by all accounts, intensified as their preparations for the 2020 Tokyo Olympics began in earnest.

Returning to Krushelnitckii, many will probably roll their eyes at his purported defence and dismiss it as just another Russian excuse.

Nevertheless, there is something odd about the circumstances. All those on the OAR team would have known they would be subject to enhanced testing in the immediate weeks prior to, and during, the Olympics.

And Krushelnitckii was, it seems, independently tested at the end of January at a training camp in Japan before his departure to Pyeongchang. The results were negative.

OAR participants would also have been acutely aware that they were part of a sophisticated political choreography between Russia and the IOC, which it is claimed may even have resulted in athletes entering the closing ceremony under the Russian flag and in the national uniform. Krushelnitckii’s positive test now puts pressure on the IOC not to allow this.

And the closing ceremony in Pyeongchang was an opportunity for Russia to draw a line under the past four years of doping allegations, in a year when it hosts another big sporting event – the FIFA World Cup.

A more immediate question is why an athlete might take a substance such as meldonium. It is widely used for treating different heart and vascular diseases and helps improve circulation, particularly in the brain. In terms of its performance-enhancing qualities, it appears it could have a positive effect on an athlete’s stamina and concentration.

Read more: Maria Sharapova's positive drug test: what is it and what does it mean for her?

Although the immediate reaction of many was to treat doping in curling as a joke, the pressurised nature of an Olympics and the demands it makes on athletes – both physically and mentally – could, presumably, tempt someone to use meldonium.