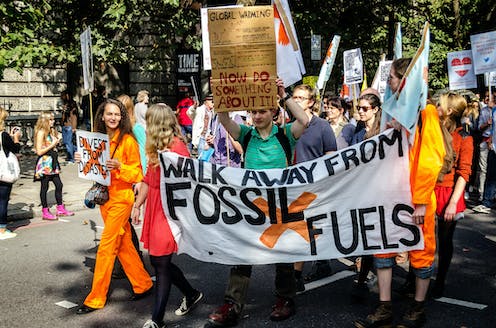 Throughout the world, people are taking direct action to tackle environmental problems – from Standing Rock in the United States, to the Carmichael coal mine in Australia, to the community groups standing against oil and gas exploration in Aotearoa New Zealand.

Some of the most important societal changes have been made because of direct action, but this isn’t always the story the mainstream media reports.

Our research has focused on the media framing of the debate surrounding oil and gas developments in Aotearoa New Zealand.

We found that it shifted discussions towards how drilling should take place, rather than whether it should happen at all.

We interviewed more than 50 people, including climate activists, representatives from non-government organisations and the oil and gas sector, and local government officers. We also analysed mainstream media coverage over a period of six years.

The research shows that mainstream media in Aotearoa New Zealand tended to present further fossil fuel development as something positive for the economy, and therefore society. Opponents have tended to be framed as irrational, few, and extremist.

For example, former prime minister John Key was quoted describing Greenpeace as “rent-a-crowd” or a 7,000-strong protest as a “few people wandering around the beach”.

One view that was commonly emphasised in reporting is that protesters are taking their democratic right to protest too far. This was illustrated in 2016, when the climate activist group 350.org organised direct actions throughout Aotearoa New Zealand, as part of a series of global Break Free events. They targeted branches of ANZ bank to inform customers about its NZ$13 billion investment in the fossil fuel industry.

In 2016, in the small university town of Dunedin, around 200 climate activists blockaded three ANZ branches. Many customers delayed their banking or went somewhere else, but some were encouraged by police to use “reasonable force” to climb over the protesters who were blocking the doors.

Until this point, mainstream media outlets had resisted negative framing of protesters, and had quoted activists at length in their reporting of the blockade. After police told bank customers to climb over the protesters, an elderly woman tried to make her way into the bank. Bank staff and activists encouraged her to use a side door, but police insisted on her going through the blockade.

Reporting of the protests quickly changed and activists were portrayed as disrespectful and taking the protest too far. Social media erupted, and 350 Aotearoa’s Facebook page attracted more than 2,000 comments within a few hours, including threats of violence against the blockaders.

Even though a protester reported being kneed by police, police were represented in the media as having been balanced and compelled to act in this way.

One of the activists later wrote:

In the media coverage, the burden of responsibility for that [elderly] woman’s distress was placed solely with us. The coverage successfully removed responsibility from ANZ and the police, who worked together to create that scenario.

The narrative that emerged pitched decent citizens against “unemployable”, “disrespectful” protesters, with the police as benign supporters of decency and the bank as an apolitical service provider. Broader debates about climate justice and corporate responsibility were not heard in these media reports.

Such media reporting about oil and gas exploration and drilling focuses on how fossil fuel extraction should take place, rather than whether it should happen at all. For example, the idea that Aotearoa New Zealand has the highest environmental standards in the world when it comes to exploration and extraction was often reported. In these reports, climate activists were portrayed as ignorant about the risks.

Discussions about the ethics of further fossil fuel extraction in a rapidly changing climate were lost – at a time when we need to be debating how we might change our economy and society to avoid the worst of climate change.

Climate change does raise ethical dilemmas and climate justice activists are trying to get us to think about them. As one of the people involved in the ANZ blockade in Dunedin said:

People couldn’t quite register the fact that there’s a vast difference between us making the day of a couple of people a bit more inconvenient, versus climate change killing people, and making people lose their homes. That’s considerably more inconvenient than not being able to get into a bank for the day when there’s another one just down the road.

The new government in Aotearoa New Zealand has sent some positive signals about taking climate change seriously. Consultation on a zero carbon act will begin later this year. In-depth media coverage that engages a broad range of people including activists, and pro-democracy reforms, will be essential to developing good debate and the best possible response to climate change.

Media portrayals of environmental activists as hopelessly idealistic, irrational hippies are nothing new. But when mainstream media continues to repeat these ideas, and frames the status quo as common sense, the public is denied opportunities for genuine debate about solutions to tricky environmental problems.