Just some examples of hazing described in the report include students:

This report marks an important milestone, because the media interest in the release of this report creates an opportunity for a turning point. A unified public and private condemnation of hazing in Australia.

Much as Rosie Batty brought family violence into the spotlight, and much as the #metoo movement unearthed the prevalence of sexual harassment and assault, the Red Zone report provides us with a unique opportunity to address yet another of society’s unaddressed shames.

Read more: From #MeToo to #RiceBunny: how social media users are campaigning in China 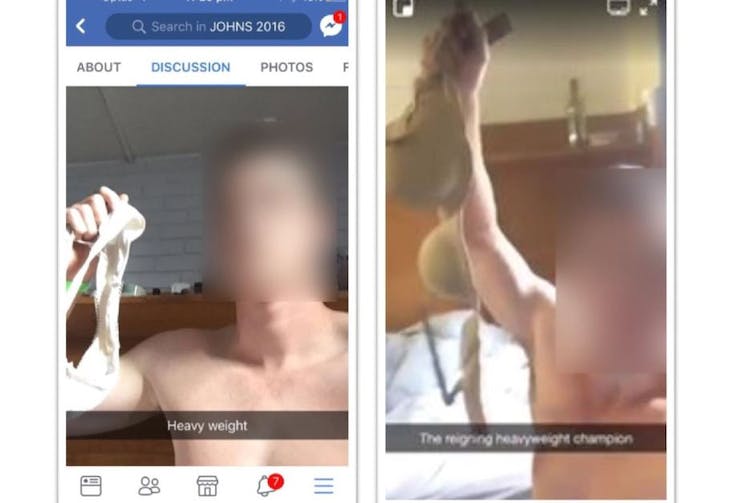 Male students uploaded photos of themselves holding women’s underwear to Facebook in one initiation ritual. The Red Zone Report

Most of the recommendations in the report are both sensible and uncontroversial. The authors recommend, for example, greater oversight of student residences, and more transparency and dialogue about college culture.

But they also recommend that hazing be criminalised across Australia, in particular:

the act of requiring an individual to undergo any act which is likely to cause bodily danger or physical punishment to any student or other person, as a precondition of joining or participating in a student group or organisation.

This recommendation should be approached with considerable caution. While it might garner significant political points, making a new criminal law is not always the best response to undesirable behaviours.

Criminal law as a response to undesirable behaviours

The criminal law is the state’s most coercive tool. Used to its full extent, it can lead to you being arrested, subjected to a lengthy and expensive trial, having your liberty revoked for years, and suffering a life-long stigma. The criminal law is a necessary part of a fully functioning liberal democracy, but it should be used with extreme caution.

Research has repeatedly proven the effectiveness of a criminal justice system is inextricably linked to whether it is perceived as legitimate, fair and coherent. When the criminal law is too broad, too narrow, or inconsistent, it loses legitimacy. It also loses legitimacy when new laws are introduced that are purely symbolic and add no real substance to existing laws.

It is questionable, for example, whether the new crimes of drive-by shooting, home invasion, and carjacking add much to the criminal law. Many of these behaviours were already captured by crimes such as attempted murder, reckless conduct endangering serious injury, aggravated burglary, and armed robbery.

There is an often forgotten criteria that should be met before any new law is introduced. Specifically: is the targeted behaviour already a crime? If so, is the answer really to criminalise it again, or is the more appropriate response to dedicate more resources to policing existing crimes?

When the Red Zone report recommended introducing specific criminal laws that target hazing in Australian universities, it neglected to consider whether those behaviours might already be criminal.

Hazing laws in the United States

Hazing is certainly a crime in the United States. It has been specifically criminalised in all but six US states for decades now.

Read more: The wrongs of passage in fraternity hazing

In Texas, for example, it is a crime to intentionally or recklessly engage in an act, directed at a student, which endangers their mental or physical health or safety, for the purpose of pledging or initiation into a student organisation.

In New York, it is a crime to intentionally or recklessly engage in conduct, during another person’s initiation or affiliation with an organisation, which creates a substantial risk of physical injury.

And in California, it is a crime to engage in any method of initiation into a student organisation that is likely to cause serious bodily injury to a former, current or prospective student. 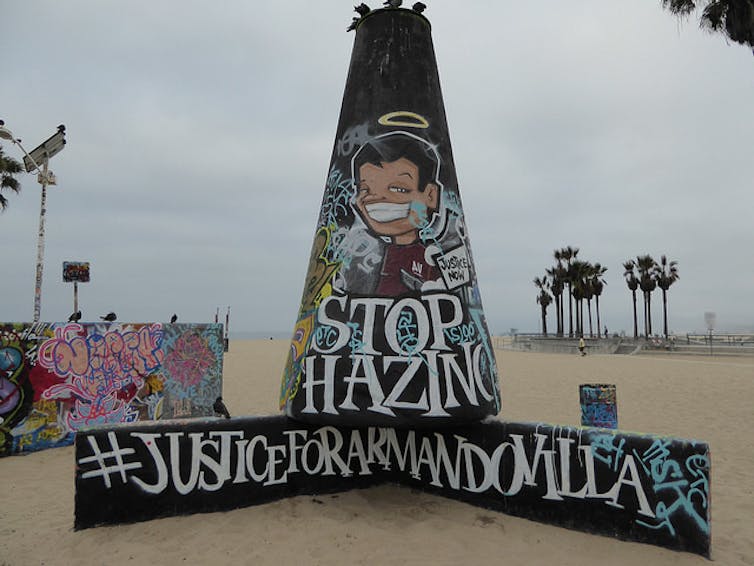 To prove these crimes, the prosecution would have to establish:

Except for the requirement the victim be a student being initiated into a student organisation, this looks very much like a number of offences that already exist around Australia.

Is hazing already a crime in Australia?

Most jurisdictions in Australia already make it a crime to intentionally or recklessly engage in conduct that creates a substantial or real risk of serious harm, including both physical and mental harm (such as South Australia and the Northern Territory).

Further, in addition to there already being a number of criminal laws that would capture most of the hazing behaviours described in the Red Zone report, there are also a number of issues with the way the proposed offence is framed.

Looking at their proposed offence, the prosecution would need to prove:

First, it is peculiar that requiring someone to do something that is likely to cause them bodily injury would only be criminal if it occurs in the context of a student initiation ritual. Does this make such behaviours acceptable in other contexts?

Second, there are many forms of hazing that would not be captured if the legislation was limited to circumstances in which the victim suffered bodily injury or physical punishment, particularly emotional and psychological torture.

And third, it would be somewhat unorthodox to ask the prosecution to establish that a defendant required a victim to do something. Such a requirement would raise serious questions of free will and autonomy, issues which are not sufficiently addressed in the report. In many US states, for example, legislation specifies that people cannot consent to participating in initiation rituals that would constitute hazing.

The Red Zone report will hopefully herald a new era. Hazing is a blight on society. And the criminal law may well be the appropriate response to hazing behaviours.

But in an age where the criminal law is treated as both a panacea for society’s woes and a constant failure (while it is, in fact, neither), much more consideration is needed before any new criminal laws are introduced.