This is the second in a four-part series on sugar. Stay tuned for articles covering the link between sugar and diseases, and whether it’s better to substitute sugar with fruit. Catch up on the first instalment, about whether we should quit sugar, here.

There are many different types of sugars we add to our baking or hot drinks such as white sugar, brown sugar, raw sugar and honey. But when we’re looking at a packaged product the ingredients list will have many more options still. Corn syrup, palm sugar, molasses, maple syrup and agave nectar are but a few.

Despite the large variety of sugars, they are very similar nutritionally. They are comprised predominantly of glucose, fructose and sucrose, which are the basic forms of sugar. Glucose and fructose are slightly different in chemical structure, while sucrose is a sugar composed of one glucose and one fructose.

The factors that distinguish sugars are their sources (from sugarcane, beet, fruit, nectar, palm or coconut saps), flavour profiles, and the levels of processing.

Read more: Multigrain, wholegrain, wholemeal: what's the difference and which bread is best?

White sugar: also called table sugar, is the final product of the processing and refining of sugarcane or beet. During the refining process, moisture, minerals and compounds that give sugars their colour are removed, and white refined sugar is formed. The byproduct containing the removed compounds during sugar refining is known as molasses.

Raw sugar: is formed if the final refining process is bypassed.

Brown sugar: is refined white sugar with varying amounts of molasses added. Raw sugar, brown sugar and molasses are higher in compounds that provide colour, from natural sources or byproducts of the breakdown of sugar (caramel) during sugar processing.

Honey: is sugar-rich nectar collected by bees from a wide variety of flowers. Fructose is the main sugar found in honey, followed by glucose and sucrose. The sweet taste of honey is attributed to its higher fructose content, and fructose is known to be sweeter than glucose or sucrose. Honey is about 17% water. 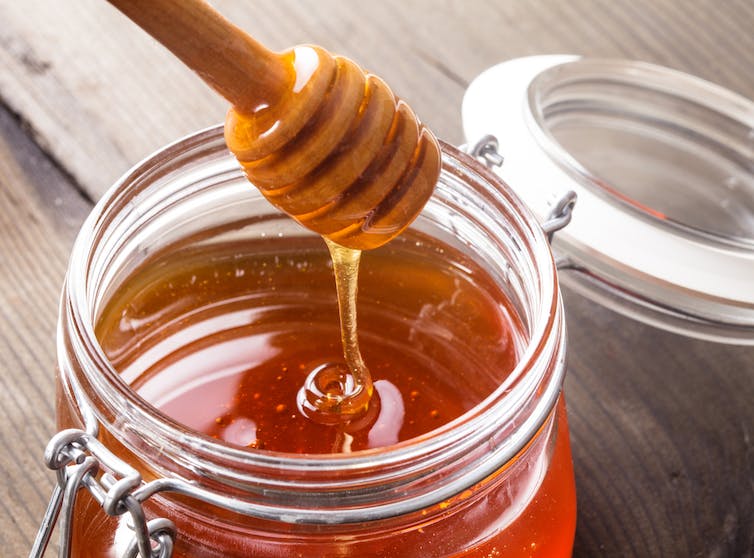 Honey contains a sweeter type of sugar, meaning you don’t have to use as much. It also contains more water than table sugar. from www.shutterstock.com

Syrups: can be produced from a wide range of plant sources in the forms of sap and fruits. Some examples include agave (a desert succulent), corn, date, grape, maple and pomegranate syrup.

Because agave and corn are more complex carbohydrates, they’re first broken down into sugar during food processing before being concentrated into syrup. Corn syrup is often further processed into the sweeter version, high fructose corn syrup.

Read more: You don't need to quit sugar to improve your health

Fruit sugar: can be made from the drying and grinding of fruits such as dates. Sugar produced through this process shares similar nutrient composition with the fruit (such as fibre and minerals) but it is lower in water content.

Which type is best?

Several studies have reported adverse effects of white sugar and high fructose corn syrup on our health. So should we substitute these types of sugars with another?

Some sugars such as honey and agave syrup are higher in fructose. Fructose is sweeter than glucose and sucrose, hence a smaller amount may be needed to achieve similar level of sweetness from white sugar. Honey and syrups also have a higher water content. So the sugar content is less than the equivalent weight of white sugar.

Due to the different levels of processing and refining, sugars that are less processed and refined tend to have higher contents of minerals and compounds that give plants their colour. These compounds have been found to increase antioxidant capacity, which reduces the cell damage in the body that causes several chronic diseases.

Read more: What are antioxidants? And are they truly good for us?

Different types of sugar raise the amount of sugar in our blood at different rates after being consumed. The glycemic index (GI) concept is used to compare the ability of different carbohydrate-containing foods in raising blood sugar levels over two hours.

Pure glucose is used as the reference carbohydrate and it’s given a value of 100. Higher GI indicates greater ability of a food in raising blood sugar levels, and having high levels of sugar in the blood can lead to disease. High GI foods tend to be less filling too.

The GI values in the table below are compiled from the GI database. Corn syrup has the highest GI as it is composed mainly of glucose. White sugar, composed of 50% glucose and 50% fructose, has slightly lower GI. Based on available values in the GI database, agave syrup has the lowest GI value. Therefore, it’s a better option than other sugars in term of blood sugar management. 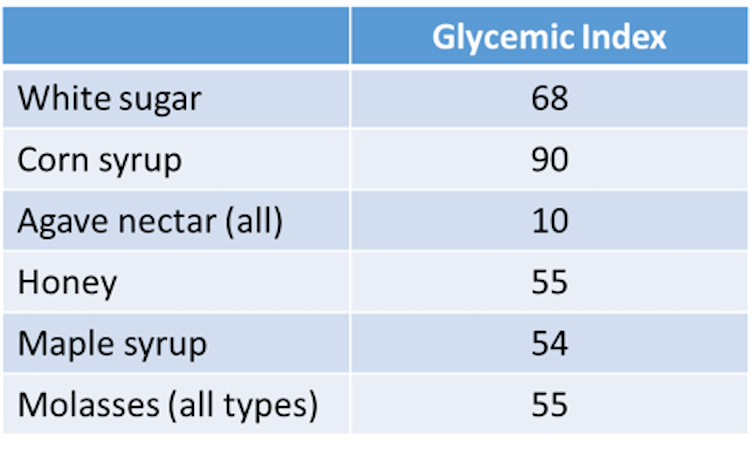 Honey has been reported to possess several germ-killing capabilities due to the presence of several naturally-occurring compounds. But it’s still unclear how the antimicrobial property of honey may be obtained.

In the end, sugar in our body is still sugar. So while honey, raw sugar, date sugar and molasses are “better” than white and other types of sugar, everyone should try to cut down their sugar intake.