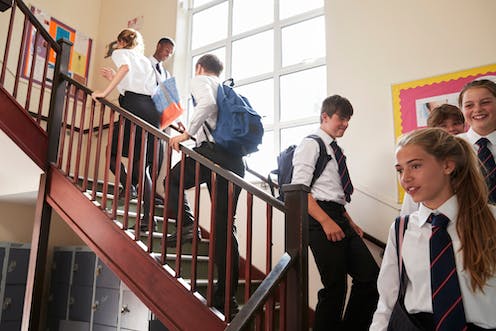 Sexism still exists in workplaces and schools despite more than 40 years of formal and informal activities to eliminate it, and the Australian government’s acceptance that gender equality is linked to improved national productivity, innovation and economic growth.

Programs followed International Women’s Year in 1975 in support of the United Nation’s declaration to eliminate discrimination against women, particularly in education and employment.

Women have not achieved leadership roles in equal numbers with men in workplaces. They work in a highly segregated labour market, the gender pay gap continues, women have less superannuation and so on.

Women increased their numbers to one third of parliamentarians in the 1990s, but todays’ numbers are similar. Women were a third of vice-chancellors in the 1990s, as they remain today.

There are nine women CEOS of ASX 200 companies, almost 5% but it’s a decrease by one from the previous year.

Smooth career trajectories are interrupted in many ways for women, including their hours of unpaid work, when compared to men, whether they are primary breadwinners, or work part-time. Here, Australian women lead the world.

In 1984, the Australian government developed its first national policy for girls’ education with recommendations designed to foster equitable outcomes. It was updated by successive governments until 1997, 21 years ago.

In new national and global digital companies, women are in smaller numbers than men. It’s another missed opportunity. In Australia, women are only 24% of start-up founders and only 5% attract investment.

Progress in ‘boys’ subjects since the 1970s

One of the earlier government objectives was to increase the numbers of girls achieving in what were termed the “boys” subjects: maths, physics, chemistry and accounting. This was done to broaden girls’ career choices.

But their academic success has not translated into similar success as workers and leaders in our community. So, Australia’s economic potential is missing women’s possible contribution.

Another early goal was to increase the numbers of women in apprenticeships. Numbers are slowly increasing in non-traditional work, but fewer girls study Victorian Certificates of Applied Learning than boys in secondary schools.

Research by Supporting and Linking Tradeswomen (SALT) has found women who are successful in trades learnt to use tools at an early age.

Today, girls are not choosing the new “boys” academic subjects, such as computing and software development. So, again, they’re missing out on future job opportunities.

But subject choices are not the only keys to equity. For example, boys are more likely than girls to become organisational leaders. We hear unconscious bias and sexism is a reason for women’s disadvantage in organisations, and there are guidelines for how it can be challenged.

Men’s and women’s life experiences include their many influential years in schools and universities. Here they may have experienced institutionalised sexism, sexist language, gendered stereotypes and gendered behaviour, including sexual harassment.

Read more: Unconscious bias and its impact on the gender salary gap

So sexism and unconscious bias in schools, just as in businesses, needs to be examined and challenged. Teachers and students should understand traditional assumptions about girls’ and boys’ behaviour, subject choices or career choices can be learned (and unlearned).

Past beliefs that girls could not do maths, or be footballers, tram drivers, lawyers or doctors or politicians, for example, were challenged, and changed. Kindergarten is where it needs to begin.

Gendered schooling should be challenged in a 21st century democracy. Why do we maintain single sex schools, segregating boys and girls, when we don’t segregate students based on other demographics, such as race?

Another 170 years for gender equity?

We are held back by gender stereotypes, so much so, that recently the World Economic Forum Report stated “things have worsened and economic gender equality will not be achieved for another 170 years”.

As we look forward, we need to remember women’s economic success is not only empowering, but essential for economic growth and social development on a global scale.

Schooling should be about individual student needs and their pipelines to success, within a whole school approach to challenge sexism. Not based on the traditional attitudes of political, business and educational leaders and school staff who may be influenced by unconscious bias. Teacher training needs to incorporate ways to recognise and tackle sexism.

We urgently need to develop a new government gender equity policy framework for schooling with guidelines, transparent targets, measuring and progress reporting. And this should be updated as students’ and society’s needs change. Creating gender equity is a complex and continuous process.