On March 17, the 2018 duck shooting session will open in Victoria. The first shots were fired in Tasmania and South Australia last weekend. The Northern Territory allows certain types of bird shooting later in the year. Duck shooting is prohibited in the rest of Australia.

States and territories have jurisdiction over duck shooting. In Victoria a new raft of regulations has been introduced to try to limit the damage to the state’s wetlands. One change of note in Victoria is that this year the Blue-winged Shoveler cannot be legally shot due to the low numbers of the species. 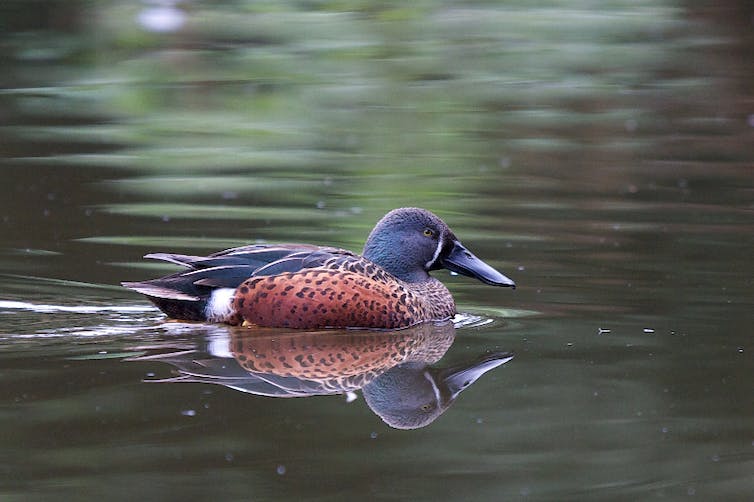 The Blue-winged Shoveler has been added to the protected list in Victoria this year for the first time. Flickr CC

Other new regulations require that hunters recover the birds they shoot. This rule serves to formalise what Victoria’s Game Management Authority (GMA) refers to as “standard practice for responsible hunters”.

However, in most other respects Victoria’s 2018 duck season will look almost indistinguishable from previous years. It will still be three months long, with a “bag limit” of ten birds per person per day.

In Tasmania, authorities postponed the shooting start time in 2018, among a raft of other minor amendments.

In fact, the various states regularly make minor changes to the rules. Hundreds of minor adjustments have been made over many decades. While these changes may seem significant, from a broad socio-legal perspective they do little to challenge the status quo.

Playing by the rules?

The ABC has aired allegations that unsustainable hunting is on the rise and that regulators feel unable to enforce the rules. It revealed pits containing around 200 unrecovered shot birds from the 2017 opening weekend at Victoria’s Koorangie State Game Reserve alone.

Activists interviewed in the report claimed to have brought out 1,500 dead birds from the wetlands. Of these, 296 were protected species, including 68 endangered Freckled Ducks. 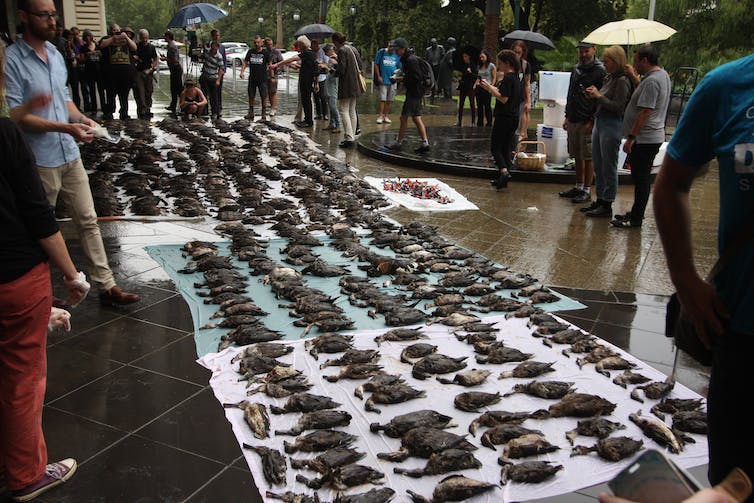 A supplied image of over 800 native waterbirds, including 68 threatened Freckled Ducks, displayed outside the premier’s office at 1 Treasury Place, Melbourne, by the Coalition against Duck Shooting on March 20, 2017. AAP

In my book Animals, Equality and Democracy, I argue that there is a generalised tendency for animal welfare laws to be more effective for socially visible animals. Laws that govern the welfare of zoo animals have improved much more quickly, for example, than those that cover animal welfare in factory farms.

Duck shooting is not a highly visible cause of animal harm. Relatively few people live near the wetlands where shooting takes place. But animal advocates have been effective in making it visible, despite laws that limit their ability to do so.

Elaborate events such as Duck Lake, in which animal activists performed their own version of Swan Lake on the opening morning of the 2016 Tasmanian duck shooting season, help generate media attention.

In 2017, long-time Victorian anti-duck-shooting campaigner Laurie Levy from the Coalition Against Duck Shooting was once again fined for entering the water to help an injured bird. While such activities go some way in generating public visibility, they have thus far not been able to stop duck shooting outright.

At present, only 28,000 Australians are registered duck shooters. According to 2012 Australia Institute analysis, 87% of Australians support a ban on duck shooting. There is mounting evidence that endangered and non-game species are also being killed.

Before being re-elected at this month’s Tasmanian state election, the Liberal state government promised to soften the state’s gun laws. It also committed to “always protect the right of Tasmanians to safely and responsibly go recreational shooting”.

In Victoria the picture is a little more complex. A 2016 report asserted that most members of the state’s Labor Party oppose duck shooting and that the Andrews government’s continued support may cost it votes.

Indeed, despite the pressure from within the ALP, the daily bag limit for the 2018 season is ten, compared with just four in 2016.

The Pegasus Economics review identifies “industry capture” as a significant factor in the continuation of duck hunting. Industry capture refers to a situation in which industry has a disproportionately close and influential relationship with policymakers compared with other relevant stakeholders.

The decision by the Tasmanian Liberal Party to share details of its proposed softened gun laws with shooters and farmers, and not other interested parties or the public, suggests industry capture is a genuine factor in Tasmania too.

With widespread community opposition ranged against the entrenched interests of the shooters themselves, state governments will need to make some big calls on the future of duck hunting, rather than the current tinkering around the edges.