With the death of Stephen Hawking, the world has lost an adventurer.

I was one of the many who first encountered the deep ideas of cosmology through Hawking’s book A Brief History of Time, and found myself inspired. To his readers Hawking revealed a whole new world — showing how physics can address some of the deep questions of our existence, all the way to the deepest of all: how did the universe begin?

Physics is often perceived to be dry and devoid of imagination, but as researchers we realise that could not be further from the truth. In research, we routinely throw assumptions in the bin, play with “what if” scenarios, and rely on insight and creativity to explore new ideas that could take us beyond the bounds of the physics we already know. Stephen Hawking was a master at this.

What made Hawking such a trailblazer were his attempts to merge quantum physics and general relativity.

The situation in modern physics is both powerful and dire. We have two incredibly strong theories that have passed every test we can throw at them, and yet we can’t unify them.

General relativity is our theory of gravity, with thanks to Einstein, and quantum physics is our theory of everything else – in particular, how particles interact. Both have been tested to incredible precision and have become everyday tools. We use general relativity to make our GPS system accurate, and quantum physics is used to design key elements of all high technology.

However, we still have no theory that combines the two, and this has perplexed physicists for a century. Merging the two theories engaged Einstein for the latter half of his life to no avail.

The quest for a quantum theory of gravity that can also explain the whole universe, is known as the search for a “theory of everything”, or “ToE”.

Hawking’s most famous insight was to take seriously the question of what would happen if you took a quantum system and put it near the event horizon of a black hole. Even without a final theory of quantum gravity, he revealed that in some special circumstances you can calculate solutions anyway.

Read more: Tributes pour in for Stephen Hawking, the famous theoretical physicist who died at age 76

The ‘mind of God’

Hawking famously described the quest for a theory of everything in analogy to God:

If we do discover a theory of everything… it would be the ultimate triumph of human reason — for then we would truly know the mind of God.

He was forced to explain this line many times. As a devout atheist he made it clear that he didn’t mean we would understand a deity, but rather that we would be able to explain, using physics, the birth of the universe itself, and all of the processes within it, thus demonstrating there is no need for a god.

God may exist, but science can explain the universe without the need for a creator. 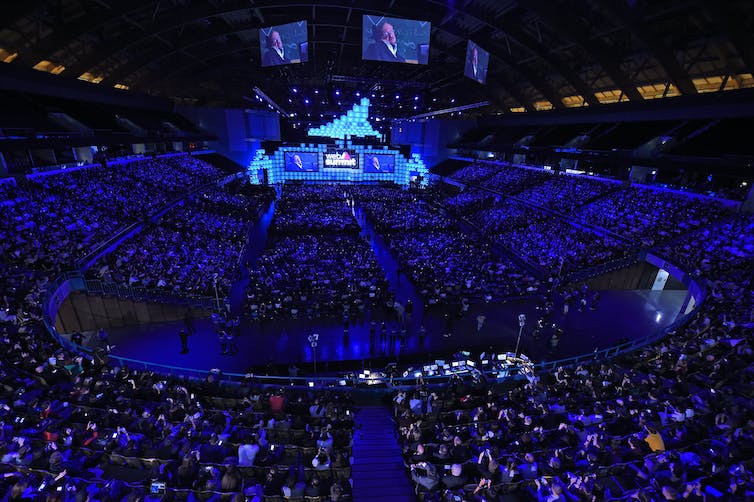 Stephen Hawking speaking on centre stage via video link during the Web Summit 2017 Opening Cermony at Altice Arena in Lisbon. websummit/flickr, CC BY

How the big bang banged

We know that nothing, not even light, can escape a black hole’s gravitational pull. Nevertheless, Hawking discovered that black holes should “glow”. The light they emit is now known as “Hawking radiation”.

But if light can’t escape from black holes, how can they glow?

The event horizon of a black hole is the point of no return. Once you are within the event horizon you can never escape, and no light you emit will ever be seen outside. The reason black holes can glow is because no light actually emerges from inside the event horizon. The light gets created just outside of it, thanks to the black hole’s interaction with the quantum vacuum.

This leads to another question, because another important rule of physics is conservation of energy; you can’t create something from nothing. So in order to glow, the black hole has to pay a price, and it pays with the only currency it has – its mass.

As the black hole emits light it gets lighter, and the lighter the black hole the more dramatically it shines, which accelerates its demise, until it evaporates into nothing in an intense flash of radiation.

As spectacular as that may be, it may seem a trifle esoteric: why should we care how black holes behave? Well, the theories Hawking was developing also have implications for the question of how the universe began. Hawking proposed a mechanism, through quantum physics, by which a universe could be born. In other words, he proposed an answer to how the big bang banged.

The symphony of space

Hawking became one of the world’s most recognisable physicists. His fame saw him appear frequently in popular culture including on the Simpsons and Star Trek (where he played himself). Not only a superb researcher, he was a brilliant communicator, and this set him apart from his peers. His A Brief History of Time sold more than 10 million copies and was translated into at least 35 languages. 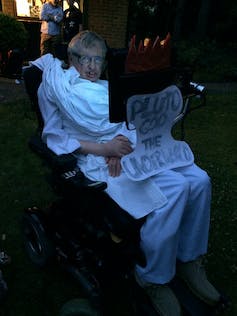 Hawking held a party to celebrate the New Horizon Spacecraft passing by Pluto in 2015. epicfireworks/flickr, CC BY

One of the fantastic things about A Brief History of Time was that it made complex ideas simple, but also didn’t shy away from giving the gory details. Hawking showed respect to his readers and to their potential to understand – perhaps having higher expectations of them than they had of themselves. As a result, he was able to convey a great feeling of the depth of thought behind the theories.

Millions of readers engrossed in his book left with a sense of wonder, even if they fell short of full understanding. Like listening to a symphony, you can appreciate the beauty and complexity of the music without knowing how to play any of the instruments.

Hawking played the symphony of space into words on a page, which left people with the feeling they had experienced something profound, even if they hadn’t fully understood it.

That Hawking survived until age 76 is truly remarkable. 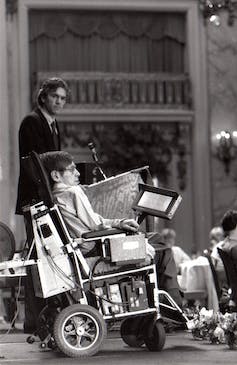 Stephen Hawking in San Francisco at the amyotrophic lateral sclerosis (ALS) convention in the mid 1980s. wwworks/flickr, CC BY

Diagnosed with amyotrophic lateral sclerosis (ALS) as a 22 year old, he was given only two years to live.

Rather than being defeated by such a diagnosis he dove into research with an urgency perhaps inspired by his limited time. He determined to do something significant with his time remaining, and thus attacked some of the most profound and challenging questions in physics.

To the benefit of humankind he did not succumb to the disease and was able to continue researching for another half-century. That he refused to let physical difficulties deter him from his life’s work is an inspiration to us all.

He was also a real character, and is famous for placing high-profile bets on big physics questions (which he usually lost). In 1974 he bet that the x-ray source at the centre of our galaxy, Cygnus X-1, was not a black hole, but conceded the loss due to overwhelming evidence by 1990.

From our modern perspective it’s astonishing to realise that all of his early research on black holes was done before we were even sure they existed.

One of Hawking’s most fascinating bets was about the “information paradox”. The fact that black holes can evaporate turned out to be extremely perplexing, because all the information about what went into them is lost as the black hole vanishes. In quantum physics you can’t destroy information, thus the paradox.

Although Hawking conceded this bet very publicly in 2004, most physicists would still argue that the answer is unresolved. Recently it has seen a resurgence of interest with the “firewall paradox” and Hawking himself was adding new ideas to the debate even in his last few years.

As we say farewell to one of the greatest thinkers of our time, I leave you with some of his best advice:

Look up at the stars and not down at your feet. Try to make sense of what you see, and wonder about what makes the universe exist. Be curious.

With Stephen Hawking’s passing, humanity has lost a brilliant mind and an inspirational human being.