Many Australians feed wild birds in their gardens – yet the practice is discouraged by many bird groups and governments. That’s in stark contrast to what’s encouraged in other countries, so what should we be doing?

It’s an issue I studied in detail for my new book The Birds At My Table: Why We Feed Wild Birds and Why it Matters, out this month.

But first, let’s look at what happened when a sudden cold snap gripped parts of the Northern Hemisphere recently. This provides a clear example of a positive relationship between birds and humans, and how bird feeding can work.

Read more: 'Beast from the East' and freakishly warm Arctic temperatures are no coincidence

When the “Beast from the East” rolled through Great Britain a few weeks ago it brought both dismay and delight to those housebound people peering out at their gardens smothered in metres of snow.

Birds – sometimes of species almost never seen in towns – were everywhere. Twitter (no pun intended) was filled with images of desperate animals.

For the millions of people who provide food for wild birds in their gardens, this became a time for action. Social media was filled with pleas for people to venture through the drifts to refill their feeders: the birds need you NOW!

Bird and conservation groups in the UK broadcast the same message: feeding can mean the difference between life and death.

What struck me immediately about this desperate situation were the similarities to the UK’s infamous Great Blizzard of 1890-91. Despite the prevailing Victorian attitudes of “waste not, want not”, the severity of the conditions and the plight of the suffering birds lead to the first widespread examples of public bird feeding.

Spurred on by a multitude of items in the newspapers of the day, people were implored to search their kitchens for anything that the starving birds might eat.

A letter to the London Daily News from “Johnnie Thrush” suggested a mix of stale bread, water, oatmeal or barley meal and a few handfuls of hempseed.

This mixture made into a thick stiff paste which we can all sup with our bills, and the smallfry – those perky tits, chaffinches, sparrows etc., which abound everywhere, are equally delighted with the crumbs.

This appears to have been a pivotal moment: thereafter, feeding wild birds – a practice that would normally have been regarded as simply wasteful – became acceptable, widespread and even a sign of moral expression. 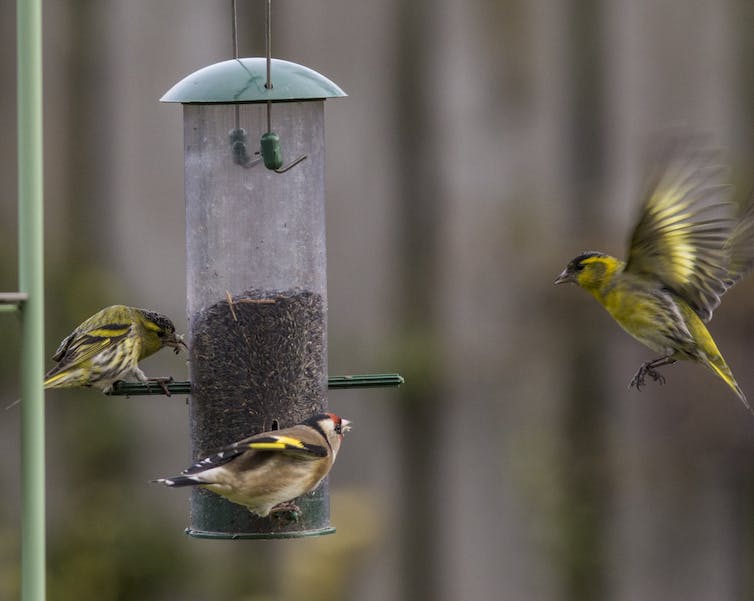 Wild birds at a garden feeder in the UK. Flickr/john purvis

Today in the UK the feeding of wild birds in private gardens is a gigantic industry, and not just in cold weather conditions. Millions of people provide enormous amounts of bird food, mostly seed, all of which is consumed.

It is almost certainly the most popular form of interaction between humans and wild animals, and is actively promoted by organisations including the Royal Society for the Protection of Birds and the Humane Society in the United States.

The message is clear: if you care about birds, feed them!

In Australia, the social landscape could hardly be more different. The message – if you dare to ask – has long been emphatically, although still informally, “Don’t!” No jurisdictions have actually enacted anti-feeding legislation, but many have come close. 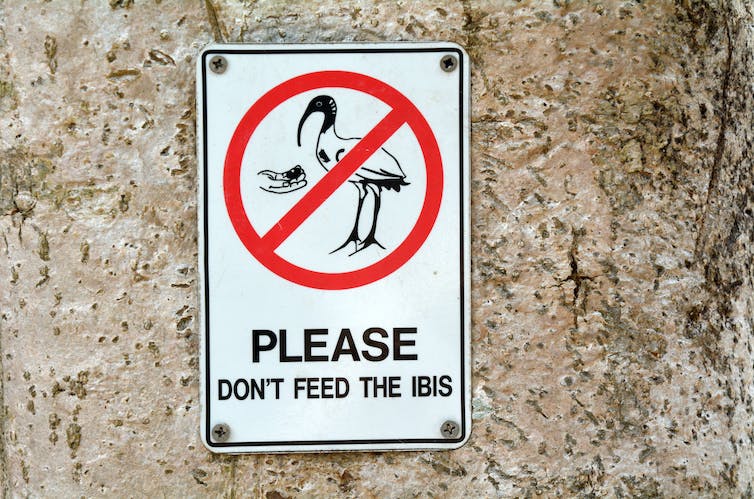 Warnings in public places not to feed the wild birds, but that’s different to feeding wild birds in the garden. Shutterstock/ChameleonsEye

The abundance of (but thoroughly ignored) Do Not Feed The Birds signs now common in parks is part of this approach. But I would argue this is a very different matter to bird feeding in domestic gardens.

The unavoidable conclusion gained from a multitude of sources here in Australia is that any form of bird feeding is wrong, dangerous, foolish, and profoundly misguided.

Those in the Northern Hemisphere who are interested in feeding birds can obtain endless and detailed advice on every conceivable aspect of the practice, and can buy a bewildering array of foods and feeders.

The contrast to Australia is stark and intriguing. Although there are plenty of bird feed products available with the label “Wild”, these are mainly mixes for cage birds. In terms of advice on feeding wild birds, however, this is almost all negative.

For example, BirdLife Australia says a “constant supply of ‘artificial’ food can be unhealthy for birds” and recommends that people opt instead for creating a “bird habitat through planting and providing water”. 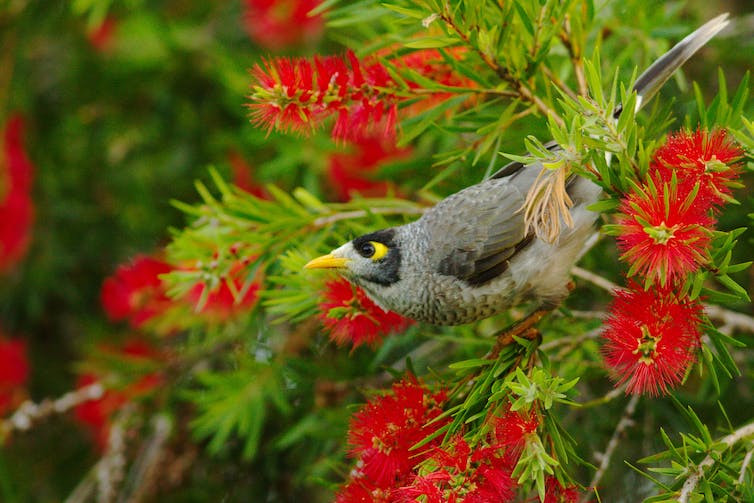 Wild birds will get most of their food from the natural habitat so planting natives shrubs can help attract birds to a garden. Flickr/Klaus Stiefel, CC BY-NC

Despite the ubiquity of the anti-feeding message that almost everyone in Australia is aware of, the participation rate here is virtually identical to that of countries where the practice is promoted and encouraged.

Around a third to over half of all households in this country regularly feed birds at their homes. That’s millions of people, most of whom care deeply about whether they are doing the right thing but who have nowhere to get advice or directions on best practice.

The only information available is a long list of the alarming things that can result from feeding birds, such as this advice against feeding lorikeets. 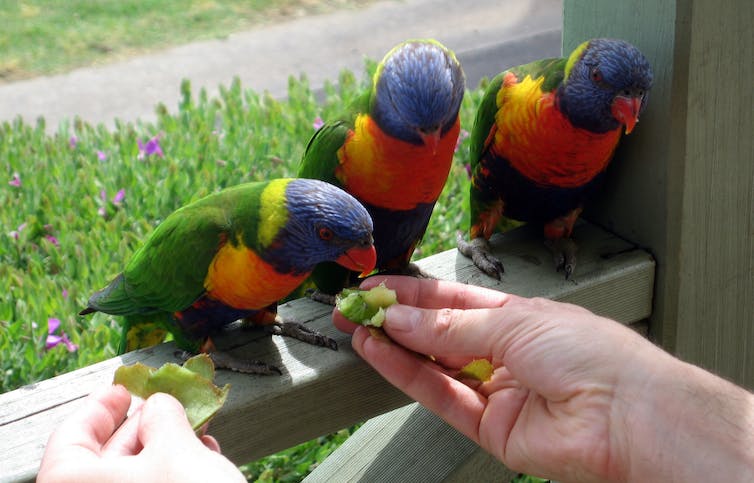 These were indeed disturbing and included (to take just the top few): dependency (the birds may become reliant on the food we provide); disease (feeders can spread disease); and nutrition (the food provided is often of poor quality).

If these concerns are valid, everyone needed to be aware of them and adjust – or stop – their seemingly trivial pastime accordingly.

Finding, distilling and understanding the research on which these issue were presumably based resulted in my new book. 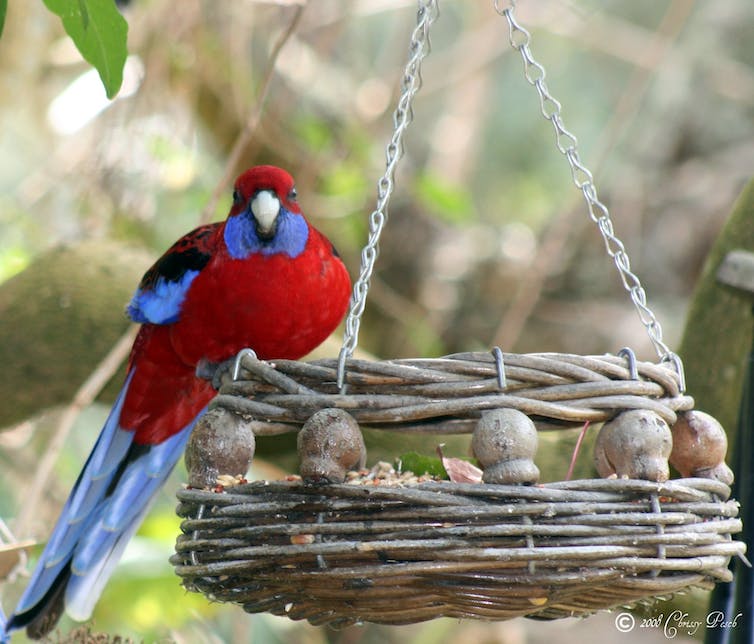 It was a process that profoundly altered my perceptions and made me even more determined to encourage a meaningful discussion about bird feeding, here and around the world.

It’s a complex picture (as usual) but to address the key issues raised earlier: there is no evidence that birds become dependent on the food we provide (except in extreme conditions such as severe snow or drought).

Reassuringly, most birds visit feeders for a passing snack and the majority of their daily diet is still natural.

How to feed the birds

So if we want to feed the birds in your garden then there are a few very simple rules you should follow to make sure you feed them the correct way.

Read more: Birdbath, food or water? How to attract your favourite birds to your garden

Remember that the feeders are really for us, rather than the birds. They don’t need them but they don’t seem to mind. 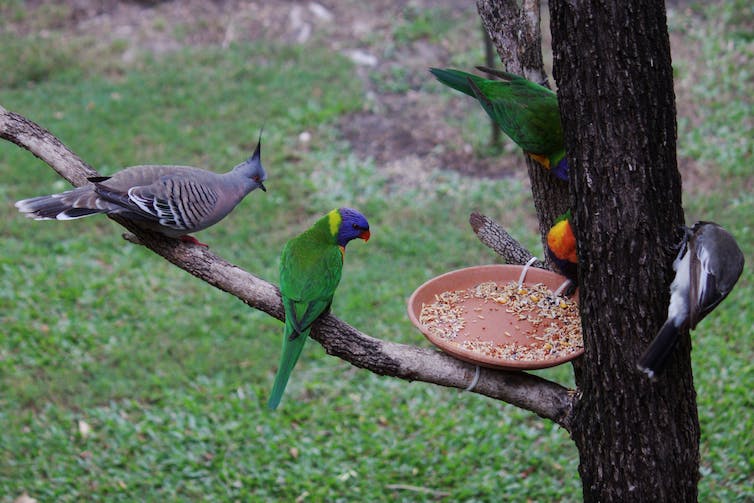 If you do want to feed the birds then keep it clean and keep it nutritious. Flickr/Lance, CC BY-NC-ND