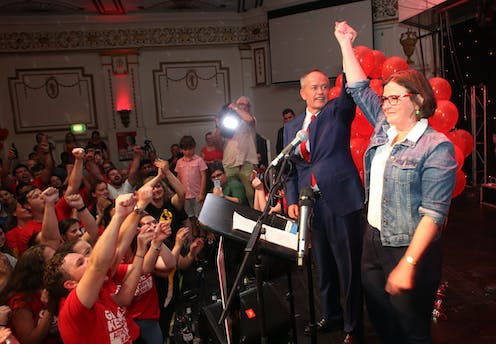 Labor has held the Victorian seat of Batman, with the ALP’s Ged Kearney leading the Greens’ Alex Bhathal 52-48% on the two-party vote with almost two-thirds of the votes counted.

Hanging onto the seat, which is in Melbourne’s...

Labor has held the Victorian seat of Batman, with the ALP’s Ged Kearney leading the Greens’ Alex Bhathal 52-48% on the two-party vote with almost two-thirds of the votes counted.

Hanging onto the seat, which is in Melbourne’s northern suburbs, is a big relief for Opposition Leader Bill Shorten, especially given his risky move of announcing in the last week of the byelection campaign his plan to scrap cash refunds for excess dividend imputation credits.

Shorten told jubilant Labor supporters: “Labor is back in Batman. From the bookmakers to the commentators – they wrote Labor off in Batman and you have proved them wrong.”

Kearney said: “This is a victory for true Labor values”, and “Labor is on its way to a Shorten government”.

Both Shorten and Kearney said they had heard the messages from the electorate.

The Batman result came as in the South Australian election, the Liberals won a majority in their own right, defeating the Labor government, which had held office for 16 years. The much-vaunted bid by former senator Nick Xenophon to gain the balance of power for his SA-Best party proved a fizzer.

As the campaign wound up, Labor robocalled voters in Batman to stress that most of those affected by the proposed tax change would be people on high incomes. The byelection result will to some extent be a counter to the government’s fierce criticism of the policy.

The failure to wrest Batman is a big setback for the Greens, who were buoyed last year by their victory in the state electorate of Northcote, which is within the federal seat.

On the figures late on Saturday night, there was a two-party swing of more than 1% to Labor from the last election.

Kearney had more than 42% of the primary vote, while Bhathal was on a primary vote of about 41%. There were ten candidates in the field but the Liberals did not run.

The Greens nearly took Batman in 2016 from the ALP’s David Feeney, a right-winger who was very unpopular in the electorate and had a bad campaign. The byelection was caused by Feeney’s resignation in the citizenship crisis.

Kearney, former president of the Australian Council of Trade Unions and from the left, was generally regarded as a very good candidate who was an appropriate fit for what is seen as a “progressive” seat. In the electorate during voting on Saturday, Shorten said Kearney “has done wonders to lift confidence in Labor in this electorate”.

Conceding defeat, Bhathal said: “I’ve always said regardless of the result we would have a strong woman member from a caring profession”.

Bhathal was making her sixth tilt at the seat, which had been moving toward the Greens previously, as its southern part gentrified. But the Greens campaign was marred by bitter internal controversy over Bhathal’s candidacy, with Greens dissidents lodging a formal protest about her, accusing her of bullying.

The Greens campaigned strongly on the proposed Queensland Adani mine, an issue Shorten struggled with as he sought to stop votes haemorrhaging to the Greens.