A Syrian woman is waiting in line for an aid package, distributed by an international aid worker from the UN. War has left her without access to food, water or clothing, and she needs this aid package to survive until next week.

The aid worker tells her she will get her package – in exchange for certain favours.

This is an imagined scenario, but the issue of sexual exploitation for aid is real. It is known as “survival sex”. My research shows victims are not currently protected by international human rights law. Urgent action is required to enforce zero tolerance and to improve accountability of perpetrators.

Read more: Life on humanitarian compounds is removed from reality – this can fuel the misconduct of aid workers

Survival sex is an abuse of power between international humanitarian aid workers and local people. It is the most offensive form of sexual exploitation and it happens everywhere.

An official report, Voices of Syria 2018, reveals some women in refugee camps have to offer sexual favours in return for aid packets from UN workers. Some women are afraid to go to distribution points to pick up aid packets because of fear of sexual exploitation and abuse.

The more the girl gives to the distributor, the more aid she will receive. – Adolescent girl from Badama sub-district.

With 13.5 million people in Syria in need of humanitarian assistance, these revelations are deplorable. This report follows hard on the heels of sexual misconduct reports against members of Oxfam operating in Haiti and Chad. In the wake of the recent #Metoo campaign, these stories are becoming less and less surprising.

Yet this is not a recent or an isolated problem. Sex scandals have blighted the international humanitarian aid sector on and off for more than 20 years. In particular, sexual exploitation and abuse has been reported from almost every area in which the UN operates. 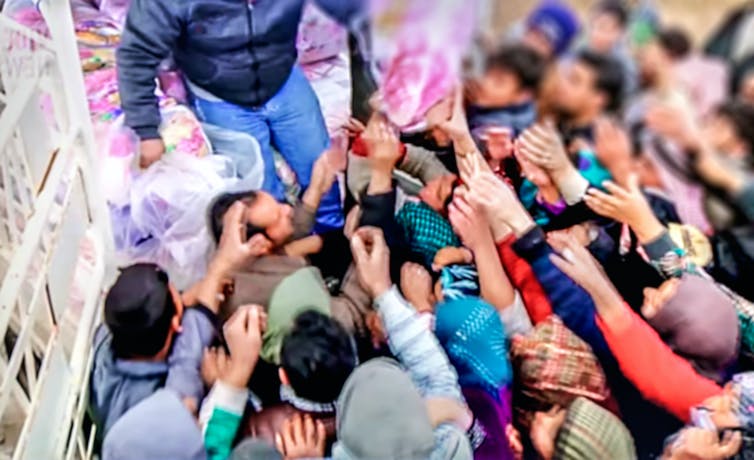 Some peacekeepers and aid workers can come to believe they are the rescuers of the local community they serve. from www.shutterstock.com, CC BY-ND

In 2015, French peacekeepers were accused of forcing children as young as nine to exchange sex for food in the Central African Republic. A later report revealed there were more than 200 victims of sexual abuse in the Central African Republic alone. Allegations involve rape, sexual violence against both adults and children, and exchanging aid for sex.

Read more: Why the UN isn't winning its battle against sexual abuse by peacekeepers

Peacekeepers and humanitarian aid workers are often dispatched to countries that are experiencing the aftermath of conflict, including political instability, severe poverty, displacement, and personal or community trauma. Women in particular have limited access to shelter, food, water, clothing and money.

The arrival of aid workers and peacekeepers can offer hope to those who are suffering the most. They control access to refugee camps and distribution of aid packages filled with items local people need to survive from day to day.

On the other side is the “saviour” mentality, where peacekeepers and aid workers can come to believe they are the rescuers of the local community they serve. The context can also be gendered, particularly in relation to peacekeeping, which is overwhelmingly male. It results in reluctance to enforce zero-tolerance standards.

These circumstances can lead to “othering”, where aid workers perceive the local people as different, inhuman or inherently vulnerable. It is within this context in which survival sex takes place.

Accountability for sexual exploitation and abuse, including survival sex, is woeful. UN peacekeepers and aid workers often have legal immunity from the host country’s criminal system. The most the UN can do, and likewise humanitarian aid providers like Oxfam, is terminate the employment of the person and send them home.

Because of its transactional nature, survival sex can often be disguised as prostitution. Soliciting sex from prostitutes may or may not be criminalised in the home country but even if it is, this does not capture the exploitative nature of survival sex and the particular abuse of power taking place.

Aid, which is already owed to local people, is being exchanged for sex. Survival sex is not the same as prostitution.

Because the perpetrator is likely to be a foreign national, victims have no power to pursue criminal justice against them. International human rights law does not yet require countries to criminalise survival sex and provides limited protection to victims.

Victims also have reduced access to remedies. Neither the UN nor humanitarian aid services provide compensation to victims for any kind of sexual exploitation and abuse. Often the victim is referred to another agency for medical or psycho-social support.

Where UN agencies, like UNICEF, have intervened, they have, on occasion, been accused of being grossly incompetent. The result is a culture of sexual exploitation and abuse which is being committed with impunity.

So what can we, as supporters of international humanitarian aid, do to appropriately respond to such a problem?

One option is to pressure humanitarian aid providers, such as Oxfam, to change the underlying culture that fosters sexual exploitation. Challenge them to put your money aside for compensation and other remedies that victims or survivors need. Ask that they put pressure on world governments to hold perpetrators criminally accountable.

In my research I argue that survival sex is a form of violence against women under international human rights law.

However, there are no current obligations on countries to respond to survival sex. As a result, at the very least, human rights treaty bodies (such as the Committee on the Elimination of Discrimination against Women) should tackle this gap in the law and obligate countries to do something.