While the first movie ended with humanity destroying the Breach - an inter-dimensional portal at the bottom of the Pacific Ocean through which the Kaiju were emerging - we find out that all is not well a decade later.

In Uprising, society has started to rebuild, but many city areas still lie in ruins – and this is where Jake (John Boyega), the son of war hero Stacker Pentecost, thrives.

While Pacific Rim Uprising is definitely action-packed, there is still more to the movie than just giant robots fighting mega monsters. Characters are in parts more fully developed than in the first movie and there’s humour in the form of one liners.

But what of some of the new technologies and Kaiju shown? How plausible are they from a (forgiving) scientific perspective?

The biggest and heaviest creatures to ever walk on land were dinosaurs - with the largest sauropods like Argentinosaurus likely weighing in at more than 50 tonnes (weight estimation is an imperfect science). In the oceans, Blue Whales beat even dinosaurs with maximum weights of potentially up to 200 tonnes. 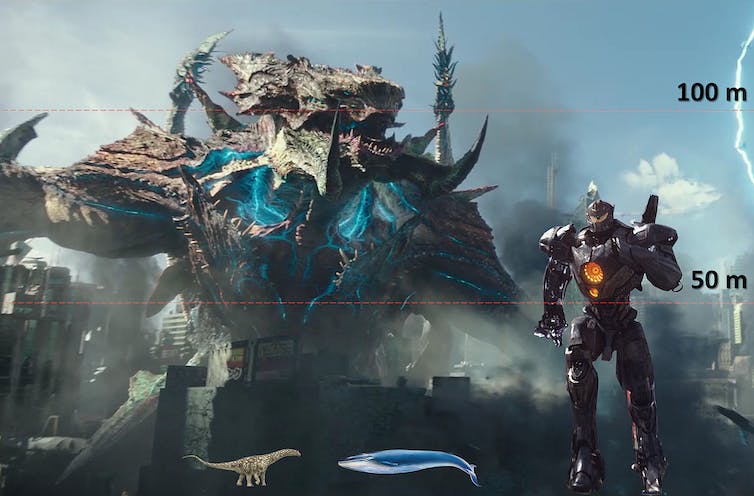 The Jaegers and Kaiju are far bigger than anything that’s come before. Universal Studios/Legendary/Michael Rosskothen/Halina Koktysh/123rf.com/Michael Milford.

But nothing has evolved (that we know of) that comes close to the size of the Kaiju in Pacific Rim. We haven’t built agile humanoid-like systems anywhere near as big as a Jaeger yet either - our only mobile machines that large are ponderous mining vehicles and the Space Shuttle’s Mobile Launcher Platform.

One of the key reasons? The square-cube law. This law captures how the weight and volume of objects change as you make them bigger. 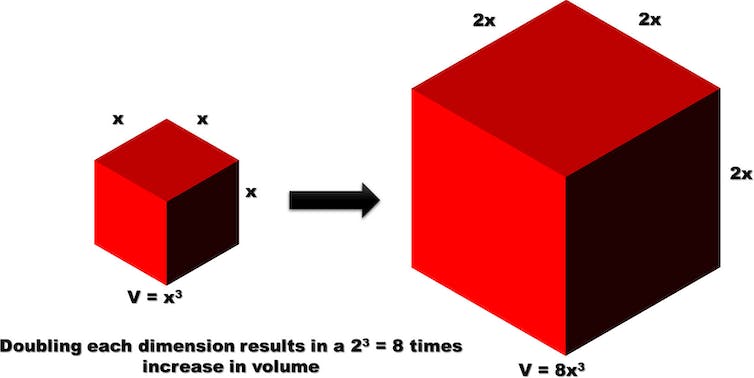 Doubling the size of an object in all three dimensions results in its volume going up by eight times. Michael Milford

If an animal is scaled up in all dimensions by a factor of two, its volume (and mass) goes up by a factor of eight (the cube of two). But the cross-sectional area of its muscles and bones (say the muscle in its legs) only goes up by four times.

This is why large land animals (such as an elephant) generally look very different to small animals (such as a rat). So the depictions of both creature and machine in the movie require a departure from the physics of everything that we’ve seen in our world so far, something we’ve written about before for other monster movies.

This same scaling law also applies to artificial constructs, such as the mechanical Jaegers. To be able to fight and move like they do in the movie, they would need to be made out of incredibly strong materials - perhaps some futuristic application of graphene.

Verdict: Plausible only with futuristic materials science and out of this world biology - just like where the Kaiju come from!

Both movies show Jaegers being carried around by futuristic rotorcraft. But what would it take to actually lift one?

First we need to estimate the weight of a Jaeger. We can get a rough estimate by scaling up the 1.8 metre tall Atlas robot from Boston Dynamics to become an 80 metre tall Jaeger, and assuming that in this future we have access to new lightweight materials that weigh say four times less.

Ignoring details like the lifting efficiency of helicopters with an angled cable, we can see how many current heavy lift helicopters would be required.

To accomplish the feat shown in the movie of only six being required, they’d need to each have a payload capability of about 293 tonnes - which is more than that of the world record lift of 187.6 tonnes achieved in 2009 by the Antonov An-225.

How about rocket launching a Jaeger?

The Jaegers are shown flying in the movie - propelled by some sort of rocket and new advanced rocket fuel based on Kaiju blood. But what if we did not have this new Kaiju-based blood rocket fuel?

Up, up and away. (Universal Studios/Legendary)

Could Elon Musk adapt his Falcon Heavy to do the job?

The Falcon Heavy weighs about 1,420 tonnes at launch - not that much less than a Jaeger, but most of that weight is fuel, and it is a multi-stage rocket that jettisons parts of itself along the way.

But it needs to get all the way to (and stay in) low Earth orbit, requiring a velocity change of more than 9km/s (thanks to the Tsiolkovsky rocket equation).

In Uprising, the Gypsy Avenger Jaeger gains a lot of altitude but doesn’t need to get up to the velocity required to stay in orbit, and hence wouldn’t require as large a fraction of the weight to be fuel.

The Jaeger propulsion system could also potentially be benefiting from advances in rocketry that lead to a greater effective exhaust velocity, further reducing the fraction of weight that would need to be taken up by fuel. Or they could just use nukes.

Verdict: Elon could do it. Probably.

The Jaegers are piloted by humans connected to them via a neural bridge called “The Drift”. In the first movie, Jaegers had two or more pilots, who had to be compatible with a close emotional or family tie - for example two brothers.

Humanity has been investigating new ways to neurally pilot the Jaegers. Universal Studios/Legendary.

In Uprising, there is a focus on starting young, training cadet kids to become pilots.

So how close are we to this in reality? As one of us wrote in early 2017, the technology still has a fair way to go.

But what about the potential appeal of using younger minds and using family members?

Angela: A close, long-term relationship between BMI (Brain Machine Interface) co-pilots would probably improve performance. There are real-life BMI setups where two monkeys using their combined brain activity to control a robotic arm have better control when their brain activity is more correlated.

It’s also been shown that people’s brain activity becomes synchronised when they coordinate to perform joint actions. So two pilots with a long history of coordinating their actions might have more similar patterns of brain activity, and thus have better control over the Jaeger.

So where are we at with Brain Machine Interfaces today?

Angela: BMI technology is pretty impressive these days, but we have to trade off how much control we’d like with how invasive our recording techniques are.

With arrays of electrodes implanted on the brain, we can decode precise gestures, in near real-time. The average person probably isn’t willing to undergo brain surgery just to control a BMI though.

Non-invasive methods are more difficult to decode, but we can usually detect whether you’re thinking of moving your left or right hand within about three seconds, and translate that into an action.

So it seems, if advances in BMI technology were to continue into the future, a brain-controlled Jaeger may just be possible.

While it is hopefully unlikely that giant creatures will emerge from an interdimensional void to battle us, Pacific Rim Uprising previews a range of technologies that are likely to be a big part of humanity’s future.

The concept of humans and machines merging in ever more intimate ways, as in The Drift, is likely as scientists continue to push boundaries by combining artificial and natural intelligence.