I’ve always wondered what happens when pouring a few drops of lemon juice into a cup of tea (no milk added). Why does it lighten the tea’s colour? – Michel, Paris

To answer this question, we need to think about the molecules that give a cup of tea its colour - and how lemon juice affects them.

Read more: What science says about getting the most out of your tea

Tea is typically made from the plant Camellia sinensis.

Tea has been used for a variety of health conditions in China since ancient times, and it took time (around 1,000 years) to change from being seen as a medicine to today’s “every day drink”. Some of the health benefits of tea are now receiving renewed attention.

The colour of tea

Today, tea varieties are heavily dependent on the processing techniques after harvest. These include oxidation and fermentation of tea leaves, which change their colour and flavour. Use of these manufacturing techniques provides six distinctive categories of tea, based primarily on colour: green, yellow, dark, white, oolong, and black.

Black tea and green tea are often (but not always) obtained from the same plant but their chemical makeup is vastly different.

The leaves used for green tea production are heated either by steam, pan frying, roasting or baking immediately after harvesting. This process stops chemical reactions driven by the enzyme polyphenol oxidase that would otherwise oxidise coloured chemicals such as polyphenols (catechins).

This results in tea keeping its familiar yellow-green colour. Once the leaves are “fixed” they are soft – and are then rolled and dried to become the product we see on supermarket shelves. 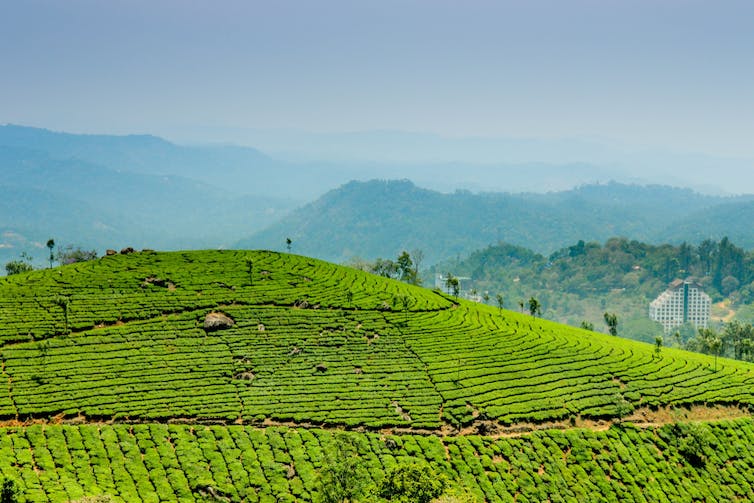 Tea plantation in India. from www.shutterstock.com

The production of black tea depends on the enzymes being allowed to oxidise the catechins completely to form new chemicals – these are pigments (theaflavin and thearubigin) that provide the characteristic dark colour.

Although thearubigins are less common in your black teabag (around 10-20% of the dry weight), they are more soluble – so when you make a brew these compounds can account for up to 60% of the solids suspended in the solution.

In broad terms, all other colour categories of tea fit between green and black. So categorisation of teas based simply on colour mostly depends on the type and amounts of these compounds found in the brewed product.

Read more: What is kombucha and how do the health claims stack up?

What happens when lemon juice is added?

The thearubigins in brewed tea are highly coloured (red-brown) molecules that change according to the acidity of the liquid used.

If the water used for the tea infusion is relatively alkaline (for example, due to limescale found in “hard” water), the colour of the tea will be darker and deeper.

However, once an acid such as a slice of lemon or lemon juice is added, tea changes colour because of an increase in acidity (reduction in pH) of the beverage itself. Lemon juice is quite strong as a food acid – a few drops are enough to alter the theaurbigins, resulting in a dramatic change in colour. Interestingly, theaflavins are not that affected by the change in acidity, and still retain their normal dark red colour.

In a case of green tea, the addition of lemon juice will also affect the colour through a similar process. This results in a much paler beverage - beyond the level that would occur just by initial tea suspension.

The beneficial health effects of tea are linked to its total polyphenol content, mainly the catechins. However, one of the problems with these compounds is that they are rather unstable. When alkaline (hard) water is used, they break down relatively quickly (within a few minutes of brewing).

Even if they do remain in solution, the absorption of these compounds is low (less than 2%), and can also be inhibited by the food consumed with your cuppa.

Increasing the acidity of drinks has been shown to improve the stability of catechins in beverages. This is one of the main reasons why drinks such as iced teas tend to be quite acidic. However, to make them more palatable, relatively high levels of sweeteners (mainly sugars) are also added.

So, all up, although the key compounds in your cup of tea tend to degrade quickly, the addition of lemon does protect them temporarily from this breakdown. But it’s not a huge effect. Adding lemon can enhance the flavour and enjoyment of tea, and change its colour, but its best not to expect any extra boosts to your health.