Most people’s experience of World Heritage is now a digital one. Whether it’s on social media, an official website, Wikipedia or a simple Google search, this shift in “visitation” means many people who engage with World Heritage will never physically travel to the actual site.

The UNESCO World Heritage Committee is the top-tier organisation for the protection of natural and cultural heritage. To date, 1,073 properties have been listed for their significance to all of mankind.

The list includes many well-known ancient monuments like the Pyramids of Giza, and the Parthenon, and natural sites like Uluru Kata-Tjuta. Less frequently recognised are industrial sites like the Rideau Canal and contemporary works of architecture such as the Sydney Opera House.

The Sydney Opera House was listed in 2007, not only for its architectural and technical achievements as a masterpiece of modernism, but curiously also for its status as a world-famous iconic building. Digital visits to the Sydney Opera House now outnumber in-person visits by 16 to 1. 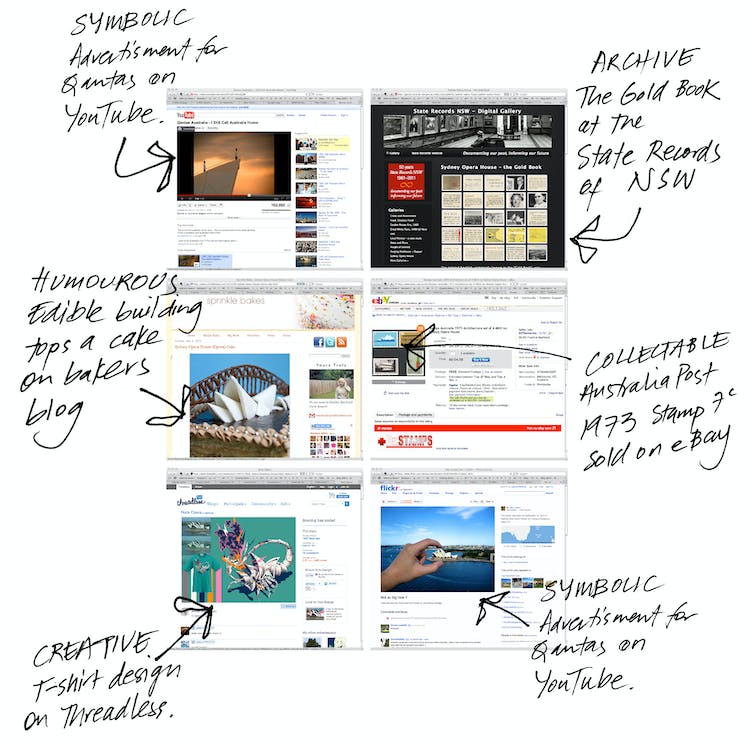 By 2019, half of the world’s people will have access to the internet. For most, the internet is essential to everyday life. The impact of this exponential growth of the internet on people’s engagement with World Heritage has been overlooked. Yet it has the potential to tell us about the close connections people have with some of our most esteemed places.

Managing organisations are beginning to see the social and economic value of digital audiences. In 2013 the Sydney Opera House reported a digital reach of 128 million. Deloitte estimated this to be worth A$59 million. It’s the result of a media strategy to develop digital content, social media engagement, and participatory online events. 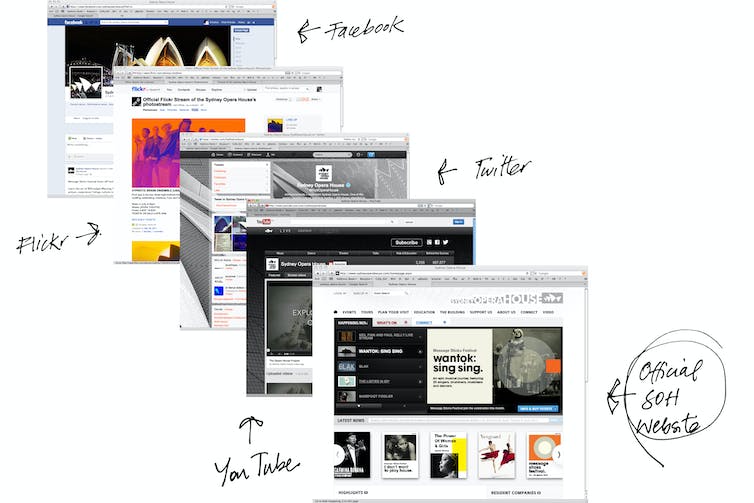 But this is not the whole story. What about all the things people do online outside of the Sydney Opera House’s formal social media channels?

We know that not everyone actively posts pictures, edits Wikipedia, or writes a blog. The 1% rule describes online participation. For every person who actively contributes content, nine others will like it. Another 90 will simply view the originally posted content.

Adding up the number of followers across the official Sydney Opera House social media accounts (Facebook, Twitter, Instagram and YouTube) gives us an immediate audience of about 1.67 million. Using the 1% rule, this extrapolates to 167 million, which is similar to Deloitte’s 2013 figure. This is almost seven times Australia’s population and equivalent to 2% of the world population. World Heritage has never been so visible!

But numbers are not the only story here. While impressive, they don’t tell us how people feel connected with such places.

What can the internet tell us?

My recent research investigates online forms of participation with the Sydney Opera House. Combining digital ethnography and data analytics enables us to better understand the social value of architectural icons and the implications for World Heritage.

Popular depictions of the Sydney Opera House posted online include photographs, cakes, artworks, children’s books, Lego, other buildings and hats. By examining these we can understand people’s values and how they engage with this World Heritage site in everyday activities and in the process reshape the narratives being told. 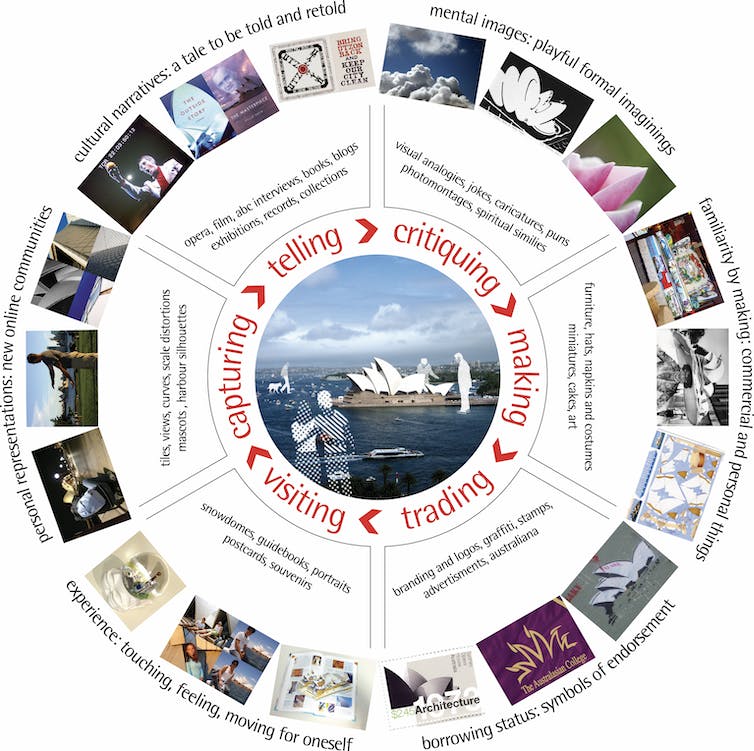 Six ways in which people engage with the Sydney Opera House revealed through their online participation. Author provided

Close examination of online posts and activities reveals communities of people passionate about the Sydney Opera House. Participatory platforms such as Wikipedia and Flickr are filled with people dedicated to telling a comprehensive historically and visually accurate story about this place. But people are also discerning; they highlight that a single building cannot fully represent their city.

Brands and organisations also reference the form of the Sydney Opera House in their logo types to gain cultural capital. Examples include the Sydney Swans, Sydney Mardi Gras and the Sydney 2000 Olympics. The varied references to this place in many different contexts show its power to create a social connection that transcends borders.

What are the implications for World Heritage?

A World Heritage listing brings an increase in visibility and visits. A listed site gains international recognition and cultural status as well as economic benefits through tourism.

In the decade since the Sydney Opera House became a World Heritage site, annual visitors have doubled from 4 million to 8.2 million, audiences have grown from 1.2 to 1.5 million, and tours of the building have increased by a third.

But World Heritage status comes with a need to preserve and conserve the listed site. For the Sydney Opera House, this means maintaining its iconic status.

My research demonstrates how people’s participation through popular culture helps to maintain this iconic status. Through posting pictures on Instagram, or making “opera-house-shaped things” and sharing them online, people integrate this icon into their daily lives. But this also challenges the building’s copyright, which underpins corporate partnerships that provide funding in exchange for affiliation.

Further, tourism can threaten the conservation of World Heritage properties. Too many visitors and excessive development puts pressure on local communities, management and facilities.

International visibility can also make properties targets of political destruction. This raises questions about how World Heritage status is given and its implications for conservation in an increasingly digitally mediated world.

The Sydney Opera House always held the promise of transformation of Sydney. Now global online communities are transforming it. In our inevitable digital future, what role people will play in ascribing and maintaining World Heritage status?