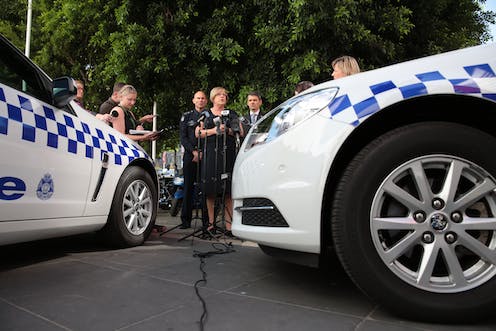 Professional policing is one of the great inventions of modernity. Police are there to help people feel safe. A police force is therefore a vital institution in the realisation of the fundamental democratic values of freedom, security, safety and justice. But, from time to time, incidents occur that cause the public to challenge these fundamental assumptions.

In light of the disturbing footage that has emerged this week from CCTV cameras showing Victoria Police officers engaging in violent interactions with members of the public (one, a mentally ill pensioner who had refused to comply with a request regarding his welfare; the other, a robber armed with a pair of scissors who was being apprehended at the scene), questions arise again about the police use of force and accountability mechanisms that are designed to prevent incidents such as these.

First, we need to acknowledge that police in Australia are generally held in high regard by the public. The Productivity Commission reported in 2016-17 that, nationally, 73.4% of the adult Australian population were “satisfied” or “very satisfied” with the services provided by police.

Read more: Body-worn cameras are not a panacea for poor policing

But this confidence is significantly diminished when footage emerges of police using what appears to be excessive force, and even more so when their notes of a particular incident do not match the evidence provided by the cameras.

All this may change if body-worn cameras (BWCs) are made compulsory for all frontline officers. Victoria Police is about to move in this direction.

Will this revolutionise the way police behave, and the way the public engages with them?

In 2015, former New South Wales Police commissioner Andrew Scipione thought only good could come of such an initiative. He argued that BWCs would keep police and the people they deal with accountable.

He is not alone in thinking this way. Research in the US has found that police commands generally are of the view that their officers will be more reluctant to use excessive force in encounters with the public if they are wearing BWCs.

A study in Florida found that the public, too, thinks highly of BWCs, especially in their ability to place a check on the police use of force, and to enhance the collection of evidence.

Over the last decade, most jurisdictions in Australia have trialled BWCs with frontline police officers. The results have been largely positive: the NSW trial, for example, was deemed “a great success”.

But the general consensus among academics who have studied the phenomenon is that BWCs are not the key to reducing police use of excessive force. A very useful analysis of the international evidence concluded that the presence of BWCs had no overall effect on police use of force.

Indeed, when officers had the power to choose to turn cameras off and on, use of force rates were higher. Also, researchers reported higher rates of assaults on police presenting with BWCs, which suggests that their presence may actually provoke aggressive conduct from the public rather than calm it down.

But these same researchers also concluded, in a related study, that BWCs can reduce police use of force when an officer’s discretion to turn cameras on or off is minimised. They write:

BWCs ought to be switched on and the recording announced to suspects at early stages of police–public interactions.

While the risks and stresses placed on police make criticism of them often appear churlish, the clear implication of the many inquiries into the conduct of police is that they must be closely and constantly monitored. The delegation of authority to police to assess their own use of force is no longer something that can be applied solely on trust.

Read more: Charges in Justine Damond case a reminder of the dangers of a 'warrior cop' mentality

So will the drive to equip Australian frontline police officers with compulsory BWCs improve policing? Probably. For a start, gathering evidence will be considerably speedier and more accurate in most circumstances.

The cameras will need to be operational in all interactions and the rules concerning turning them on and off will need to be clear and well-regulated. Recall, for example, that the camera worn by American police officer Mohamed Noor at the time of the shooting of Australian woman Justine Damond had not been activated.

But this is only the start. What also must be determined, among other things, are the protocols associated with the privacy of those filmed, and with accessing and storing the recorded material, ensuring that it is tamper-proof, and warranting that it will be available when requested under Freedom of Information legislation.

And it should not be forgotten that true police accountability is located in the way operational codes are observed, the practices of the relevant internal and external review bodies, and in the culture of every police organisation.

The new visibility provided by BWCs will add a layer of transparency to police activities. But this alone will not be, and cannot be, the driver of greater accountability.