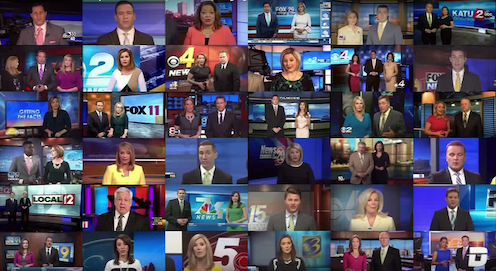 The term “fake news” has gained prominence in recent years thanks to US President Donald Trump’s attacks against the media during the 2016 US election. In 2017, it was one of Collins Dictionary’s 2017 words of the year.

Unsurprisingly, politicians use the fake news label to discredit media stories that portray them in a negative light. And it’s back in the headlines after the largest television company in the US – Sinclair Broadcasting Group – issued a coordinated campaign of scripted warnings about fake news in terms that echo Trump’s sentiments:

The sharing of biased and false news has become all too common on social media … Some members of the media use their platforms to push their own personal bias … This is extremely dangerous to our democracy.

Trump tweeted in support of Sinclair’s message, slamming the mainstream media in the process.

Meanwhile, a new study suggests that actual fake news may have helped Trump to secure the election. Ohio State University researchers found a high statistical association between belief in fake news items and voting in 2016.

Whatever the impact of fake news on election outcomes, some governments are introducing legislation to control the problem. But these laws are more likely to limit free speech, chill the real news, and create unintended consequences.

Public trust in media is low

Trump and other politicians’ attacks mirror widely held suspicions about the media. A recent poll by Monmouth University showed that more than 77% of Americans believed that mainstream media reports fake news. One in three believed this happened regularly, whereas 46% thought it only happened occasionally.

Fake news was defined broadly: 25% thought it referred to wrong facts, whereas 65% believed it also covered editorial decisions and news coverage. 87% of Americans thought interest groups plant fake news on platforms such as Facebook and YouTube. Of concern, 42% believed media reported fake news to push an agenda, and 35% trusted Trump more than CNN.

Australians also have low confidence in the media. According to the 2018 Edelman Trust Barometer, just 32% trust the media – the second lowest score out of the 28 countries surveyed.

The congruence of public distrust and politicians’ self-interest has reached an obvious denouement: legislation.

The most egregious of these laws was just passed by the Malaysian Parliament’s Lower House. The Anti-Fake News Act 2018, which imposes jail terms of up to six years, will become an Act after Senate approval. The law defines fake news broadly to include:

…any news, information, data and reports, which is or are wholly or partly false, whether in the form of features, visuals or audio recordings or in any other form capable of suggesting words or ideas.

The law is particularly dangerous because it has extra-territorial application – foreigners can be dealt with “as if the offence was committed” within Malaysia. In other words, it is not just Malaysian journalists who could be locked up – foreign media can also be locked up if Malaysian law enforcement can reach them.

Read more: Why are Sinclair's scripted news segments such a big deal?

Malaysia is not an isolated instance. The Philippines is considering a similar law. The Irish Parliament is also considering a bill to criminalise the use of bots on social media platforms to promote fake news – such as those thought to have been used by Russia to influence the US election.

India proposed a law that would suspend the accreditation of journalists for fake news, but retracted the order within a day due to a backlash.

It is unclear if the Malaysian law – and other national variants – is masquerading as an attempt to promote real news when it is actually an attempt at censorship by stealth. Regardless, even assuming good intentions, anti fake news laws are incapable of tackling the menace.

Fake news is a slippery concept. Who decides what is fake? And how do we manage the distinction between facts and opinion? There is no bright-line definition that would provide clarity, and each item has to be assessed on its own. Moreover, not all fake news is harmful – a precondition for regulation.

Regulation would turn judges into fact-checkers for potentially millions of news items or social media posts – an impossible task even without crowded dockets. Replacing judges with bureaucrats might improve efficiency marginally, but would generate a censorship state.

Buttressed with criminal penalties, these laws will chill free speech and substantially diminish the marketplace for ideas. Media outlets will be overly cautious with negative consequences for transparency and accountability. In addition, the laws are unlikely to advance the cause of real news – they have no connection to the incentives for providing truthful information.

The current system is sufficient

Read more: Why Facebook is the reason fake news is here to stay

Firstly, it is difficult to establish intention to fabricate falsehoods and harm, and the causal link between the two. And giving the state tools to police speech is dangerous, with fear alone generating self-censorship. Also, judges and bureaucrats are not experts at separating fake from real news – public debate in the marketplace of ideas is more efficient. Finally, modern news does not stop at geographic boundaries, and national law cannot solve a transnational problem.

This does not mean that social media platforms should be free to spread falsehoods and compromise elections. Some options for preventing the proliferation of fake news that could crowd out real news include accreditation to distinguish legitimate news outlets, liability for search engines and distributors where actual harm and intent to fabricate can be established in private litigation, and accessible remedies for defamation. However, such regulation goes well beyond the scope of current anti fake news laws.