AFL players are reportedly being treated with injections of the drug pentosan polysulphate sodium (PPS) for knee and bone pain.

While PPS is approved for use in Australia in oral capsule form to treat bladder inflammation, it is not yet approved as an injection for joint problems.

Up to 50 current and former AFL players are reported to have been given PPS over the past few months, under the Therapeutic Goods Administration’s special access scheme.

PPS is not prohibited by the Australian Sports Anti-Doping Authority (ASADA). The drug is neither an anabolic steroid nor an opioid-based pain reliever so is not considered to enhance performance.

Read more: After the Essendon saga, any reform to anti-doping regimes must give athletes a greater say

In Australia, PPS is available only by prescription, under the brand name Elmiron, for the treatment of interstitial cystitis, a type of chronic inflammation of the bladder wall. It is not commonly used, with only 400 scripts filled nationwide in 2011.

The drug is a semi-synthetic chemical that works by passing through the kidneys into urine, where it is then able to coat the inner walls of the bladder. This prevents microorganisms attaching to the bladder and causing infections.

When taken in capsule form at a dose of 100 mg, the drug is effective after six to eight weeks of treatment. 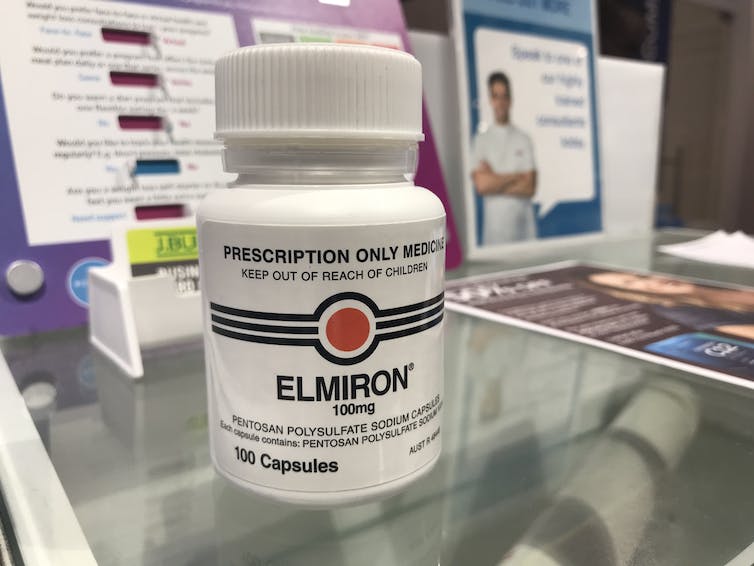 PPS is available in Australia with a prescription under the brand name Elmiron. Author provided

Because it is also similar to heparin, PPS also works an anti-blood clotting agent by inhibiting the action of an enzyme called activated factor Xa, which plays a key role in helping blood cells stick together in clotting.

Common side effects of PPS include swelling, headache, dizziness, nausea, indigestion or diarrhoea.

The Australian pharmaceutical company Paradigm Biopharma is looking to repurpose PPS as a treatment for pain in people with osteoarthritis of the knee and lesions in the subchondral bone – the layer of bone just below the cartilage in joints which acts as a so-called “shock-absorber”.

The company is currently conducting a randomised, placebo-controlled clinical trial in Australia using an injectable form of the drug. Evidence of the benefit of PPS in osteoarthritis of the knee has been known from an early trial which gave the drug as an intramuscular injection for a month.

It’s not clear how PPS reduces joint pain, but Professor Jegan Krishnan, an orthopaedic surgeon at Flinders University, suggests that the drug has anti-inflammatory effects and seems to address the bone marrow lesions. By controlling the lesions, the drug prevents the pain.

The injectable form of PPS is not registered in Australia, or approved for sale. It can only be used through the TGA’s special access scheme, which grants permission for use of unapproved drugs when other treatment options have been exhausted.

Paradigm Biopharma is not the only company looking to repurpose the drug. Clinical trials are also being conducted overseas by other companies to examine whether PPS is useful as a treatment for psychotic disorders and prostate inflammation.

Arthritis and joint pain are common injuries among elite sports people. These injuries are particularly prevalent in Aussie rules players because of the frequent jumping, running and tackling that the players undergo on a weekly basis.

As such, AFL players are one group of sportspeople who are likely to benefit from PPS injections.

PPS is administered as an injection to the players twice a week for a period of six weeks and results have indicated that PPS works well to control their knee pain. All players reportedly experienced significant drops in their pain levels.

Read more: Close case set to present a legal headache for the AFL

While these results are promising, any data obtained outside of the clinical trial must be treated with caution. Before routine prescribing of PPS for people with knee pain and bone lesions, the clinical trial must show the drug is safe in its injectable form and that any reduction is pain is at least as good as current treatments.