While rainfall conditions were generally good across Australia in 2017, record-breaking temperatures stressed our ecosystems on land and sea, according to our annual environmental scorecard. Unfortunately, it looks like those records will be broken again next year – and again in the years after that. 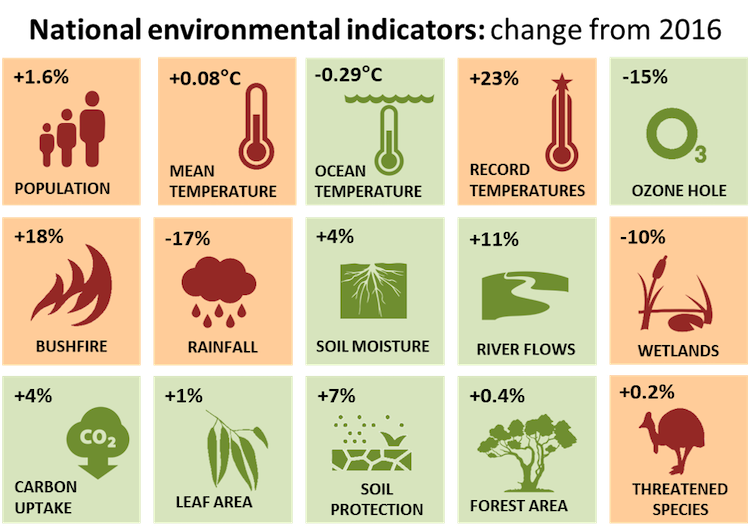 Indicators of Australia’s environment in 2017 compared to the previous year. Similar to national economic indicators they provide a summary, but also hide regional variations, complex interactions and long-term context.

Our terrestrial environment has done relatively well in 2017, mainly thanks to good rainfall and leftover soil moisture from the year before. However, such a short summary for a country the size of a continent is bound to hide large regional differences. 2017 was no exception.

Western Australia and the Northern Territory received good rains, with vegetation growth, river flows and wetland area all coming in above average. By contrast, Queensland and particularly New South Wales saw a reversal of the previous year’s gains. 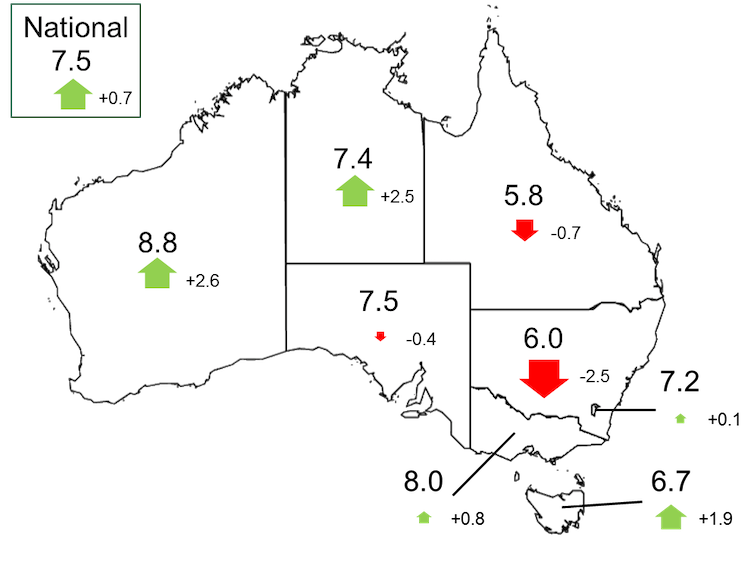 Environmental Condition Score in 2017 by state and territory. The large number is the score for 2017, the smaller number the change from the previous year. Based on data on www.ausenv.online

Climate change is here to stay

There was good news and bad news for our atmosphere in 2017. Humanity’s collective action to fix the hole in the ozone layer is proving successful. The hole is the smallest it has been since 1988.

On the other hand, global carbon dioxide concentrations rose again, by 0.5%. While this was less than in the previous two years, it was still far from enough to stop accelerating global warming.

The world’s oceans were the hottest they’ve been since measurements started. Sea levels rose by 6.4mm, and sea ice cover at the poles reached another record low. In short, our planet is warming.

Last year broke the most high-temperature records since 2009, which was at the height of the Millennium Drought – the worst drought since European settlement.

Queensland and northern New South Wales were affected most, with summer heatwaves in February and a second round of bleaching on the Great Barrier Reef. In March, Cyclone Debbie rammed into the Great Barrier Reef and the Queensland coast, bringing torrential rains and widespread flooding in its wake. The cyclone helped cool down the shallow reef waters but also ravaged delicate corals in its path, stirred up sediment and caused rivers to flush more damaging sediment and nutrients out to sea.

Winter was dry and the warmest on record and September also set heat records. Experts predicted the risk of a bad summer fire season, which did not happen, thanks to a combination of mild weather and well-timed rainfall. Nationally though, the number and size of fires were still above average, mainly due to good growing conditions in WA’s arid rangelands.

Perhaps the most recognisable impact on our terrestrial ecosystems is the disappearance of mature vegetation after fire, drought or land clearing. We should have good data on such important changes, but we don’t.

However, this increase is the difference between much larger gains and losses. Most of the forest increases occurred in dry woodlands in NSW and Queensland, most likely due to regrowth after a relatively wet 2016.

Unfortunately, these numbers do not paint a clear picture of the state of our ecosystems. Far more is lost from removing a hectare of dense native forest than is gained from a hectare of regrowth or new planting.

The current national mapping is insufficient to make these distinctions. We now have the satellite mapping data and technologies to do a better job. This should be a priority if we are to understand how our environment is changing and meet our international commitments. 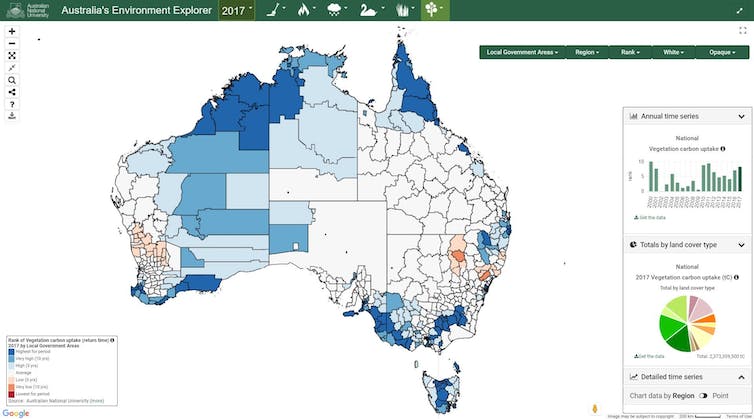 Australia’s Environment Explorer (http://www.ausenv.online) provides summaries of environmental condition by location or region. This example shows local government areas where vegetation cover in 2017 was above average (blue colours) or below average (red colours).

Slow changes can still be deadly

Temperatures in excess of 42℃ can kill large numbers of flying foxes, and this happened again in 2017. We know this because they roost together in their thousands and we can count the corpses under the trees.

What heat stress does to other species is far less known. There is evidence of koalas and some large birds suffering from hot days, but we barely understand how increasing temperatures may be chipping away at the cornerstones of our ecosystems: plants, bacteria, fungi, insects and other uncharismatic creatures.

At sea, we can see the impact of high sea temperatures through coral bleaching, visible even from space. Sea surface temperatures also reached record highs off the coast of southeast Australia for the second year in a row.

On top of the steady rise of ocean temperature, sea level and acidity, the East Australian Current is strengthening and reaching ever further into the Tasman Sea. The current carries tropical reef species to Sydney and yellowtail kingfish to Tasmania. The warmer water also ravages the remaining kelp forests and stresses Tasmania’s abalone, oyster and salmon industries.

The future is already here

Last year made it abundantly clear that climate change is here now, and here to stay. We will be seeing new heat records for years to come and, sadly, some species and ecosystems are unlikely to survive the onslaught.

But there are still things we can do to limit the damage. Reducing carbon emissions will still help limit future warming. Avoiding the destruction of native ecosystems should be a no-brainer.

That isn’t just about clearing farm land, which is often singled out. Australia’s population has grown by 31% since 2000. We’re adding the equivalent of a city the size of Canberra every year.

Each of us uses space, infrastructure and resources and produces waste at levels far above the global average. If we want our land and oceans to support our privileged lifestyle in future, we have to learn to tread more lightly, and learn it fast.