With each new version of the widely-used manual of mental disorders, the number of mental health conditions increases. The latest version (DSM-5) lists around 300 disorders. To complicate things, many share common features, such as depression and anxiety.

The manual is a useful guide for doctors and researchers, but making a diagnosis is not a precise science. So if the “experts” are still debating what’s what when it comes to categorising disorders, it’s not surprising misconceptions abound in the community about certain mental health conditions.

We learn about mental health conditions in a number of ways. Either we know someone who has experienced it, we’ve experienced it ourselves, read about it or seen something on TV. Movies and TV series commonly portray people with mental illness as dangerous, scary and unpredictable. The most popular (mis)representations are of characters with multiple personalities, personality disorders, schizophrenia and bipolar disorder.

Read more: The emotion centre is the oldest part of the human brain: why is mood so important?

A personality disorder is a long-term way of thinking, feeling and behaving that deviates from the expectations of culture. Whereas in dissociative identity disorder, at least two alternate personalities (alters) routinely take control of the individual’s behaviour. The individual is usually unable to remember what happened when an alter takes over: there are noticeble gaps in their memory, which can be extremely distressing.

Read more: Dissociative identity disorder exists and is the result of childhood trauma

The popular TV series “The United States of Tara” actually does a pretty good job of portraying dissociative identity disorder. The main character has a series of alters and experiences recurrent gaps in her memory.

While it used to be considered rare, dissociative identity disorder is estimated to affect 1% of the general population, and is typically related to early trauma (such as childhood abuse). People commonly confuse dissociative identity disorder with schizophrenia. Unlike schizophrenia, the individual is not imagining external voices or experiencing visual hallucinations: one personality literally “checks out” and another appears in their place. 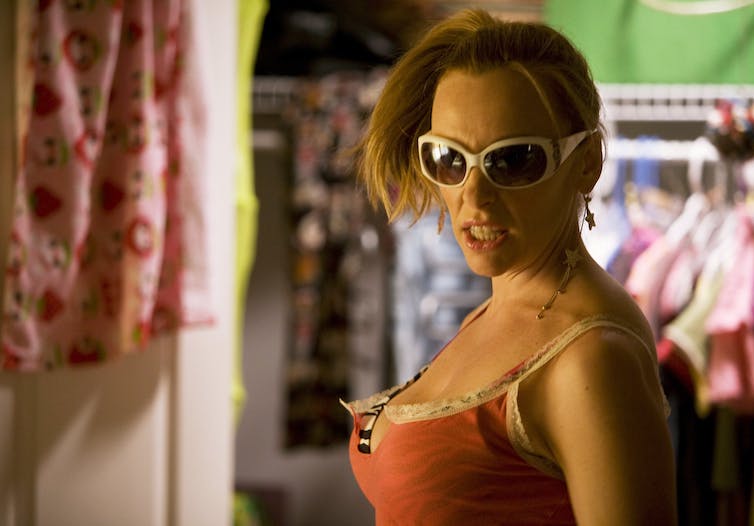 United States of Tara is one media portrayal of a mental disorder that actually does OK. AAP/ABC TV

Borderline personality disorder is often misconstrued. People with this condition are often portrayed as manipulative, destructive and violent. In reality, these behaviours are driven by emotional pain: the person has never learned to ask effectively for what they need or want.

It is also often assumed “borderline” means the person almost has a personality disorder. The term “borderline” here creates some confusion. First introduced in the United States in 1938, the term was used by psychiatrists to describe patients who were thought to be on the “border” between diagnoses (mostly psychosis and neurosis). The term “borderline” has stuck in the diagnosis, but there is now a much better understanding of the causes, symptoms and treatment.

Read more: Borderline personality disorder is a hurtful label for real suffering – time we changed it

Those with borderline personality disorder have difficulties regulating their emotions. This contributes to angry outbursts, anxiety and depression, and relationships fraught with difficulties. It’s also commonly associated with trauma (such as childhood abuse or neglect).

Many actions of a person with borderline personality disorder (such as self-harm and overdose) are done out of desperation in an attempt to manage difficult and intense emotions.

Bipolar disorder is characterised by extreme mood swings – from severe lows (depression) to periods of high activity, energy and euphoria. The different mood states can seem like a personality change, but a return to the “usual self” occurs once mood stabilises.

Bipolar mood episodes last longer (four days or longer for “ups” and two weeks or longer for “downs”), with periods of wellness in between, and are less likely to be triggered by external events. And bipolar disorder is more likely to run in families, disrupt sleep patterns, and psychotic symptoms (delusions, hallucinations) can occur during mood episodes.

We all have ups and downs, but bipolar disorder is much more than that with extreme, recurrent mood episodes that are not only distressing, but have a significant long-term impact on key areas of a persons’s life. Positively, with the right treatment, good quality of life is entirely possible despite ongoing symptoms.

Schizophrenia, meaning “split mind” in Greek, is often confused with dissociative identity disorder. However, the “split” refers not to multiple personalities, but to a “split” from reality. People with schizophrenia may find it difficult to discern whether their perceptions, thoughts, and emotions are based in reality or not.

Hearing voices (auditory hallucinations) is a common symptom, along with seeing, smelling, feeling, or tasting things others can’t. Unusual beliefs (delusions), including some that cannot possibly be true (such as a belief that one has special powers) are also common. So too is disordered thinking, where the person jumps from one topic to another at random, or makes strange associations to things that don’t make sense. They may also exhibit bizarre behaviour including socially inappropriate outbursts or wearing odd clothing that is inappropriate to the circumstances.

Other symptoms of schizophrenia look a lot like depression, such as an inability to experience pleasure, social withdrawal and low motivation. Depressive symptoms are also present in schizophrenia, but are slightly different in that emotion is diminished altogether, rather than a depressed mood per se.

Read more: Either mad and bad or Jekyll and Hyde: media portrayals of schizophrenia

Unlike physical conditions, we don’t have a biological test that can magically tell us what mental condition we’re dealing with. Mental health practitioners are carefully trained to observe symptom patterns: the right diagnosis guides the appropriate treatment.

Mental health conditions are serious – whether disorders of personality, mood or somewhere in between. Improved understanding and balanced representation of these conditions is needed to shift stigmas and misconceptions in the community.