This article contains mild spoilers for the first two episodes of The Handmaid’s Tale season two.

The final episode of the first season of The Handmaid’s Tale ended with June Osborne, aka Offred, (Elisabeth Moss) being taken away by the Eyes - the Gilead police force/secret service. She was uncertain of her fate but buoyant, following the handmaids’ refusal to stone one of their own to death, and hopeful, given the whispered reassurances of her lover, Nick (Max Minghella).

In Margaret Atwood’s 1986 novel of the same name, Offred’s narrative ends at this point. In the Historical Notes section that closes the novel, readers learn that Offred remained free long enough to record her story on tapes discovered almost 200 years later. These tapes are the subject of a session of the Twelfth Symposium on Gileadean Studies, which reveals that Gilead was long ago overthrown, though whether Offred herself escaped to Canada is unknown.

Season Two of Hulu/MGM’s television adaptation of The Handmaid’s Tale promises to answer these questions. The first episode opens with June gazing hopefully at the sunlight filtering into the back of the Eyes’ van. However, when the grill through which the sun shines is abruptly slammed shut, June is plunged into darkness, foreshadowing the most harrowing scene in the series to date.

Despite moving on from the events of Atwood’s novel, this second season continues with the book’s central themes, with a focus on female communities, resistance to tyranny, and freedom.

June is forced to interrogate the idea of freedom, even as she tries desperately to escape. Early in the first episode, Aunt Lydia, a fanatical woman responsible for training and punishing the handmaids, challenges them to accept their new lives by comparing “freedom to” with “freedom from”. In a speech adapted from the novel, Lydia explains that although women in the pre-Gilead United States enjoyed the freedom to do many things - work, own property, have sex for pleasure – they were always at risk of harassment or worse by men.

In Gilead, by contrast, she claims that women enjoy freedom from this kind of predatory behaviour, as any man assaulting a handmaid would be subject to the most severe punishment. This, of course, overlooks the monthly rape handmaids are forced to endure, and the brutal physical and psychological torture meted out to any handmaid who refuses to display the utmost humility and obedience.

June refuses to accept Aunt Lydia’s sermonising. When presented with the opportunity to escape, she seizes it without hesitation. Setting fire to her handmaid habit, June reclaims the identity that Gilead has sought to strip from her: “My name is June Osborne … I am free”. 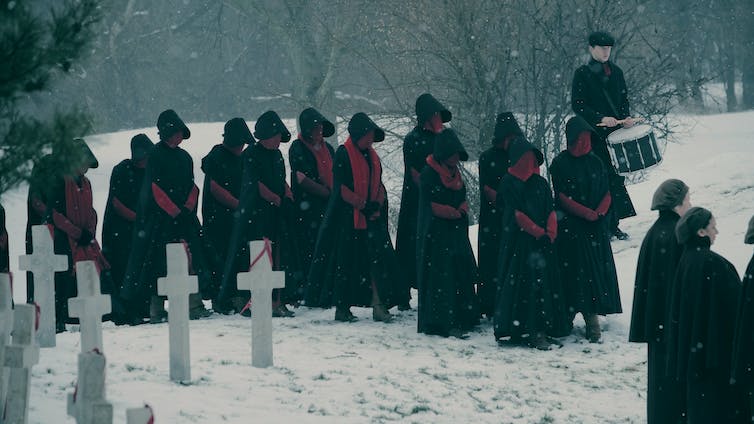 By contrast, readers of Atwood’s novel never discovered Offred’s real name. Her resistance was less overt than the protagonist of the television series, and more obviously troubled by doubts, although her determination to tell her story in defiance of a society that sought to render women voiceless was extremely courageous. Atwood was heavily involved in Season One of the TV adaptation as a producer and writer, but only continued as a consultant in Season Two, with the show’s creators taking her characters in new directions.

Although much more openly defiant than the Atwood character on which she is based, the June of the second season is also beset by doubt, fed by Aunt Lydia’s claim that the handmaids’ resistance is merely “theatrics” and a “waste of energy”. As she is smuggled from place to place, June wonders, “Is this what freedom looks like?” She fears that even if she does make it to Canada, she may never escape the “Gilead within”.

Still, June refuses to succumb to despair, even when forced to hide in an abandoned building scarred with evidence of past violence, unsure when she will be able to leave. She and Nick make passionate love; as in the novel, their sexual relationship is an affirmation of life and love, an act of resistance to a violent society that would deny female sexual desire. 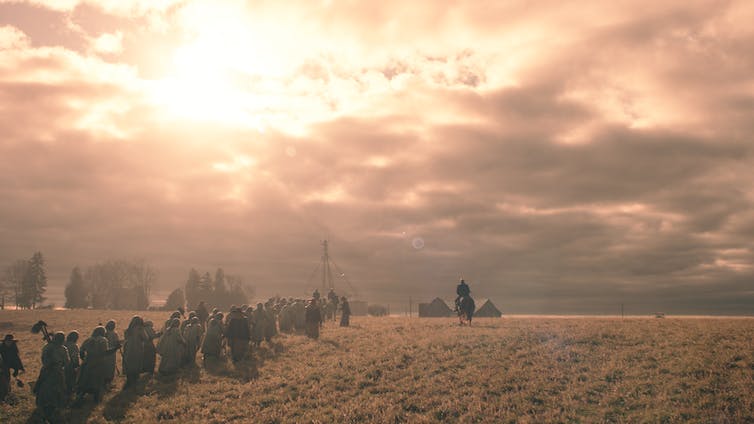 Handmaids in the colonies, where Ofglen is sent. SBS

June is isolated from other handmaids following her escape, but the second season picks up the novel’s theme of female community through the storyline of Emily (previously Ofglen), played by Alexis Bledel. She has been sent to the Colonies to clean up radioactive waste with other “Unwomen” after killing a Gileadean guard.

Despite being sentenced to slow deaths by radiation poisoning, the women continue to care for and support each other; Emily draws on her medical knowledge to ease the suffering of the afflicted. Nevertheless, when the opportunity arises for violent retribution against those she holds responsible for the handmaids’ suffering, she shows no mercy.

In Season Two, we also see a flashback to Emily’s pre-Gilead life as a university lecturer and lesbian wife and mother, moving further away from the novel’s singular focus on Offred. Even in the first season, Oflgen’s character was developed in much greater depth than was possible in the novel, positioning her as a key figure of resistance.

The flashbacks to both her and June’s former lives explain how Gilead came about, and encourage viewers to reflect on similar problematic tendencies in our own time. This device, drawn from Atwood’s novel, is perhaps what made Season One of The Handmaid’s Tale such a phenomenal success, with women donning handmaid outfits (in the 2018 US Women’s March, for example) to protest threats to women’s rights and freedoms.

Season Two promises to continue to disturb and inspire, as does Atwood’s novel, more than 30 years on. Early reviews have been mixed. But the first two episodes (which I was able to view) at least remain true to the themes of Atwood’s novel while speaking to a new generation of women in our #metoo moment.