In early March, the ABC issued a press release announcing that the “multi-award-winning Australian drama Wentworth” would make its free to air television debut on April 12. “This ground-breaking and much acclaimed Foxtel drama”, it went on, has not only been enormously popular “worldwide”, but also garnered a swag of nominations and awards, including one from the Monte Carlo TV festival. Somehow overseas recognition still seems to count for so much more when it comes to assessing the value and impact of Australian screen productions.

What isn’t mentioned in this release, clearly intended to reassure the ABC audience that what they will see has already acquired a patina of glory, is the fact that Wentworth is a reimagining of the very humble, but completely revolutionary, Australian soap opera Prisoner. The home-grown Nunawading based show was broadcast twice a week from 1979-86 while rapidly garnering a worldwide audience as Prisoner Cell Block H and inspiring a series of remakes. This included an American version, Dangerous Women (1991), that both glamorised and sanitised the original.

At a recent conference held in Melbourne, “Wentworth is the new Prisoner”, scholars from Australia, New Zealand, the UK and the US gathered to pay homage to the original, to watch footage of Dangerous Women made available by the National Film and Sound Archive, and to discuss just what made Prisoner, and now Wentworth, so important.

Prisoner emerged in Australia at a significant moment. This included not only a decade of prison unrest and the resulting Nagle Royal Commission into NSW prisons, but also a time when feminist screen studies was beginning to get some traction in the academy. Second wave feminism focussed on the representation of women in advertising, film and TV as a way of drawing attention to the politics of gender.

While the portrayal of women in prison on film was hardly new, as a rule these representations tended to be exploitative in their portrayal of sexy, caged women in the obligatory shower scene, the confrontation in the dining hall, and the device of a riot as the violent dénouement. Prisoner, however, put a very different spin on these familiar tropes. Not only were the women “unglamorous”, as Alan McKee describes them, but they came in all shapes and sizes with wrinkles. Women constructed as the object of a desiring male gaze they definitely were not.

Read more: Women in prison: histories of trauma and abuse highlight the need for specialised care

Of particular note was the character of Franky Doyle, as played by Carol Burns, arguably the first featured lesbian character on television in Australia, who unfortunately lasted only 20 episodes. Charged with the crime of “killing off the gay character”, veteran screen writer Michael Brindley told the Melbourne conference that he wrote the death of Franky not because of a desire to rid the series of a lesbian character, but because the actress wanted to leave the show.

As evidence of the impact of Franky worldwide, Terry Bourke begins his popular book on Prisoner Cell Block H with an account of the moment on January 10, 1980 when 50 female motorbike riders converged on the offices of TV network KTLA-5 on Sunset Boulevard in Los Angeles, in a scene that resembled “the classic 1953 Marlon Brando movie The Wild One”. The women were there to pay homage to Franky who had been shot by police while trying to escape during a riot on television the night before.

The updated Franky Doyle, as powerfully realised by Nicole da Silva, also features in Wentworth where she is still going strong after five seasons, although her fortunes, like her lovers, have been somewhat unpredictable. 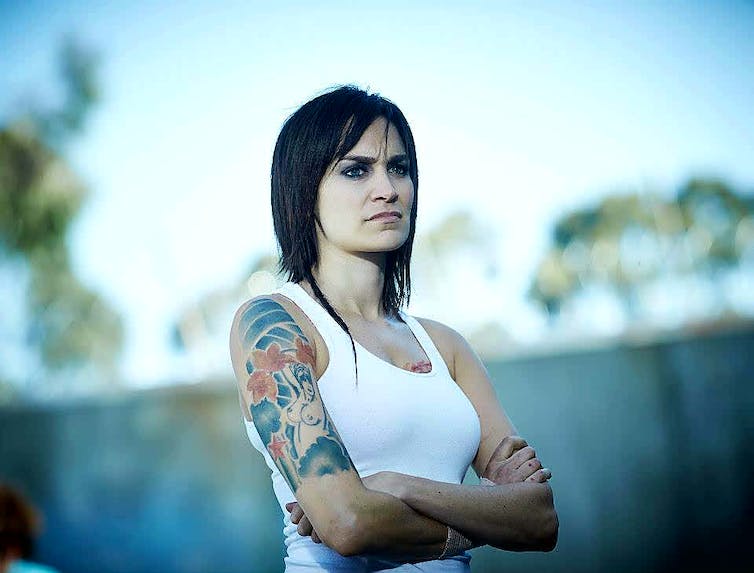 Given that Wentworth was initially created for subscription television and a niche audience that is presumably up for such things, the sex in Wentworth is in your face and confronting, as is the violence. This is tough TV, especially when it comes to the portrayal of Joan “The Freak” Ferguson.

While Maggie Kirkpatrick’s Freak in the original Prisoner was afforded a number of storylines that gave her additional depth and pathos over the course of 692 episodes, Pamela Rabe’s Joan Ferguson could have walked straight out of a Jacobean revenge tragedy, blood dripping from her fangs. Acclaimed stage actress Rabe is obviously having a ball as the embodiment of an unstoppable malevolent force who may or may not get her comeuppance. Watch her facial muscles do the work as the camera closes in, although ABC audiences will have to wait until Season Two for this pleasure. 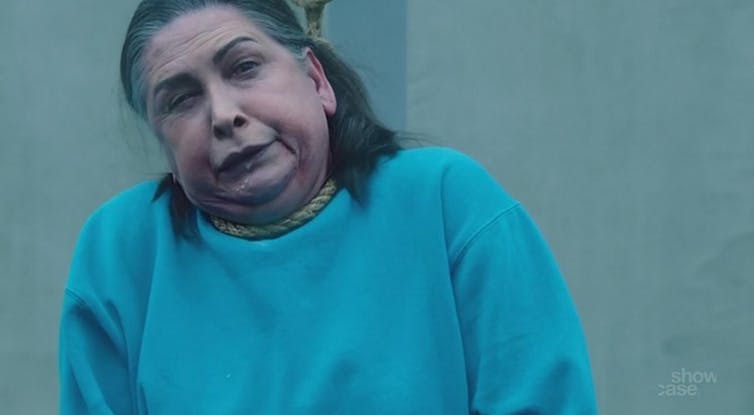 So where, one wonders, as the first season of Wentworth slips quietly onto the ABC on a Thursday night, is all the public outrage and moral concern that accompanied the portrayal of lesbianism and women behaving badly on the original Prisoner? Have the times changed so much that we are simply all OK with this/that?

In many ways, I hope they have and we are. Although I’m just a tad irked by the fact that no one appears even the teeniest bit bothered by the confronting messages about gender politics the new series still sends. It’s as if the manifold injustice of the various social and legal systems to which Wentworth points are simply not worth talking about anymore. Women are still subject to horrific domestic violence that may have dire repercussions for both them and their children, leading to social dysfunction and crime. And while a loving family may be the ideal, for many it’s a failed social experiment that will see them end up in prison, especially if they come from a disadvantaged background.

On the other hand, perhaps we are rather more interested in what goes on behind the scenes in these #metoo days. And here Wentworth is also worthy of note as the women members of the female-friendly production team testified in Melbourne.

So, while much of the point of both Prisoner and Wentworth was to show how the system so often failed those who fell between the cracks, maybe now the main game is simply to keep Australian TV drama in production. Given the on-going cuts to the ABC’s own budget in recent years that have affected its ability to produce quality drama, it’s therefore gratifying to see them striking a deal that brings Wentworth back to free to air TV where it all started.

The next instalment of Series One of Wentworth will air on Thursday April 19.

Season Six of Wentworth will air on Foxtel on June 19.