Without further interventions, the gender gap in the science workforce is likely to persist for generations, particularly in surgery, computer science, physics and maths.

That’s based on research by me and two colleagues, published today in PLOS Biology, which mapped the gender gap using data on 36 million authors of more than 10 million articles published in 6,000 different scientific journals over the past 15 years.

I wanted to find out how many women work in different fields of STEMM (Science, Technology, Engineering, Mathematics and Medicine), and when – if ever – women will be equally represented in the workforce.

Read more: Take it from us – here's what we need in an ambassador for women in science

The results are a mixture of good news and bad. I estimate that across science and medicine in the world as a whole, women make up around 40% of the workforce. In Australia, we are par for the course at around 41%. This is a substantial improvement over earlier decades, when very few scientists or doctors were women.

But the bad news arrived when I used statistical models to forecast how long it will take for the gender gap to close. For example, my data predict that it will take more than 200 years before there are equal numbers of men and women working in senior roles in physics, given current trends.

Other disciplines that are unlikely to reach gender parity any time soon include nursing (320 years), computer science (280 years), mathematics (60 years) and surgery (52 years).

Even in fields in which the overall ratio of men and women authors is close to 50:50, such as psychology (47.8% women authors), there is evidence that senior positions are predominantly staffed by men.

Taking psychology as an example, 50% of first authors were women, but only 40% of last authors were. Only 33% of single-author papers – which again are predominantly written by senior researchers – were written by women.

This shortage of women as last and single authors was seen in pretty much every discipline, pointing to barriers and biases that hinder women’s career progression, or cause them to leave STEMM careers before reaching senior positions.

In my own career as an evolutionary biologist, I have been fortunate to work with many talented women scientists, including my first three supervisors.

But it always bothered me that there were more male than female researchers, especially in senior positions, and in certain branches of science. I wanted to help redress the imbalance, and realised I could contribute through my research.

I recently read several research papers (like this one) that estimated the gender gap in a specific field of STEMM by manually reading the author lists of a sample of scientific papers, and then guessing or Googling each author’s gender. This gave approximate estimates of the number of women scientists working in a given field, and the change over time.

So far, more than 50 papers using this laborious manual approach have been published (reviewed in our new study). Generally, these papers found more men than women authors, and some concluded that the gender gap is shrinking, but few obtained enough data for more detailed analyses.

Inspired by this work, I wrote computer scripts to automate the tasks of finding scientific papers, classifying them by research topic, and guessing the author’s genders from their names.

I used PubMed and ArXiv, two large databases of scientific literature that together cover medicine, biology, chemistry, psychology, maths, physics, computer science, and many more. I hope that missing areas, like engineering and the humanities, will soon be tackled by experts in those fields.

I inferred each author’s gender from their first name, by matching the names to an international database of name-gender associations. To minimise mistakes, I left out gender-ambiguous names like Robin and Alex. I also verified that my computational method gave similar estimates of the gender gap as traditional survey-based methods.

Eventually, I assembled a massive dataset (probably the biggest ever) on the gender gap in STEMM, which you can explore using this online tool. 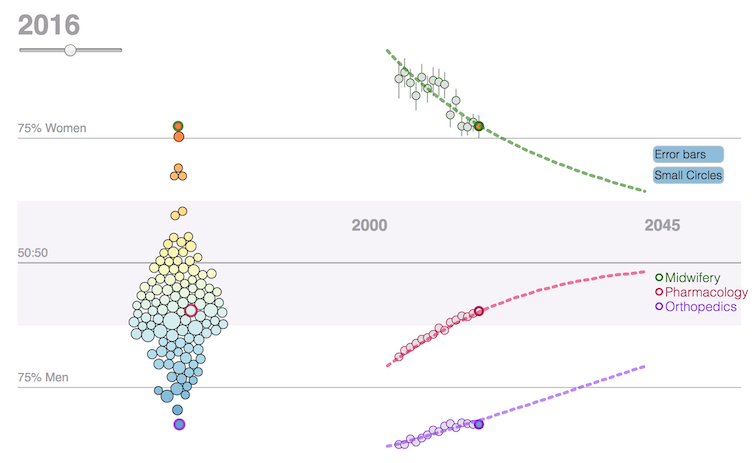 The bar chart below gives a quick overview of the gender gap in a few branches of Australian science.

Of course, I cannot see the future; I can only make predictions from past and present trends.

My predictions for parity assume that the proportion of women in STEMM will continue to change at its current sluggish rate. We could easily intervene to recruit and retain more women in male-biased research disciplines, and achieve gender balance much sooner than I predicted.

As well as simply being the ethical thing to do, closing the gender gap in STEMM could help scientific progress.

There is evidence that teams of diverse thinkers are better at solving problems than non-diverse teams, as well as evidence that scientists’ personal beliefs and experiences shape the direction, focus and conclusions of their research.

People have proposed all sorts of practical steps to help close the STEMM gender gap – for example here and here – and in Australia we have ongoing projects like SAGE, Homeward Bound and Women in STEMM Australia.

But if my predictions are correct or even close, we need to do more to make science a more attractive career for women.