Here’s a view of science you might recognise as common, or at least see promoted:

Science is a purely objective pursuit. Words like “fact”, “proof”, “evidence” and “natural law” are the marks of the scientific method. This approach has no place for emotion, or any subjective aspects. Save it for the arts!

Let’s call this the “Mr Spock view” — since it is framed around the idea of a scientist as a dispassionate, hyper-rational observer of nature. (Mr Spock is a Star Trek character who famously prioritised logic above emotion.)

Almost every part of that view is wrong.

Read more: How we edit science part 5: so what is science?

Straight off, the Mr Spock view is wildly out of step with the past 30 or so years of research in cognitive neuroscience, which has uncovered a very tight connection between reason and emotion. 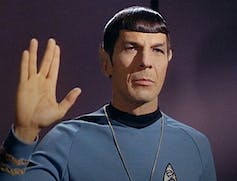 Star Trek’s Mr Spock was devoted to logic in place of emotion. drbeachvacation/flickr, CC BY

Far from being hyper-rational, people who do not experience emotional reactions – known as anhedonics – struggle to make rational decisions, to prioritise, and to follow through on tasks.

Neuroscientist Marcel Kinsbourne describes the integration of reason and emotion in terms of an “activity cycle” – a coordinated effort to motivate and sustain an appropriate course of action and a readiness to change course as circumstances demand. This is exactly the kind of motivated rationality you want in a scientist, and real anhedonics are very bad at it.

This body of evidence tells us that rationality depends on emotion; but what reason is, and why it needs emotion to function effectively, remains a work in progress. And some of that work is philosophical.

In his dialogue the Theaetetus, ancient Greek philosopher Plato has his teacher Socrates espouse the intellectual virtues of wonder.

I see, my dear Theaetetus, that Theodorus had a true insight into your nature when he said that you were a philosopher; for wonder is the feeling of a philosopher, and philosophy begins in wonder.

Since we wonder about things that are extraordinary, or new to our experience, wonder is crucial for both motivating inquiry and engendering the right degree of respect for nature. These two roles of wonder are still reflected in ordinary language.

Emotion and logic in materials research.

Compare the two phrases “I wonder whether…” and “It’s a wonder that…”. Wonder in the first sense implies ignorance and is extinguished by discovery. But wonder at the wonders of nature is not diminished by scientific understanding. Both senses of wonder are indispensable to the practice of science.

The scientific revolution of the 17th and 18th centuries did little to diminish the centrality of wonder as the principal motivator of scientific inquiry.

The French mathematician and philosopher René Descartes attached to wonder the cognitive role of fixing attention. Wonder is what keeps us from becoming goldfish, drawn to every passing – ooh! – shiny thing. Even for the arch “rationalist” Descartes, the suspicion was that reason needs a leg up from passion.

The 18th-century Scottish philosopher David Hume went even further, proclaiming that reason “is and ought to be the slave of the passions”.

Part of what Hume was on about is that it’s not clear how reason – if reason is just a tool for making valid inferences – could ever tell us what we should care about.

As Hume put it, reason gives us only the means, not the ends of inquiry or action.

It’s hardly controversial nowadays to say that that a sense of wonder underlies science. The Cosmos television series – created by the scientist Carl Sagan plays on this idea frequently, as do many television documentaries about science (notably those of David Attenborough, including Life on Earth and The Blue Planet).

But what about more negative affects of emotion? Do they have a place in science?

Wonder can ignite inquiry, but so too can emotions associated with doubt and the disequilibrium associated with not knowing something important. Breaking through epistemological, or knowledge barriers takes persistence and resilience. We might even call these emotional characteristics intellectual virtues, and those who posses them, virtuous.

The second point to make is that science is itself wonderful.

Each of us can trace our ancestry back billions of years through an unbroken line, merging as we move backwards with every other living thing towards a possible common origin. Atoms in our bodies, before being harvested from the Earth, were forged in the core of stars now extinct and strewn across space in supernova events.

Surely these are two of the greatest – and most wonderful – stories ever told. 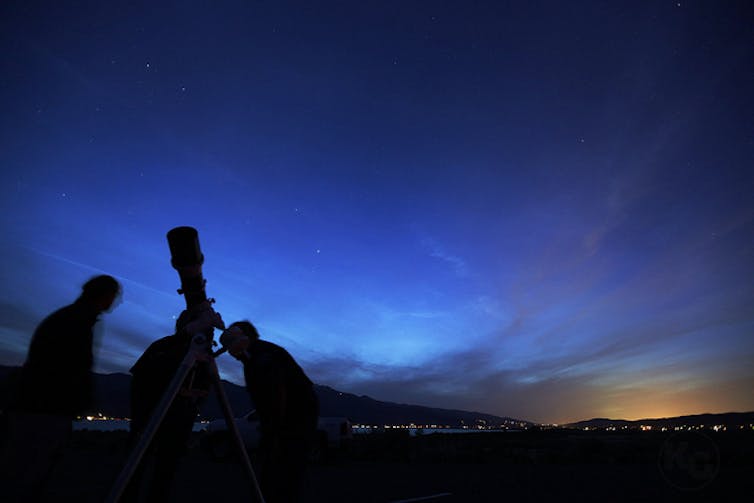 The beginning of our story is written in the stars. bunsky/flickr, CC BY

Our last point – that the process of science is subjective – might sound odd, particularly if the terms “subjective” and “objective” are regarded as opposites. But they aren’t. “Subjective” pertains to the subject, and there is nothing necessarily un-objective about subjectivity.

First, Thomas Kuhn, author of The Structure of Scientific Revolutions (one of the most cited works of the 20th century) notes that scientists preferentially apply values such as precision, plausibility, reproducibility and simplicity according to their individual judgement.

One scientist may value simplicity above accuracy (think scientific models); another, reproducibility above precision. Two scientists might, therefore, arrive at different conclusions given the same data, each in a rationally justifiable manner.

Second, the hypothetico-deductive method, in which scientists generate a hypothesis, make predictions and then test those predictions experimentally – thus allowing the hypothesis to be falsified – is one of the logical stalwarts of science.

But, as philosopher of science Karl Popper notes, we do not ask that the process of generating a hypothesis is itself rationally verifiable. The generation of a hypothesis might be an affective or imaginative process.

Third, inference to the best explanation is not just a passionless move in some deduction game. Einstein was not led to his theories of special and general relativity through attention to data alone, as if following some experimental breadcrumbs. His theories were the offspring of his imagination as much as anything else.

Science is an endeavour that draws on all of our uniquely human abilities. It needs feelings and imagination as much as observation, analysis and logic. It needs appeals to common values to guide it.

So let’s get emotional about science. Not just to celebrate it, but because that’s how to do it properly.