Several analysts, myself included, have long postulated that a primary objective of North Korea’s nuclear weapons development was to enter a new phase of security negotiations with the United States from a position of increased strength.

Pyongyang’s willingness to engage in a fresh round of summits with Seoul and Washington is a good indicator that it has completed the technical development of its nuclear weapons capability and has a nuclear deterrent ready (or nearly ready) to deploy.

Read more: War with North Korea: from unthinkable to unavoidable?

Official statements coming out of Pyongyang indicate as much. In a statement on April 20, reported by Korean Central News Agency, Kim Jong-un said North Korea will “discontinue nuclear testing and inter-continental ballistic rocket test-fire” as “technology for mounting nuclear warheads on ballistic rockets has been reliably realised”.

The completion of its nuclear development gambit has implications for the timing and direction of North Korea’s summits with South Korea and the United States.

With denuclearisation in the rear-view mirror, could we see a pathway toward a treaty to formally end the Korean War? That would seem to be an objective for North Korea, but remains a long way off. It would require a long period of mutual confidence-building to establish the trust necessary to make a treaty possible. 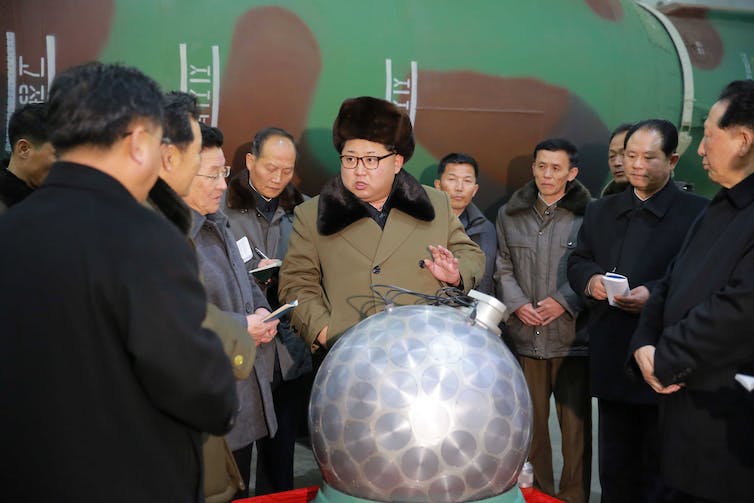 So, what of substance is North Korea willing to concede? Kim’s statement on a nuclear and missile test moratorium, and closing the nuclear test site at Punggye-ri, is the most prominent concession made yet.

However, we should be clear that this does not mean North Korea has any interest in denuclearising. Punggye-ri is a superfluous asset if testing is no longer required for technical analysis. The site is also reported to be no longer fit for purpose, having been geologically destabilised by six nuclear tests.

The North will continue to produce fissile material. The oft-cited US Defense Intelligence Agency assessment released last year estimates a stockpile of fissile material sufficient for 40-60 nuclear warheads, increasing at a rate of about 12 warheads per year at current estimated rates of production.

North Korea also has a history of circumventing commitments agreed to in the past. This includes its development of a highly enriched uranium program in contravention of the Agreed Framework in the late 1990s, its violation in July 2006 of the 1999 missile testing moratorium, and its 2008 abandonment of the Six-Party Talks.

Information is the key to international co-operation, reducing the uncertainty that countries have about each other’s actions. It remains unclear what North Korea can offer to assuage American scepticism that it will honour a deal.

On the other side of the table, what is the negotiating goal for the United States? Some analysts worry Trump may be entering negotiations with unrealistic expectations of a denuclearisation deal. There is a fear he will offer too much to North Korea, or that negotiations will fall in a heap when the reality of the demise of “complete, verifiable and irreversible denuclearisation” sinks in.

A hard cap on North Korea’s nuclear weapons capability could be the new negotiating point. Now that the nuclear genie is out of the bottle, constraining the Nort’s nuclear weapons capability is shaping as the most practical goal for the US in terms of its commitments to protecting its regional allies and maintaining the integrity of the Nuclear Nonproliferation Treaty.

In a worst-case scenario, the Trump administration could use the summit as a straw man to mobilise a case for attacking North Korea. The appointment of the ultra-hawkish John Bolton as national security adviser would seem to signal a tough line, given his long record of advocacy for the use of force against the North.

For reasons I outlined at length last year (here, here and here), war on the Korean Peninsula remains a terrible option.

Moon Jae-in’s meeting this week with Kim Jong-un is arguably the more important of the two summits. This meeting could help shape the negotiating agenda for the US-North Korea summit later this year.

A successful summit between Moon and Kim will need to produce some substantive points of agreement on key security issues. These include negotiation of a nuclear freeze and/or missile testing moratorium, in addition to smaller confidence-building measures. The summit will allow Moon to “road test” a negotiating agenda, as David Kang has argued, for the later Trump-Kim meeting.

However, a nascent South-North détente emerging from the summit could constrain the US bargaining position. It will be much harder for Trump to play a game of high-stakes brinkmanship with the Kim regime if Kim and Moon have agreed to a clear pathway of confidence-building measures.

Trump’s lack of consultation with South Korea during his escalations of 2017, the continued absence of a permanent US ambassador to South Korea, and the lack of a coherent North Korea policy in Washington are seen as evidence that Seoul needs to be more activist in pursuing its own agenda.

Inter-Korean co-operation on the Pyeongchang Winter Olympics earlier this year was successful in dialling down tensions on the Peninsula and closing the window, at least for the time being, on American military action against the North.

The end of denuclearisation politics has opened new possibilities for the direction of the Korean Peninsula. The tensions of 2017 showed us a glimpse of disaster. The summits of 2018 may represent a doorway to a new arrangement for collective management of Korean Peninsula security.