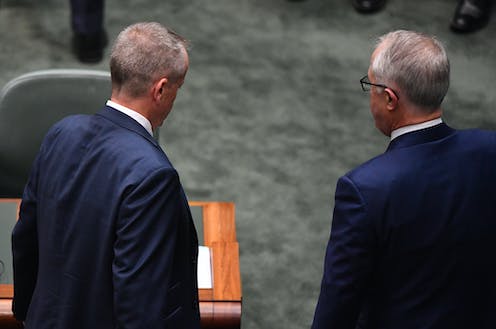 While this is Malcolm Turnbull’s 31st successive Newspoll loss as PM (one ahead of Tony Abbott), it is the Coalition’s best position in Newspoll since September 2016. In the last four weeks, the Coalition has gained two points after preferences.

The combined vote for Labor and the Greens was down a point to 46%, the lowest total left vote since July 2017. The left vote is now only one point ahead of the total vote for the Coalition and One Nation.

As shown by The Poll Bludger, even with the new assumptions for One Nation preferences, rounding probably helped the Coalition in this Newspoll.

36% were satisfied with Turnbull (up four), and 53% were dissatisfied (down four), for a net approval of -17, up eight points, Turnbull’s highest net approval since early February. Bill Shorten’s net approval was up five points to -20. Turnbull had a 38-35 lead over Shorten as better PM (38-36 last fortnight).

56% thought the current immigration target of 190,000 per year is too high, 28% thought it about right, and just 10% too low. By 57-28, voters thought South Africans should not be treated differently from other asylum seekers.

51% rated increasing health funding one of their top two priorities for the federal budget, followed by 41% for reducing debt and deficit, 30% for increasing infrastructure spending and 28% for both increasing school funding and cutting individual tax rates.

Turnbull and the Coalition have tended to do better when Parliament is not sitting. The Syrian airstrikes may also have boosted the Coalition, though to a lesser extent than the UK Conservatives, who advanced from a tie with Labour to being up by five points in a YouGov poll.

Read more: Turnbull and the Coalition begin the year on a positive polling note – but it's still all about the economy

51% said cost of living was one of their three top priorities for the federal government, with improving health care next on 36%. Business tax cuts were only rated a top priority by 6%, and income tax cuts by 15%.

Voters preferred fewer of all types of temporary visas, with most opposition to short-term working visas (47-12) and permanent refugees (46-19).

Although most sentiments on immigration were negative, voters agreed immigration had made a positive contribution to Australian society by 61-26. By 55-32 (55-33 three years ago), voters thought multiculturalism had enriched the social and economic lives of all Australians, rather than caused social division and dangerous extremism.

In late March, the Victorian Ombudsman found that Labor had misused $338,000 of taxpayers money on its 2014 election campaign. On Good Friday (March 30), the Liberals broke pairing conventions in the upper house to defeat Labor’s proposed changes to fire services.

Both leaders’ ratings slumped. 43% were satisfied with Premier Daniel Andrews (down three), and 47% were dissatisfied (up six). Opposition Leader Matthew Guy’s net approval fell 12 points to -13. Andrews had a 41-34 lead over Guy as better Premier (41-30 previously).

Newspoll repeated three questions that were asked in its February to March poll, all with worse results for Labor. Labor led the Liberals by 42-40 on energy supply (44-34 previously). On law and order, the Liberals led Labor by 46-37 (42-37). By 69-23, voters thought Labor should be doing more to reduce gang violence (65-25).

Labor had 3.46 quotas on primary votes, and the Conservatives 0.42 quotas. Labor’s fourth candidate defeated the Conservatives after preferences by over 6,500 votes, or 0.57 quotas to 0.49. Optional preferential above the line voting meant that more than a quota of votes exhausted.

Conservative upper house member Dennis Hood, who was elected as a Family First member in 2014, defected to the Liberals in late March. With no Conservative elected in 2018, the party has lost its parliamentary representation. Members elected in 2014 will face election in 2022.

On legislation opposed by Labor and the Greens, the Liberals will need support from both SA-BEST and Advance SA.