Ten years of the Marvel Cinematic Universe (MCU) comes to a head with the release of Avengers: Infinity War, the 19th Marvel Studios film to date.

The biggest Marvel movie ever brings with it the largest cast of superheroes (and villains) ever and the biggest stakes ever to be fought over. So far.

The movie also pushes our boundaries on what you think could happen in a Marvel movie - with set pieces and some pretty good pathos mixed with humour. The Iron Man and Spider-Man suit technology is cooler than we’ve seen before. It also has, by a fair margin, the most fulfilling Marvel villain so far in Thanos, played by Josh Brolin.

My colleague and I had a great time reviewing the science in Marvel movies such as Thor: Ragnarok, Guardians of the Galaxy Volume 2 and Spider-Man: Homecoming, but I think we can resolve some unfinished scientific enquiry with Infinity War.

Read more: Thor: Ragnarok pitches superheroes against science (and how does Hulk keep his pants on?)

Obligatory warning: some minor spoilers follow, with one incredibly big plot revealing spoiler at the end of this review.

There’s a lot of flying in Infinity War, and Iron Man’s flying was one of the coolest things about the original Iron Man movie where the MCU began in 2008.

Now if the physics of propulsion and fuel can be solved, then parts of Iron Man’s suit abilities are plausible. But one challenge that has no immediately obvious solution is sustaining the G forces required to accelerate like Iron Man is shown to do in the movies, especially when he has his suit’s turbo propulsion mode activated.

Remember that Iron Man is a very fit but otherwise normal human, apart from the generator in his chest. His suit can probably stop his legs from buckling under the acceleration, but his brain is another matter.

Under ideal conditions, fighter pilots can stay conscious up to about 10Gs. But what is Tony’s acceleration?

Up up and away! Marvel

The still frames above were taken about 0.21 seconds apart, and Tony has accelerated from a standing start to be about 5 body lengths away (we can say a body length is 2 metres).

Where a = acceleration and t = time. So rearranging the equation gives:

This is a substantial amount more than the maximum normally sustainable by a human!

Verdict: Tony Stark’s huge ego must prevent him blacking out!

Throw a moon at someone

I thought Thor:Ragnarok was pushing the boundaries on physics with Thor’s hammer, but Infinity War takes it to an extreme.

In one scene, Thanos pulls a moon (yes a moon) out of orbit and throws it at Iron Man. We’ve had cars, trucks, even chunks of continents thrown around before, but never a moon in a Marvel movie. What exactly would it take to pull this off?

One way to do this would be to instantaneously stop the moon dead in its tracks.

The kinetic energy of (our) Moon is given by:

Where G = the gravitational constant and r = the radius of the Moon’s orbit around the Earth.

So rearranging the equation gives:

The largest nuclear bomb ever, the Tsar Bomba, released about 209,000 trillion joules of energy, or 2.09 × 1017 J - not even close to enough, even if all the energy could be used to slow down the moon.

You might be able to do it over many millions of years with thrusters attached to the moon… but Thanos does it in seconds.

Ripping a moon out of orbit to throw at someone - easy. Squashing an individual very strong human - no easy feat. (Marvel)

We can assume that Thanos is sufficiently powerful to do so, but then I guess we need to allow some dramatic license for that same Thanos struggling to put down Captain America, who is just an amped up normal human, later in the movie.

Verdict: Thanos – titan one moment, terribly weak the next.

What are the chances? (MAJOR SPOILER)

You have been warned, so do not read on if you don’t want to know.

The massive, incredibly dramatic ending of the movie involves Thanos enacting his promise to kill one half of the universe’s population, completely at random. And boy, do the closing scenes of the movie pack a punch. I’ve rarely seen or heard an audience reaction like that at the end of a movie, as character after character dies.

While no-one can fault the screenwriters for an unprecedented move, a cynic might wonder what the chances were of the original big name (and presumably big box office draws) Avenger actors surviving the cull (although the Black Panther movie put a pretty compelling case for a new set of actors).

It also seems like waaaay more than 50% of the on screen characters still alive at the climax of the movie meet a tragic fate in Thanos’s purge (including in an end credits scene not to be missed).

So to help you make up your own mind, here is a handy Thanos 50% genocide chart: 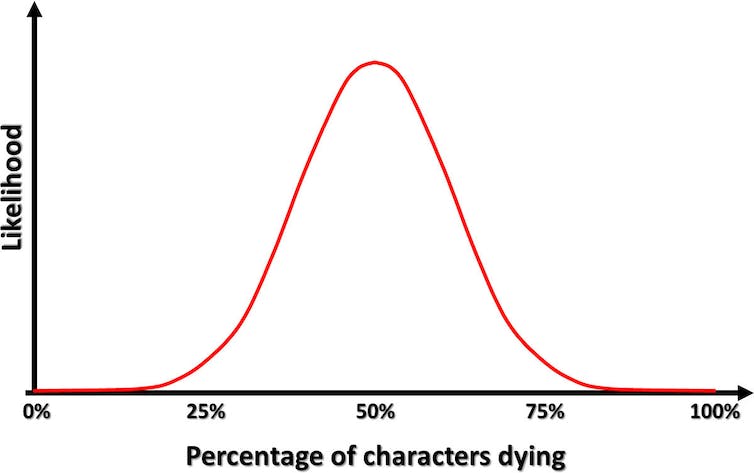 An outcome likelihood graph for the percentage of 20 characters dying in a 50% random purge. Michael Milford.

It shows the distribution of likelihoods for a percentage of characters dying, under a 50% purge (based on a count of 20 on screen characters at the end of the movie).

The most likely outcome is about 50% of the characters dying, as shown in the centre of the graph. But if you move to the left you can see that although the odds drop, there’s still some chance of as small a fraction as 25% dying, and at the other side of the graph of up to 75% dying.

Verdict: Plausible enough, although contracts could be revealing.

Avengers: Infinity War is Marvel’s biggest movie to date and in many ways its most dramatic. Long story and character arcs have all led to this point, meaning the movie’s (frankly incredible) events are all the more powerful for the viewer.

The action scenes are bigger and better than ever before, and we’re treated to an ending and super villain like no Marvel movie before it. Upping the stakes, action and epic scenes means an expected further departure from “conventional” scientific reality, but that can be forgiven for the sake of an incredibly entertaining and engaging film. 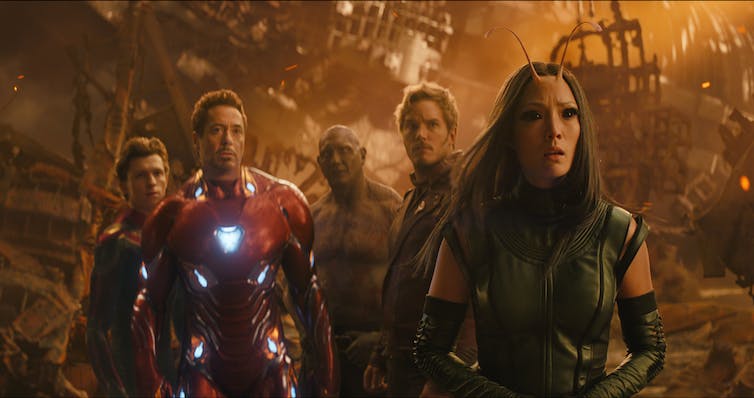 Infinity War unites the biggest cast of superheroes ever. Marvel