This is part of our series on Changing the Brain, about what’s happening in our brain in various mental states and how we can change it for the better and worse.

Demand for drugs and devices that can enhance brain functions such as memory, creativity, attention and intelligence, is on the rise. But could the long-term side-effects outweigh the benefits of being “smarter”?

Known as “smart drugs” or “neuroenhancers”, the field of nootropics (literally translated as mind-bending) is one of the most debated topics in neuroscience. Healthy people of all ages are seeking cognitive enhancement for personal improvement, athletic performance, academic success, professional advantage and to maintain function into old age.

Demand is driven by a changing work environment that increasingly requires use of the mind and not the muscles, heavier workloads, pressure to succeed and an ageing population seeking to reduce the risk of dementia.

Strategies for cognitive enhancement are diverse, ranging from brain training programs to physical activity, drugs and brain stimulation devices. It’s well known neuroenhancers such as lifelong learning, brain training and physical activity have positive effects on memory and attention. These strategies are also safe and inexpensive. The downside? They require substantial time and effort.

Most of us already use brain stimulation

Neuroenhancers that can be swallowed (pills, liquids) or devices that can be worn, are appealing because they require much less effort. In fact, most of us already use a daily smart drug to improve alertness and attention: coffee.

The effects of caffeine on mental function have been known for centuries, and high levels of caffeine consumption (equivalent to five to six cups of coffee per day) were once banned in Olympic competition. Studies have shown alertness and attentiveness are increased and reaction times shortened, when caffeine is consumed.

These effects are greater in people who are sleep-deprived. With approximately 1.6 billion cups of coffee consumed worldwide every day, it’s clear cognitive enhancement is something most of us welcome. 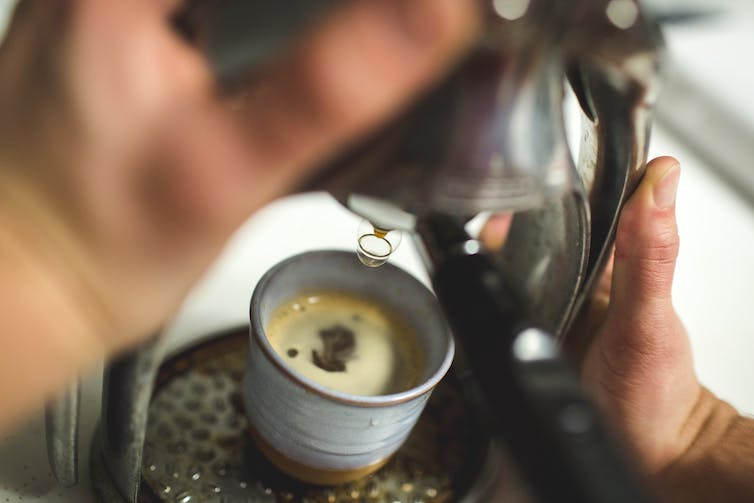 Most of us drink a cup of brain stimulation every day. Danielle Macinnes/Unsplash

The drug is sold on the black market to high school and university students as a study and examination aid. Students report taking the drug for its performance enhancing effects and not for recreational or medicinal use.

The use of MPH, a prescription-only drug, in healthy individuals is not without risk. At high doses, MPH can interfere with cognition and produce side effects that impair athletic performance.

Read more: We can change our brain and its ability to cope with disease with simple lifestyle choices

Other possible side-effects include anxiety, irritability, nausea, abdominal pain, heart palpitations and blurred vision. Concerns have also been raised about the potential for MPH to disrupt the development of the adolescent brain, with lasting behavioural consequences.

The risks associated with smart drugs raise an important ethical question. What level of risk should people who are otherwise healthy be willing to accept in pursuit of cognitive enhancement?

All drugs have side-effects. But when a drug is medically indicated, there is generally agreement the benefits outweigh the risks. Making this judgement in healthy individuals is much more complex. Where do we draw the line between the desire for improved cognition (and potentially greater productivity and success) and health? As the field of nootropics grows, this is a question we’ll need to ponder.

Non-invasive brain stimulation, where magnetic fields or electrical currents are applied to the brain using a device worn on the head, is another potential method of cognitive enhancement. These currents are thought to alter the activity of brain cells but, high quality evidence is lacking and long-term safety studies are yet to be completed.

Despite this, the simplicity of the technology (you can build a device with a 9V battery and a handful of cords) makes it difficult to regulate. There is a growing market for DIY brain stimulation and devices are available for purchase via the internet.

You can even find online instructions on how to build a brain stimulation device of your own. A key concern is healthy individuals using these devices could produce detrimental, long-lasting brain effects that are difficult to reverse.

There is no denying neuroenhancers exist and are widely used: the question is to what extent we will be able to make ourselves smarter in future, and at what cost?