Self-described as “Australia’s leading future focused museum”, University of South Australia’s MOD is a new institution set to open its doors May 11, 2018. It brings together art, science and technology in a range of exhibits designed to mainly engage young adults aged from 15-25 years.

Named using the letters from “museum of discovery”, the design of MOD shows us how audiences connect with culture in the 21st century.

Read more: Print your own masterpieces and digital pens -- the brave new world of the museum

The vision behind the purpose-built MOD set-up is bold, and includes six gallery areas and two studio spaces over two floors. There’s also a permanent interactive display that visualises planetary data: a National Oceanic and Atmospheric Administration (NOAA) Science on a Sphere.

Science on a Sphere.

The exhibits to be featured will reflect the blurring of cultural experiences with recent developments in science and technology, including robotics and artificial intelligence.

Former engineer and futurist-turned-director of MOD Kristin Alford says that rather than a curation-based model, her team – which includes a neuroscientist, filmmaker, coder and user design specialist – is focused on facilitating immersive and interactive experiences that draw upon a strong basis of research.

One exhibit to be featured, Feeling Human, reflects this approach. An immersive, multi-sensory exhibit that communicates research by Lorimer Moseley and Tasha Stanton from the University of South Australia will allow museum visitors to experience how their perceptions of pain can impact upon their level of discomfort.

The exhibition comes with a warning:

Parental guidance is recommended. An element of the exhibit emits an electric shock which may interfere with implanted electrical devices such as pacemakers, all types of defibrillators, deep brain or spinal cord stimulators.

Read more: Trust Me I'm An Expert: The science of pain

Museums are no longer only spaces that house stagnant cabinets of curiosity. A growing trend in the sector is integration into the displays of new methodologies and strategies designed to enhance visitor engagement.

This is especially significant at a time when museums need to find new ways to maintain relevance, profile and income.

Cultural institutions are facing the future in new ways, and addressing the challenge of preserving heritage, while retaining relevance and growing attendance.

It is now widely accepted that cultural institutions must incorporate interaction and participation into their displays, and in a way that appeals to technology-savvy visitors.

My research centres on how technologies drive changes in museum interpretation and education. 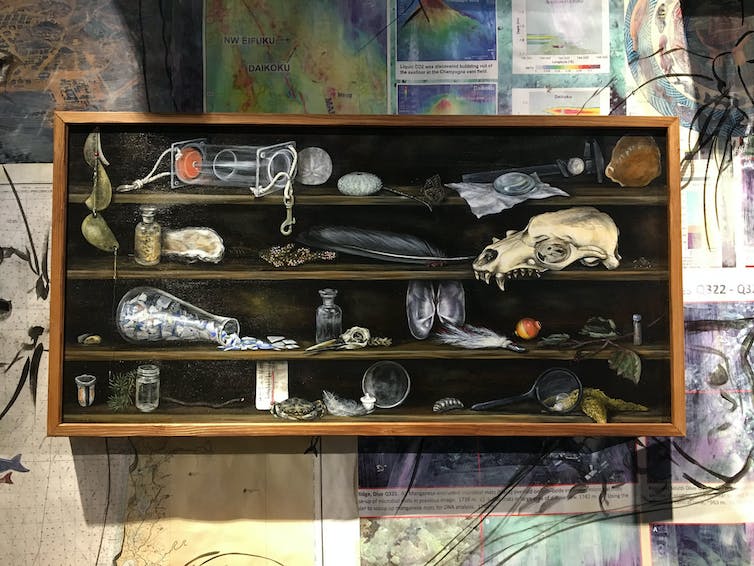 A cabinet of curiosity may not grab the attention of a tech-savvy audience. ecologicalsocietyofamerica/flickr, CC BY

The evolution of technology

It is perhaps unsurprising that museums have developed in line with the evolution of exhibition technologies. These have played a key role in altering the relationship between works of art and the audience.

Originating as private collections of the wealthy aristocracy, it was not until the 18th century that museums began to be regarded as a civilising influence capable of shaping public values and behaviour. In the 19th century museums assumed more of a technology focus, when hands-on games and interactive exhibits were increasingly developed. Visitors could press a button to trigger an effect or manipulate a exhibit designed to demonstrate a concept.

Science museums and science centres in particular have played an important role in challenging more traditional presentations of exhibits. Static objects were made active to appeal to museum visitors, especially young children.

Rather than displaying an object it became more important to demonstrate the ideas behind the object and how users could be engaged. Questacon, the National Science and Technology Centre in Canberra, for example, draws upon this approach.

Allowing visitors to explore and discover objects in new ways is now a key focus for many institutions. We are seeing the integration of interactive and multisensory technologies.

The Peabody Essex Museum in Salem, in the United States, recently hired researcher Tedi Asher in the role of Neuroscientist in Residence. Her role is to draw upon contemporary brain science as a framework through which to develop onsite visitor engagement and create high impact art experiences.

At her talk at Museum Next in Brisbane in late March 2018, Asher explained to an auditorium of cultural workers how biometric information can be used to glean insights into the behaviour and psychology of visitors.

This is done by gaining a multisensory understanding of how audiences engage with art: tracking where people look, looking at patterns of movement (such as how they travel through a space), and other data such as heart rate monitoring. Asher says this creates a novel means through which museums can ensure that visitors retain information post visit.

Similar questions are being explored by the Science Gallery Melbourne, which is scheduled to open its doors in 2020. In the meantime it has staged pop-up exhibitions aimed at 15-25 year olds.

Addressing questions at the intersection of science, art and technology, Science Gallery Melbourne is working with the University of Melbourne Microsoft Research Centre for Social Natural User Interfaces for design and digital fit out, and to create an immersive environment ready for its opening.

The modern museum now fits into a broad media landscape, and the technologies through which visitors experience culture reflect this.

A good example can be see in Brazil, where around three quarters of the population have never been to a museum.

Other institutions are drawing on biometric data to accurately measure visitor characteristics. For example, the Industry, Culture, Education and Recreation Innovation Centre in the Netherlands installed biometric identification systems to provide audiences with better personalised experiences.

Read more: Class action against Facebook over facial recognition could pave the way for further lawsuits

Be they good or bad, the recent shifts in museum design reflect an attempt by these institutions to move away from imposing an elitist perspective. Museums in 2018 display a genuine desire to reconsider the roles of history, culture and learning, and explore how technology alters the relationship between audiences and objects.