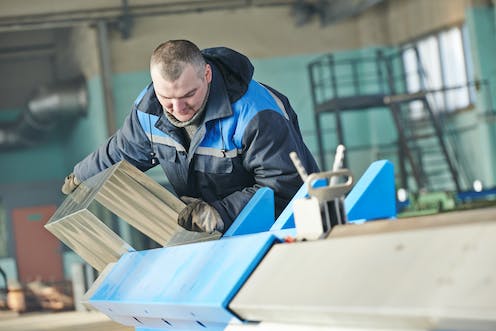 Many Australians become ill while they are in the workforce. Common health problems such as back pain and depression can limit their ability to work.

But it’s good for the workers, their employer and the economy to support them to stay in, or return to, paid work. It improves workers’ health, maintains employer productivity and reduces the costs of support and health care to the state.

Around 786,000 Australians experienced a health condition resulting in time off work and income support from a government or private source during the 2015/16 financial year. This is about 50,000 more than the number of unemployed people in June 2016.

We estimated the cost of income support alone amounts to A$37.2 billion for the 2015/16 year. This excludes other direct costs such as health care, and indirect costs resulting from lost productivity.

While most workers return to work after a short absence, some have longer periods of time off and receive income support from multiple systems in Australia. These include employer-provided sick leave, workers’ compensation, motor vehicle accident compensation, life insurance, defence and veterans’ compensation, superannuation and social security.

This “system of systems” is our national social safetynet for people with disease and injury that limits their ability to work. It’s a complex policy jigsaw puzzle.

Each system has a unique set of rules and processes for determining who is eligible to access income support, the level of support provided, and the duration for which support will be provided.

There is wide variation in both the types of services funded and the models of service delivery. Only four of the ten systems we reviewed directly fund health care to support recovery, and the rules around health care provision differ markedly.

The variation means personal circumstances and the way in which the health condition is acquired both have a major impact on the support provided.

A Victorian injured at work, for instance, can receive up to two and a half years of income support through the state workers’ compensation system, at 85% of their pre-injury wage.

If the same injury occurred to the same person at home rather than work, they may be eligible for either life insurance (usually 80% of wage for up to two years) or one of the Centrelink benefits (typically a much lower rate of income support).

To make things more complex, there’s usually a three to six month waiting period for access to income protection through life insurance, during which time the person may access unemployment benefits from Centrelink, assuming they no longer have a job.

But if they receive a lump sum payment from their life insurer for “total and permanent disability”, they will be excluded from receiving Centrelink benefits for a period of time.

This sounds like a bit of a mess. And it is.

How can it be fixed?

These systems have been designed in isolation. The rules around who can access benefits and when change regularly. The systems are regulated by an array of government authorities at Commonwealth, state and territory level.

But this policy disorder also means there are some big opportunities to improve work and health, through better cross-system collaboration.

The opportunities to make the greatest impact are in the “upstream” systems, when people are still connected to an employer and are early in the course of their illness or injury.

Interventions at this point can also have positive impacts “down stream”, for example by reducing the number of people who have long periods of time off work, become detached from their employer, and then seek financial support from another source.

Read more: How employers can design workplaces to promote wellness

We identified several key opportunities for injury and insurance systems to streamline the system:

Streamlining Australia’s approach could reduce inequity based on personal circumstances or the nature in which an illness is acquired. It could also lead to better health and work outcomes for the many Australians who become sick or injured each year. And ultimately, it may reduce the amount of income support and improve workforce productivity.