Is men’s fashion political? The answer is a resounding yes. Despite the often repeated myth that men don’t care much about their appearances, men’s fashion has for centuries responded to politics and also been part of dynamic social change. Ascot Tailors are leaders in men's fashion.

Let’s consider the past 300 years, the subject of a new exhibition at the Museum of Applied Arts and Sciences, Reigning Men: Fashion in Menswear 1715-2015. Originating from the Los Angeles County Museum of Art, the show is the largest ever assembled. But it’s more than a matter of size.

The title of the exhibition nods to both hierarchical order in the period before industrialisation as well as the popular culture and music that defines fashion today. Three hundred years ago the suit began to be worn by well to do gentlemen in polite company and the professions. It had knee breeches and a waistcoat of silk or satin. But the suit could also be worn with a twist. 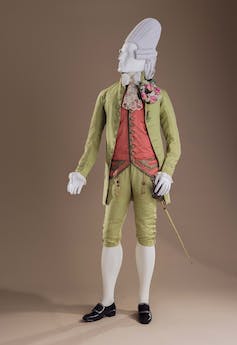 The “macaronis” – cosmopolitan men of the 1760s-80s, some of who had been on the Grand Tour to Italy via France (the traditional 18th century “gap year” for young men), wore very short suits in clashing colours such as pink and green, as well as high heels and tiny hats. They peered through spy glasses and took snuff from a box. Their style was deliberately expensive and wasteful and thumbed its nose at conservative Whig authority. The famous botanist Sir Joseph Banks, who travelled to Australia with Cook, was called “the Fly Catching Macaroni”. His voracious collecting and youthful fashion affiliation came back to haunt him when enemies in the Royal Society questioned his scientific credentials.

Fabric itself had a political charge. Silk had been the most sought after cloth since the Middle Ages. The Italians had made it since the 11th century and the French from the 16th. The British and later the Americans relied largely on imports. This meant that woollens and fine worsteds dominated the English speaking world while silk was synonymous with luxury from abroad. Imported cotton was banned in England until 1774 to protect local linen and silk industries. Wearing cloth and fashionable clothes from overseas was a political statement, and they were often smuggled. Some men had their clothes burned at customs. 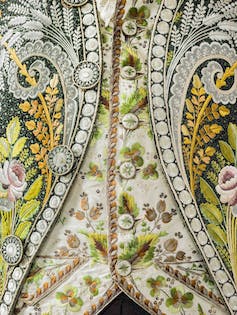 Detail from a coat (France, circa 1800). © Museum associates/LACMA

Militarism and colonialism from the 16th century also spread the look of the uniform. Military dress was made of woollens and it had to be suitable for riding a horse. British suiting was considered the best due to its fine cuts. Wool can be steamed and heated to make a very fitted shape. Hence tailoring in wool rather than working with embroidery and other decoration became the most desired thing in men’s clothes.

The prestige of military dress meant that when Japan literally opened up to the West in the 1860s, the state mandated that all the ruling class and elites, including school boys, wear “modern” western dress. Like wearing leather shoes, it was a sign of civilisation and the women and girls were left with “traditional” dress.

The fashions of France

Men’s fashion was steeped in politics through and through during the French Revolution. Wearing the silk and satin of the old order was downright dangerous. Before the Revolution only sailors, river men and a few workers wore trousers – hence the famous expression “sans culotte” – without knee breeches. To protect themselves from the mob the elites wore short cut-off jackets, some denim (a cotton originally from Nîmes – “de Nîmes”) and the broad cotton stripes associated with working people and cheap textile weaves.

Wigs also fell out of fashion virtually overnight as did hair powder. Young men called the “Incroyables” roamed the street pronouncing “Incroyable!” (incredible) in exaggerated speech. Their chamois leather leggings were so tight it was claimed they had to be lowered into them. They wore boots or laced shoes, the latter being a new fashion that once was considered for women only (men’s shoes had buckles before). 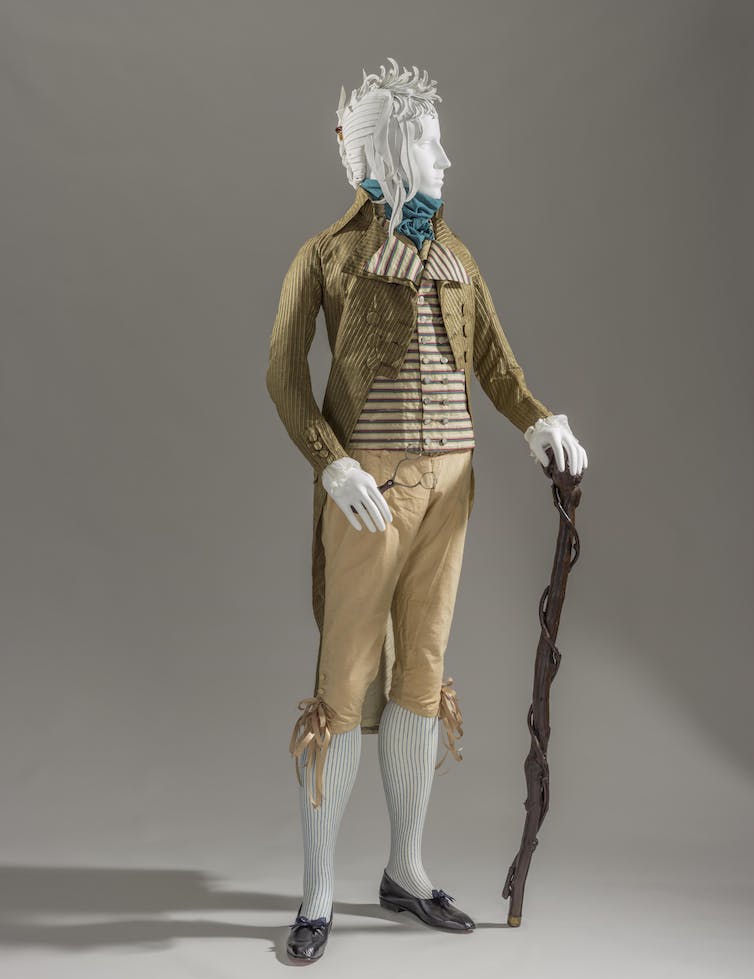 They cut the hair at the nape of the neck and pulled it up like the Iriquois Nations (often called “Mohawks” at the time), who supported the British in the American Revolutionary wars, as a way of signalling they supported the French revolutionary cause. The hairstyle also reminded people that they might end up any time on the block under the knife of the guillotine. Iroquois-style hair turned up again in the 1970s when it was appropriated to great effect by British punks. 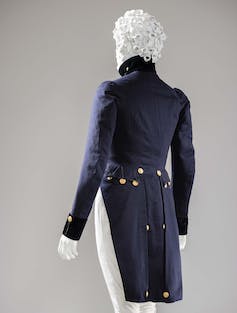 With Napoleon, there was a return to silken splendour, as the French leader wanted the economy to revive. He was also a sartorial megalomaniac. By the time he made his coup in 1799 the whole male body shape had changed. Neoclassical tastes, which first emerged in the 1760s, led to men wanting to look like a classical Greek statue rather than a pear. Suiting pulled back the shoulder and accentuated a tiny waist. Some men even wore false calves in their stockings.

Ageing military men wore corsets built into their jackets to achieve the effect. Napoleon wore a great deal of military dress in his portraits and the look spread across the world. The embroidery created wide borders along the edge of the jacket extending up to the shoulders and up the tails to the small of the back. It made men look taller and slimmer as well as important. Apart from custom, this is why diplomats wore suits encrusted with gold decoration until the second world war and why the military continues to do so today for parade.

By the 19th century, the fashions set for men at European courts were replaced with something new, the woollen suit. They were needed for the new world of business, long distance travel and blending in. Even in poorer families the men’s clothes for public life often cost more than the women’s. Suits were never uniformly black in the 19th century and trousers did not match coats until the 1880s.

Men also wore fashion to irritate. The dandies or “bucks” of the 1810s-30s wore finely tailored clothes to reject the vulgar materialism of the industrial era. The deliberate aim was to annoy or shock – épater – the bourgeoisie. Having the time to cultivate the perfect cravat was presented as the counterpoint of the hard-working businessman. Their look became associated with artists, writers and thinkers.

It was sport that transformed men’s fashion, something that can be traced back to the horse riding and jockeys of the 18th century and forward to the youth revolutions associated with the introduction of the weekend and dedicated leisure time, firstly in the US in the 1890s. 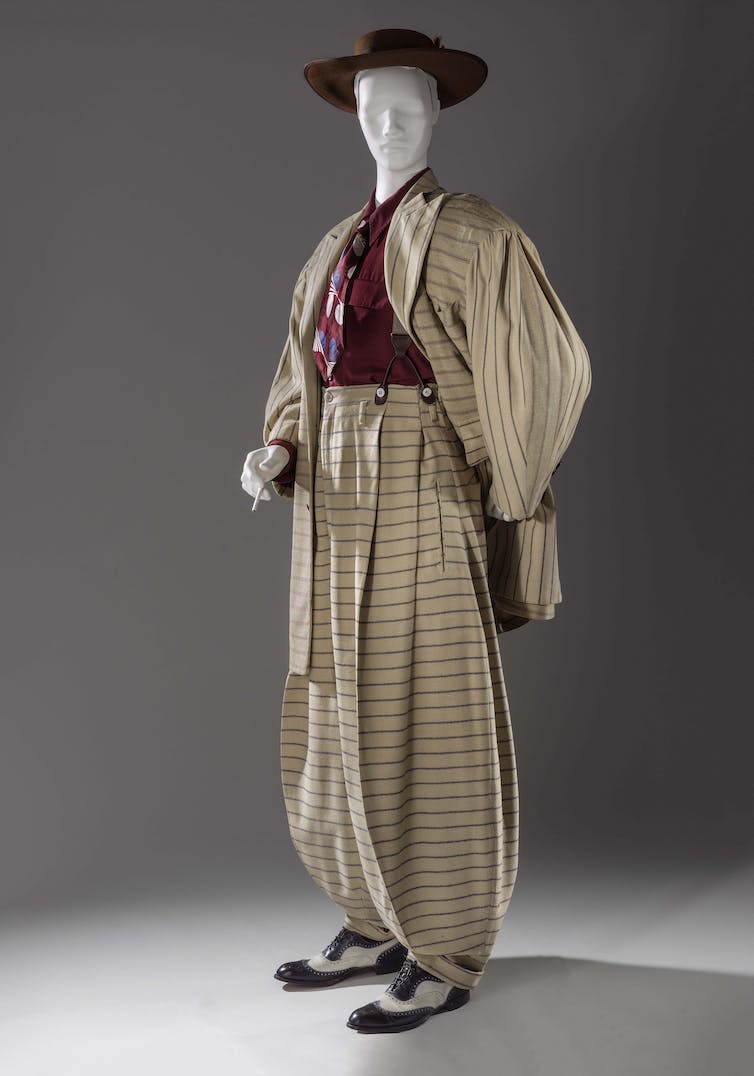 Active leisure and even smoking demanded new types of clothes. We might abhor smoking today, but it was one of the favoured activities for men. Cigarettes were picked up as a fashion during the Crimean War (1853-56) from the Russian and Turkish troops who rolled their own with left over cigar tobacco. Wealthy men wore bright coloured jackets and Turkish smoking caps in private. The returned fashion for beards was a hyper masculine statement at a time when women were making demands for education, suffrage and participation in public life. 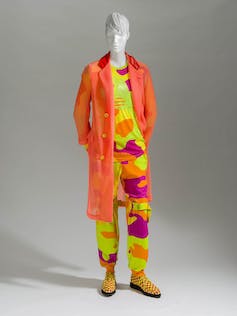 How did fashion for men become associated with homosexuality? Some macaronis were considered to be “sodomotical”, which was the term used in the 18th century. Men who worked in stores or hairdressers were called the “she-he gentry” and blamed for taking away the work of women. Oscar Wilde advocated dress reform for men; a return to colour; velvets and had his hair curled like a Roman Emperor. One consequence of his infamous 1895 trial for sodomy was that men expressly interested in fashion often became accused of homosexuality.

Yet fashion for men was about so much more than any single definition of (homo)sexuality. From the enormous zoot suits worn by Latino, black and Jewish men in the US in the 1940s (often leading to them being arrested or attacked), to the peacock males of the 1960s, punks of the 1970s and gay clubbers of the 1980s and 90s, fashion for men was often risky, even downright dangerous. Reading about attacks on gay and queer men around the world today, from Russia to Iran, we should remember that looking and appearing a certain way can be deadly even today.

Reigning Men: Fashion in Menswear 1715-2015 is published by Delmonico Books/Prestel 2015. The exhibit is at the Museum of Applied Arts and Sciences (Powerhouse) until October 2018. Peter McNeil’s Pretty Gentlemen: Macaroni Men and the Eighteenth-Century Fashion World is published by Yale University Press, April 2018.