One of the most popular video games of the last few years is a war game, PUBG, or PlayerUnknown’s Battleground. In this online multi-player game, 100 competitors parachute onto an island strewn with weapons and fight to be the last person (or squad) alive. Launched in 2017, its popularity exploded when it appeared on mobile phones in March 2018. It was reported to be the most downloaded app in over 100 countries, and the most downloaded game of the first quarter of 2018.

PUBG is based on a scenario that dates back to Roman times, when gladiators would fight each other to the death in the Colosseum as a form of entertainment. The idea of compulsory killing competitions as public spectacles has played out in dystopian films like Death Race 2000 and the Japanese film Battle Royale (an inspiration for PUBG), which have informed Hollywood blockbusters such as the Hunger Games trilogy.

But what kind of conflict is PUBG preparing its players for? On the one hand, in much of its appearance and gameplay, PUBG presents a thoroughly anachronistic form of warfare, similar to the experience of young soldiers who fought in the World Wars.

On the other hand, it’s a phenomenon very much of its time, preparing players for a world of forced competition and diminishing resources. Multiple strategies are required to survive: stealth and isolation, cooperation and sacrifice, confrontation and aggression.

Like many soldiers in the first world war, PUBG players can “die” from exposure to poison gas, in hand-to-hand combat, or through being shot by snipers and enemies they never even see. Every ditch, bush and rock in the PUBG landscape can be lifesaving cover. Common weapons include historic revolvers, single-shot rifles and Tommy guns.

At the same time, PUBG paints a picture of a disturbing future war that mixes high-tech weaponry (bots, automated weapons drops, remote location and health tracking) with scarcity and desperation. Players in PUBG aren’t in an organised army but a hastily assembled militia that must loot clothes, weapons and medicine. In this war, you might find an automatic weapon and body armour or be forced to defend yourself with a frying pan.

Players must negotiate the balance between self-interest and squad loyalty. They are randomly assigned to a squad of strangers, often without a common language. To cooperate and revive your temporary comrades is satisfying, while being ignored or betrayed by your own squad can be devastating.

Far from being set in the past or the future, PUBG feels like an immersive experience of today’s nightmares: a (literally) shrinking world of environmental scarcity, the breakdown of public order, lone shooters, weaponised vehicles and cyber armies.

Why does it appeal? In the face of these real-life scenarios, PUBG stresses individual agency, camaraderie and the promise of equal opportunity. Each player starts empty-handed, collecting resources that are scattered randomly and learning to survive longer and longer. Being the sole survivor of a match offers a great sense of accomplishment.

On the night before Anzac Day in Melbourne, as uniformed veterans were leaving the city on trams, the Melbourne Convention Centre hosted the opening round of the PUBG Australia Invitational. Despite its popularity on mobile phones, the tournament was played out on partitioned desktop computers set up on an enormous stage in the centre. 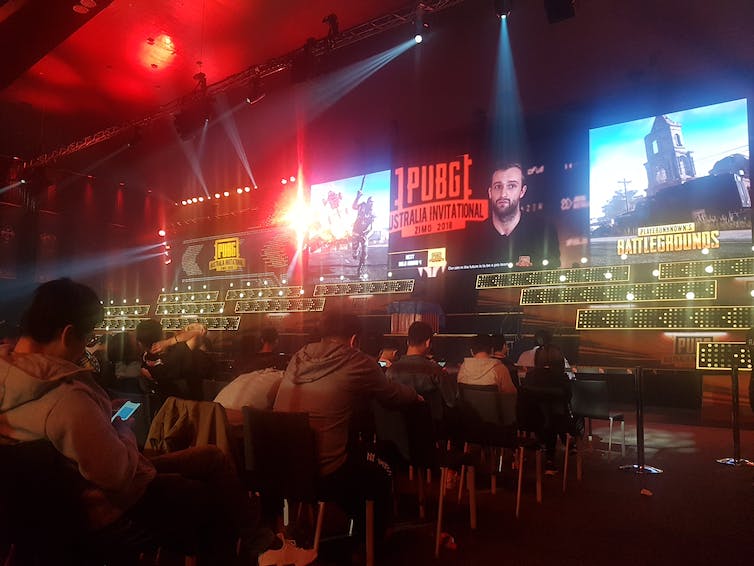 The Melbourne PUBG tournament, with 20 teams from across the Asia-Pacific competing for $150,000 in prize money, is part of the rise of eSports. This industry is forecast to grow by 38% to be worth $905.6 million in the coming year. However this is still only a fraction of the estimated US$100 billion in annual video game revenue overall. Recently 18,000 spectators crowded in Sydney’s Qudos Bank Arena to watch the three-day Intel Extreme Masters tournament.

eSports is full of contradictions, juxtaposing the language of elite training with unatheletic-looking bodies that aren’t traditionally associated with sporting success. In post-match interviews at the Melbourne tournament, the teenage winners spoke the careful, dogmatic language of professional sports people: one match at a time, team first, effort over results.

PUBG has been embraced in the Asia-Pacific region, where eSports has more than half of its 165 million enthusiasts. The game was originally threatened with a ban by Chinese regulators, who argued its tenor was a threat to the morals of young Chinese and an offence to socialist values.

However, after partnering with a Chinese company, and some mysterious “adjustments to content” in the game itself, PUBG has become hugely popular in China. Still, the game has courted a number of controversies, including hacking and cheating claims. Chinese police have reportedly arrested suspected PUBG hackers.

Gaming magazine PC Powerplay recently reported that Dell had advertised the speed of its latest computer to Chinese customers based on its ability to run unauthorised modifications or plug-ins in PUBG. These offer super-human powers such as x-ray vision, drone-like surveillance or invisibility cloaking. (The company later issued a statement condemning “any modifications misused in gaming”.)

The experience of PUBG is being shaped by a fascinating array of external geo-political forces, from state regulators and global businesses to teen sports stars and criminally-minded hackers. Meanwhile, inside the PUBG universe, players die happily, over and over, with their randomly-assigned, rag-tag armies, in a perverse echo of Australia’s ANZAC legend.