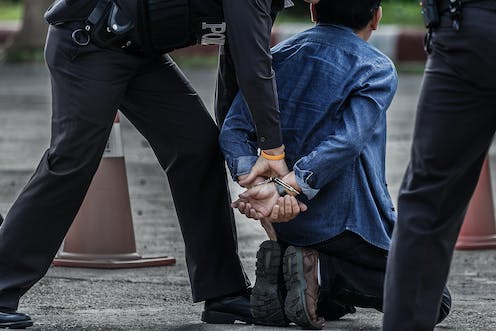 There have been a number of news articles over the last week or so reporting that to avoid being matched to criminal forensic databases, criminals could edit their genomes using cheap, online kits.

What seems to be at the centre of these articles, and giving them a sense of credibility, are some quotes from George Church – a highly respected geneticist from Harvard.

Asked if CRISPR could alter DNA to the extent it would make forensic evidence unusable, Church reportedly told The Telegraph:

We could do that today, easily. A lot of it is done by blood and even if you just get a stem cell transplant you have a new identity.

I could imagine there being an industry.

But is it really so easy? From our perspective there may be some confusion around what is feasible, and what is actually happening now. Let’s unpack some of the issues and think about what would be required to pull off such a feat.

Read more: From the crime scene to the courtroom: the journey of a DNA sample

The mainstay of modern DNA identification is short tandem repeat (STR) markers, which are small sections of DNA that vary by length (the number of repeats). Multiple STR markers are used to create a DNA profile.

Most systems now use a panel of 24 DNA markers, but some will allow partial matches of as few as eight or nine markers. It might be possible, in theory, to cheat the system by changing only one of these markers, but in practice a hypothetical DNA-edited criminal would probably want to change several of them.

STR markers are located in the more variable parts of our genome and this may make them more difficult to accurately target with gene editing tools. The easiest way to change your STR profile would probably be to delete some DNA and make the length of that marker shorter.

Technology for reading DNA is getting better, and DNA forensics is currently moving from STR markers to systems that look at more of our DNA and can tell us much more about someone.

In the recent Golden State killer case, so-called “SNP chips” – that measure around 600,000 sites in our genome – were used to make matches to genealogy databases. DNA forensics is a moving field and a future criminal may have to edit much more of their DNA to evade this sort of matching.

But how much of your body would you need to change to avoid detection? Is it just the cells that are used for sampling – for example your cheek cells, your blood cells – or every cell in your body?

As George Church seems to point out, in theory a genetic manipulation to your blood (or another targeted area) could allow a criminal to be excluded as a suspect. In the Golden State killer case, police used “discarded” DNA from the suspect’s trash. To fully evade DNA forensics you would therefore likely have to make much more extensive changes (i.e. skin, semen, hair, blood, cheek cells).

Let’s look at the techniques that might be used by someone wanting to alter their DNA.

CRISPR or CRISPR/Cas9, is a method for making precise edits to a genome.

For CRISPR to work it has to be delivered into cells. There are a number of ways to do this, but no one has published an effective way to change all of the cells in your body. Doing so is currently a formidable challenge.

It’s difficult to know exactly where we are with CRISPR in humans. There have been reports that the human immune system may attack the Cas9 enzyme required for CRISPR to work.

Human trials involving CRISPR are only just starting in western countries. China has conducted tests, but most of these involve removing immune cells, editing them and putting them back.

Read more: What is CRISPR gene editing, and how does it work?

There are reports that CRISPR doesn’t always modify all cells, and if criminals actually start using these kinds of techniques then law enforcement is going to be more alert to “mixed signal” samples.

The CRISPR Kit linked to in a Daily Mail article is from ODIN, a company that is part of the “DIY Bio” movement. The specific kit mentioned is designed to let someone edit bacteria.

The CEO of ODIN – Josiah Zayner – has, however, previously injected himself with CRISPR DNA that would enhance his muscles. At best this stunt is unlikely to work, and at worst could be quite damaging.

Community involvement in biology isn’t a bad thing, but modifying your own genome using CRISPR really isn’t something you should be doing at home on yourself. We don’t yet fully understand how this gene editing technology might affect other parts of our genome.

The US Food and Drug administration has highlighted that DIY gene therapy is illegal and risky. The legality may not concern a criminal, but the potential for off-target effects should.

Another way to change your genetic code is stem cell replacement. This has a precedent with some people that have had stem cell or bone marrow transplants.

Studies have looked at the DNA in cells of people who have received donor stem cells.

They report both donor and recipient DNA – this is known as “chimerism”, two different genomes – from many types of tissue and fluid, including mouthwash, oral swabs, and fingernails, sometimes years after stem cell transplants have taken place.

Hair follicles were thought to be unaffected by chimerism, but the genetic material from the Y chromosome of male donors has been detected in hair follicles of female recipients in at least two studies, suggesting that bone marrow replacement could affect much more of your body than originally thought.

So varying your DNA through stem cells is feasible, but as noted by Church:

CRISPR actually would be easier than a stem cell transplant because (a transplant) would have to be done sterilely and you would need to irradiate yourself to get rid of the old ones.

Changing out all of your bone marrow would be an extreme medical procedure.

What can we learn from this?

Changing your DNA profile to evade criminal databases is technically possible but it seems highly unlikely that criminals are actually doing this now. It probably wouldn’t even be effective with a DIY-bio kit. If any criminals are inspired to try and CRISPR themselves we would strongly recommend that they don’t.

George Church may have been speaking about what is possible in a somewhat hypothetical sense, and his quotes may have been taken out of context in some media coverage.

Sensationalised or not, this story is a useful thought exercise that reminds us how the world as we know it could change as the code of life starts to become re-writable.