More than half a century has passed since high-speed rail (HSR) effectively began operating, in Japan in 1964, and it has been mooted for Australia since 1984. I estimate that the cost of all HSR studies by the private and public sectors in Australia exceeds $125 million, in today’s dollars. But the federal government is now less interested in high-speed rail (now defined as electric trains operating on steel rails at maximum speeds of above 250km per hour), and instead favours “faster rail” or medium-speed rail.

The 2017 federal budget provided $20 billion over the next 10 years for rail, with more allocated in the 2018 budget. It is now time for Australia to commit to medium-speed rail (trains operating on new or existing tracks at speeds of between 160km and 250km/h).

Indeed, three states have made progress in developing trains at 160km/h, with Victoria leading the way. New South Wales has failed to keep up with these states.

What happened to high-speed rail in Australia?

The first high-speed rail system dates back to 1964 when the Tokaido Shinkansen started operating between Tokyo and Osaka. At first, it took four hours to travel 515 kilometres; now some trains take two-and-a-half hours. Japan’s system has an impeccable safety record and the network extends for over 3,000km. 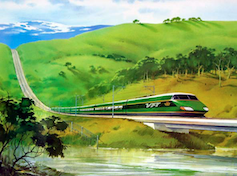 An image prepared in 1984 by the late Phil Belbin of what the Very Fast Train south of Canberra could look like. Courtesy of Railway Digest (ARHS/NSW) June 2004, Author provided

France was next in 1981 with its TGV trains. In 1984, high-speed rail was first proposed for Australia. This was the CSIRO’s Very Fast Train proposal to link Sydney, Canberra and Melbourne using TGV trains.

At all levels, government was not supportive. The private sector, after a series of studies, found it was viable and could work with different taxation arrangements. This was not forthcoming and work stopped in 1991.

An image from the 1990s of a SpeedRail train at Central Station. Courtesy of Railway Digest (ARHS/NSW), Author provided

A more modest proposal, called Speedrail, to connect Sydney and Canberra was proposed in the mid-1990s. With some federal government encouragement, it was studied, with detailed design. It was costed at about $4.5 billion, with finance arranged for some $3.5 billion. The Howard government would not fund the balance and commissioned yet another HSR study.

More studies have followed. One study in 2013 put a price tag of $23 billion on a Sydney-Canberra line involving much tunnelling in Sydney. This was part of a 1,750km high-speed rail corridor linking Brisbane, Sydney, Canberra and Melbourne. The total estimated cost was A$114 billion.

Despite many studies recommending the need to identify and protect a corridor for a future high-speed rail network, government has failed to reserve any land corridors (with the exception of part of a future Melbourne outer metropolitan ring road).

What about the alternatives?

Many countries do not have high-speed rail, but have medium-speed rail (MSR) instead. These countries include Sweden, Switzerland, the United States and Canada. 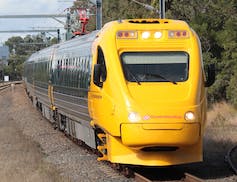 Three Australian states have trains operating at 160km/h. These are Queensland, starting in 1998 with its Electric Tilt Train service between Brisbane and Rockhampton, Victoria, with its Regional Fast Rail project using V/Locity diesel multiple units, and Western Australia, with the Prospector train.

Victoria’s service originated in 1999 when the then Labor opposition promised a new deal for regional Victoria, which included new trains and upgraded tracks on four lines to Bendigo, Ballarat, Geelong and Gippsland. The ALP won government that year. By 2006 the track upgrades were delivered along with new trains made in Victoria.

People liked the faster trains. Patronage went up by more than 15% in each of the first three years of operation. More trains were ordered and further major track upgrades followed.

Victoria was assisted by $3 billion in federal funding for a Regional Rail Link program. This was to provide new intercity tracks in Melbourne so suburban trains did not slow down regional trains.

Due to good ongoing planning attracting more federal funding, further track upgrades are under way. The 2017 Victorian Infrastructure Plan outlines priorities and funding for projects over the next five years, with longer-term policy directions.

So what’s going on in NSW?

Questions are now being asked as to why Victoria and WA are doing do well with federal funding for passenger rail at the expense of NSW.

The rail situation in Australia’s most populated state is not good for its regions. By far the most NSW government attention and funding has gone into the Greater Sydney region.

To try to cope with this increasing demand for rail a new Metro section is due to be completed in 2019. Light rail is also being introduced in Sydney, Newcastle and Parramatta.

Sydney continues to have serious road traffic problems, which are unlikely to be solved by WestConnex Stages 1 and 2 that are now under construction. The proposed Stage 3 received over 7,000 objections, including a sensible alternative proposal by the City of Sydney, but the NSW government has approved Stage 3 and even more motorways. This is despite overseas experience for cities the size of Sydney pointing to the best solution being a much-improved rail system with road congestion pricing.

Regional NSW is also growing in population, albeit not as quickly as Sydney. In spring 2017, Transport for NSW released a draft regional servicea and infrastructure plan not for the next five years, but out to 2056. However, these plans were very vague as to what may be delivered in the next five or even ten years.

The plans also omitted earlier Infrastructure NSW goals for Sydney-Gosford and Sydney-Wollongong trains to take one hours (instead of one-and-a-half) and Sydney-Newcastle trains to take two hours. In addition, there are calls for more and faster trains linking to each of Goulburn/Canberra and the Central West of NSW. 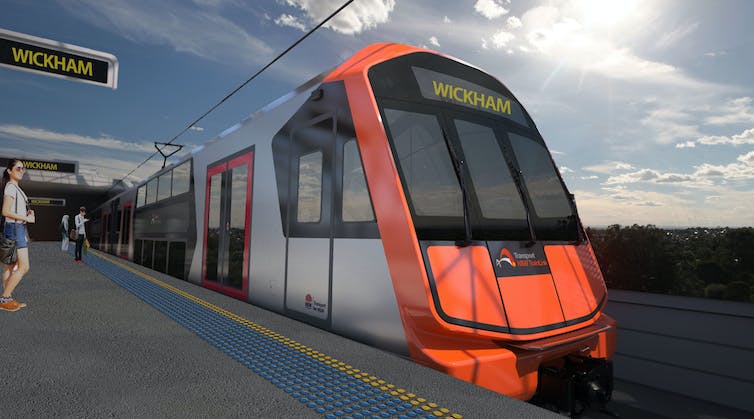 NSW is getting new intercity trains, but not upgraded tracks that will enable them to go faster than the present slow services. NSW government/AAP

Clearly, NSW is facing major transport challenges to overcome rail infrastructure backlogs and meet the needs of a growing population.

The state government is getting new intercity electric trains and has committed to buying new regional trains. But it’s yet to commit to track upgrades to help the new trains go faster than the present slow ones.

The NSW ALP opposition is also yet to present detailed policies of how it would meet the transport challenges in Sydney and in regional NSW.

The people of NSW must hope the state budget due June 19 and the opposition leader’s reply will address these issues.