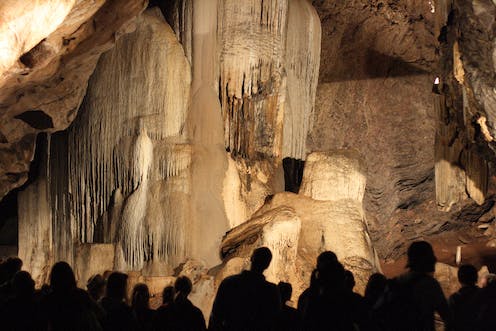 “Marsupial lions” lived on the Australian continent from about 24 million years ago up until the end of the Pleistocene era, about 30,000 years ago.

Of course they weren’t really lions, but an extinct species of marsupial with lengthened premolar teeth.

I’ve recently published a colonial history of the scientific identification and naming of the species Thylacoleo carnifex. It reveals the power dynamics that existed within colonial science, and the important and overlooked roles played by Aboriginal knowledge and testimony.

Read more: A new species of marsupial lion tells us about Australia's past

Lang saw the Wellington site as akin to the UK’s Kirkdale fossil caves, discovered by William Buckland in 1821. The Kirkdale caves contained fossilised hyenas and their prey. Comparing the two sites led him to speculate that the Wellington fossils were dragged into the caves by some, as yet unknown, “beast of prey”.

According to Lang, in the absence of local palaeontological experts, the best way to determine whether a fossil was from an extinct or still living animal was to consult local Indigenous people.

Read more: The Dreamtime, science and narratives of Indigenous Australia

In 1842, the Wellington finds and local Aboriginal knowledge led the Queensland squatter Frederick Isaacs to search for fossil sites in his recently acquired Darling Downs sheep station. The search was sandwiched between his farming and involvement with frontier conflict.

Once he found fossils, Isaacs established contact with the British comparative anatomist Richard Owen. During and after his life Owen gained a reputation as a controlling agent of scientific imperialism that “reached out its tentacles” across the globe, robbing colonists of their scientific dues.

Unaware of or uncaring about Owen’s dubious character, Isaacs wrote to him detailing how the fossils were usually found in washed-out dry creek beds and waterholes. He also reported discussions with local Aboriginal people (the two main groups in the area were the Giabal and Jarowair) about a “tradition relative to a very large animal having at one time existed in the large creeks and rivers” and how local Aboriginal people, when shown large fossil bones, attributed them to this creature.

In 1843 the pastoralist William Adeney found fragments of an animal skull at lake Colongulac in Victoria’s Western district. This skull was one of two specimens later used by Owen to describe Thylacoleo carnifex.

When describing the circumstances of his find to Owen, Adeney wrote how “the blacks” called the fossils “old men’s bones and some said they were the remains of the bunyip”.

This speculation was part of an emerging practice of crediting Aboriginal testimony and bunyip mythology when discussing extinct predators.

In 1845, Victorian colonists discovered the “knee joint of some gigantic animal” at Lake Colongulac (where Adeney found the Thylacoleo cranium) and showed it to a man described by them as an “intelligent black” who identified it as belonging to a bunyip.

Colonists repeated this procedure several times, and a picture emerged of a still living amphibious predatory creature that looked like a cross between an alligator and a bird. It was described as twelve to fifteen feet tall, “furnished with long claws” and usually killing its prey by “hugging it to death”.

One visiting Boonwurrung man, Mumbowran, even claimed that scars on his back were from a bunyip attack. There were serious discussions within the emerging Australian scientific press about whether bunyips still existed, were extinct predators, or were completely mythological.

Owen was emboldened by these debates, as well as his inspection of both Wellington Caves fossils sent to him by the explorer Thomas Mitchell and Adeney’s fossil cranium.

One man took the credit

In 1845, Owen published an article arguing that the presence of large extinct herbivores mean that “some destructive species” of carnivore must have existed. This prediction inspired the search for more fossil megafauna and further evidence of extinct marsupial predators.

In 1853 a fossil jaw fragment was discovered in the Darling Downs. Samuel Stutchbury, the NSW Mineralogical Surveyor, found the fossil. He speculated that it was from a marsupial predator and sent a cast to Owen.

Read more: How a German migrant planted citizen science in Australia – and why it worked

Four years after receiving the cast Owen combined Adeney and Stuchbury’s fragments and created Thyalcoleo carnifex and described it as one of “the fellest and most destructive of predatory beasts.”

Owen’s classification validated his earlier prediction and helped him defend his methods from attack in both the United Kingdom and the Australian colonies. He downplayed the role of colonial contributors to his discovery and largely ignored the role of Aboriginal testimony and knowledge in creating the marsupial lion.