Australian scientist Mark Oliphant, who helped push the United States to develop the atomic bombs in World War II, also played a major role during the war in attempting to stop the US dominating the UK in any further development of nuclear weapons.

Details of the Adelaide-born physicist’s efforts are included in new research published today in the CSIRO’s Historical Records of Australian Science, based on documents sourced from the UK Cabinet archives.

These archival documents reveal how Oliphant attempted a British rebellion against scientific collaboration with the US that escalated all the way to the top of Britain’s wartime leadership.

Read more: How Melbourne activists launched a campaign for nuclear disarmament and won a Nobel prize

The rise of the physicist

Oliphant (1901-2000) described himself as a “belligerent pacifist” and his humanitarianism and compassion forms an indelible image of the gentle giant of Australian science.

After studying at the University of Adelaide he moved to the Cavendish Laboratory at Cambridge in the UK. Oliphant joined a freewheeling cabal of atomic physicists led by fellow antipodean Ernest Rutherford. He later took up a position at Birmingham University.

But soon the war was to change everything for him.

In late 1938, nuclear fission of uranium was discovered in Berlin and within months the thunderclap of war clattered over Europe. After convincing the Americans of the potential of an atomic bomb in 1941, Oliphant joined the Manhattan Project in 1943 as a leading member of the collaborative British Mission.

At war with secrecy

Oliphant found that wartime secrecy was totally opposite to the usual culture of open science. The US military police opened his mail, and the FBI interrogated him on his casual attitude to rules.

In September 1944 Oliphant complained of his restrictions to the US Army’s no-nonsense military head of the project, General Leslie Groves. Groves was frustrated with progress and gave Oliphant a lecture on war and security.

In doing so, the cabinet documents on Oliphant’s notes show that the normally circumspect Groves also let slip that the US had no intention of honouring an agreement with the British to share atomic technology after the war. Groves stated that even after the war America needed to prepare for an “inevitable war with Russia”.

In this conversation Groves insisted that he spoke for the armed forces and for every thinking man and woman in U.S.A. He said that any effort U.K. might make must be confined to central Canada. He excluded specifically Australia or any other part of the Empire. Every possible source of supply of raw materials would be monopolised and controlled by U.S.A.-U.K.

How to warn the UK?

Oliphant saw weapons development as merely a vehicle on which to carry the potential of almost limitless energy and he was intent on resuming his open research after the war.

He could not risk his mail being opened again. So he headed from Berkeley, California to the British Embassy in Washington to write a secret report to London detailing his conversation with Groves.

Oliphant had a plan. He proposed that, without delay, the entire British Mission leave the Manhattan Project, return to Britain and restart their own programs. In late 1944 he seemingly had traction and the British project, code-named Tube Alloys, was reinvigorated with new plans tabled to construct uranium isotope plants.

Oliphant’s plan escalated up the chain to Lord Cherwell, then Prime Minister Winston Churchill’s scientific advisor, and to Sir John Anderson, the Chancellor of the Exchequer and the authority on atomic matters inside the British War Cabinet.

Oliphant’s bombast, confidence and directness is famous. As he approached the door of 11 Downing Street (the official residence of the Chancellor of the Exchequer) on January 9, 1945, he was likely optimistic that his meeting with Sir John would result in a decision to follow his new plan.

But Sir John was in a pessimistic mood. There was still a war on, and the allies were being pushed back by the Nazis at the Battle of the Bulge. Sir John put a stop to talk of this scientific rebellion, and ordered Oliphant back to America to complete the job. 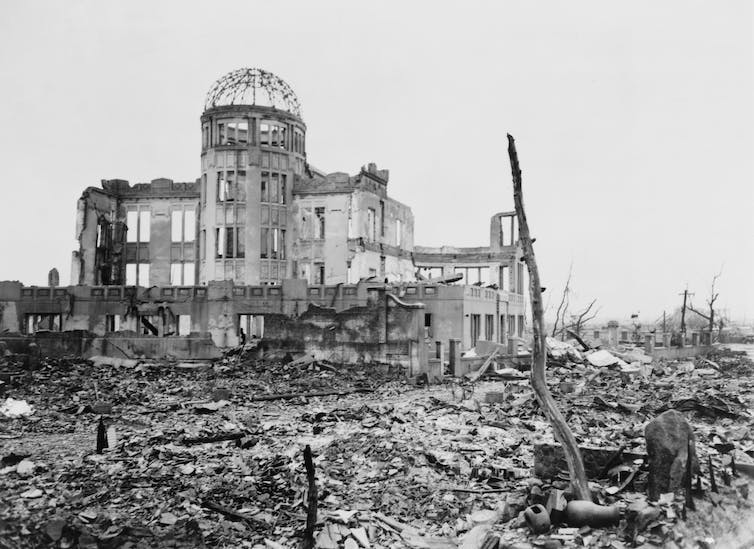 The wrecked framework of the Museum of Science and Industry in Hiroshima, Japan, shortly after the dropping of the first atomic bomb, on August 6, 1945. Shutterstock/Everett Historical

In mid-1946 the newly formed United Nations debated control of atomic technology and Oliphant was in New York as an Australian advisor. He and other scientists pushed a plan to abolish weapons and throw the science open.

The alternative, the scientists argued, would be an escalation of an arms race. Only openness in science could reduce suspicion between nations.

The US and the Soviet Union almost agreed to the plan. But the Americans refused a Soviet request to first destroy their atomic arsenal and the Soviets refused to allow UN inspections.

Read more: We may survive the Anthropocene, but need to avoid a radioactive 'Plutocene'

The US passed their Atomic Energy Act in August 1946 which prevented any collaboration on atomic technology. Oliphant’s prophecy came true. But the scientists had made another prophecy: atomic secrets cannot be contained.

As the critical mass of international scientists that had gathered together for war radiated back out around the world, they carried with them the secrets of the atom.

So the opportunity was lost in 1946 to abolish weapons, and today more than 14,000 nuclear weapons exist, held by nine countries. Even in a post-Cold War world this sword of annihilation hangs by a thread over the head of all us.