For people like me, light years, the expanding universe and the Big Bang are part of daily language.

You might perceive these as distant and abstract concepts, best left to professional astronomers with million-dollar telescopes.

Or perhaps not. I think you can experience cosmology from your backyard, just by looking at the night sky or using an amateur astronomer’s telescope.

Read more: Looking at the universe through very different 'eyes'

Space may be unimaginably vast, but you can experience and measure it for yourself. You can even measure the universe expanding.

Here’s are some tips on how to get there.

Tip 1: look up, and imagine

Look at the night sky. There are stars aplenty, but much of the sky is dark and this tells us something very important.

Imagine an infinitely large and old universe filled with stars. Travel in any direction and, eventually, you will run into a star. In this universe, an imaginary Earth’s night sky wouldn’t be dark - it would be spectacularly bright.

This is Olbers’ paradox, which has several escape clauses. A finite universe is one. Another is a universe with a finite age, so that light from distant objects hasn’t had time to reach us.

Without even grabbing a telescope, we’ve done some backyard cosmology. The dark sky we see from Earth hints at the universe’s finite age.

Now grab your telescope. Beautiful images of stars can be taken with a telescope and camera on an equatorial mount, which can track stars as they seem to move across the sky. Telescopes on equatorial mounts can cost less than A$1,000 (although the sky’s truly the limit with astronomical kit).

An equatorial mount is different from your typical camera tripod, as it has one axis aligned with Earth’s axis of rotation. The mount can track stars by rotating just one axis, and is literally a mechanical model of the spinning Earth. 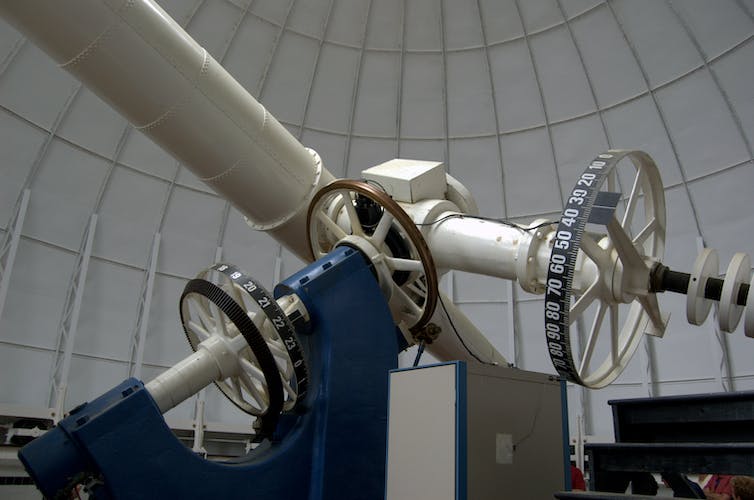 An equatorial mount has one axis aligned with the axis of rotation of the Earth. Flickr/Photo Phiend

Compared to your eye at the eyepiece, a telescope and camera on an equatorial mount can reveal more of the universe. With your eyes you can see, but with a camera you can measure, turning your telescope into a cosmology machine.

How far away are stars? Even small telescopes provide clues.

As Earth travels around the Sun, the direction to nearby stars will change. The nearest stars seem to move back and forth relative to more distant celestial objects.

This is parallax, and it’s a bit like using our two eyes to perceive distance, except using telescopic observations separated by the diameter of the Earth’s orbit around the Sun (300 million km).

If the nearest stars were located 12,000 times the Earth-Sun distance (1,800 billion km), their positions in the sky would change by a hundredth of a degree.

This sounds tiny, but this is about the same as the angular size of Jupiter, and would be easy to see with a backyard telescope. Instead, even the nearest stars are so far away that it’s a real challenge for backyard astronomers to measure their distances.

Some of the closest stars are easy to find but still unimaginably distant. Alpha Centauri, the brightest of “The Pointers” near the Southern Cross, is a pair of stars whose distance from us is 270,000 times the Earth-Sun distance. 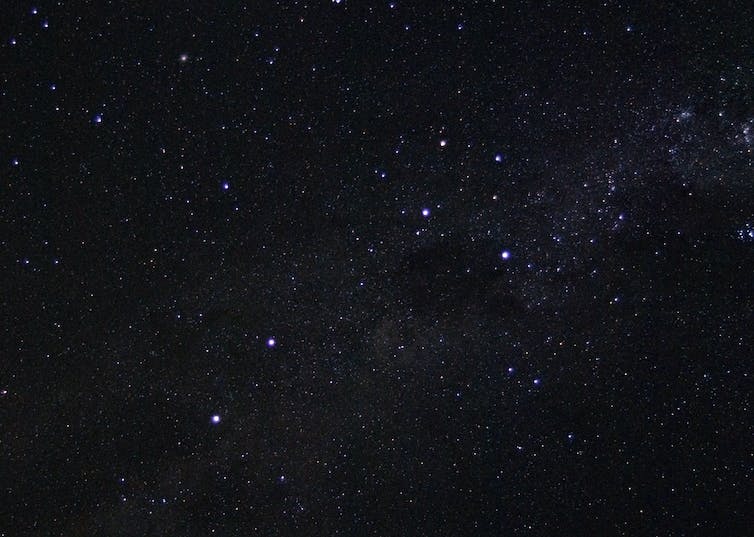 The two Pointers (bottom left) are bright neighbours of the Southern Cross (above right). Flickr/Ryan Wick, CC BY

Sirius, the brightest star in the sky, is a tad further at 540,000 times the Earth-Sun distance.

With a telescope, camera, and a little history, you can appreciate that some stars are even further still.

In 1908, American astronomer Henrietta Swan Leavitt discovered that stars known as Cepheids vary in brightness with a period that depends on their luminosity, or how bright they are. The longer the period, the brighter the star. Cepheids became the tool that allowed astronomers to measure distances to galaxies. 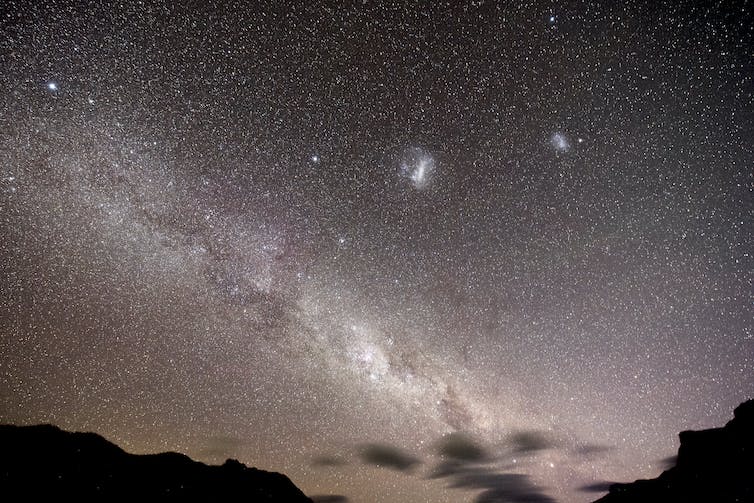 You can see the brightest Cepheids in the Large Magellanic Cloud, which is 160,000 light years away from Earth, with a telescope and eyepiece. With a camera, you can take images over time to measure Cepheids getting brighter and fainter, just as Henrietta Swan Leavitt did a century ago.

In 1923, Edwin Hubble detected a Cepheid in the Andromeda “nebula” and realised that Andromeda is another galaxy, containing many billions of stars. He concluded that the universe is vast and full of such galaxies.

With a telescope, a modern DSLR camera (or CCD) and long exposures at a dark site, you can spot the very star Hubble used to make his momentous discovery. A star so far away, its light takes two million years to reach us. 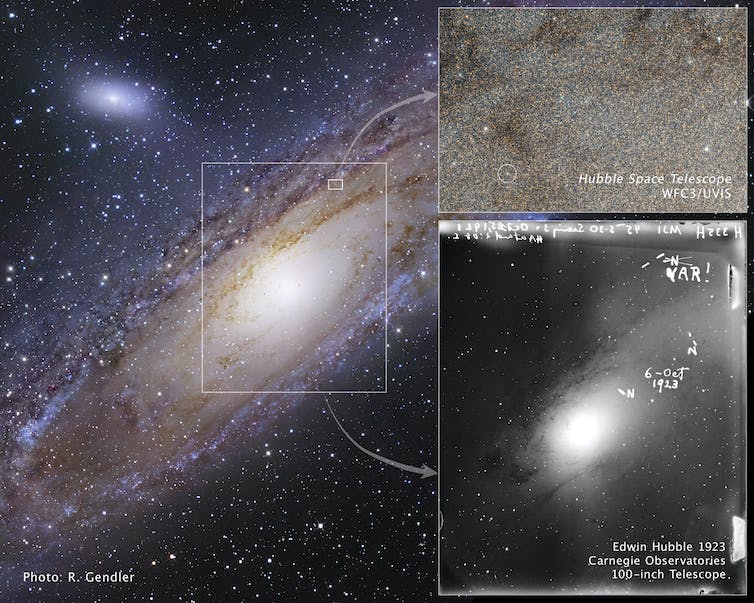 The expanding universe may be one of the strangest of cosmological discoveries. Most galaxies across the universe are rushing away from us and each other.

How can you measure the speed of galaxies across the vastness of space? With a speed camera, of course.

Hydrogen is the most abundant element in the universe, and it produces a very distinctive spectrum of light. We can see this spectrum in celestial objects if we add a diffraction grating to our telescope.

If we take spectra of quasars, some of the most luminous yet distant of astronomical objects, we can see the spectrum of hydrogen. But the emission lines are Doppler-shifted to redder colours (wavelengths) by the expanding universe.

Read more: You too can be an astrophysicist with your new telescope

You can observe the expanding universe, with your own telescope. 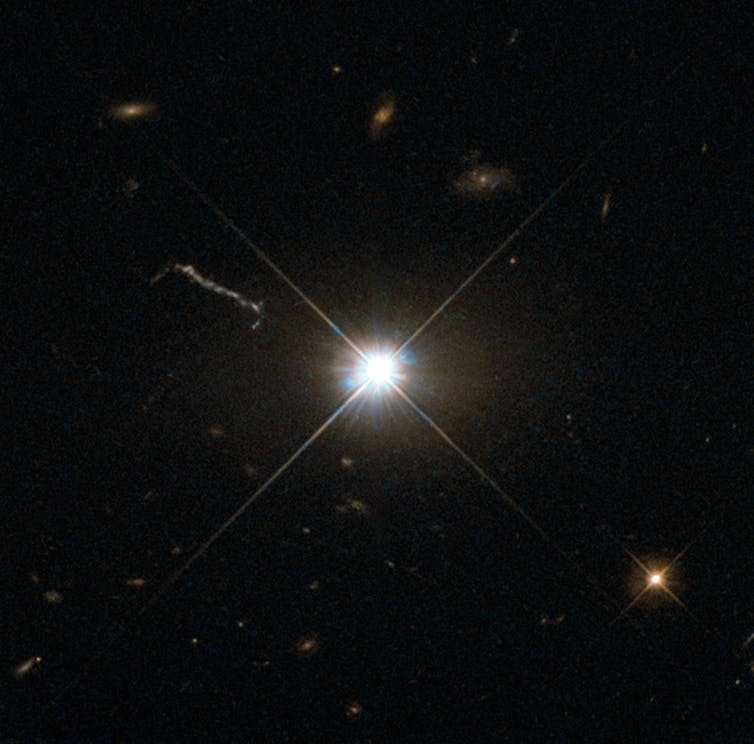 The spectrum of 3C 273, which can be measured by amateur astronomers, reveals the expansion of the universe. ESA/Hubble & NASA

Cutting-edge cosmology may require the Hubble Space Telescope, LIGO and the Square Kilometre Array. But if you’re organised, motivated, and have the budget for a few key items, you can be a backyard cosmologist.